Home » Business » Here’s how companies are responding to the rise in coronavirus cases. 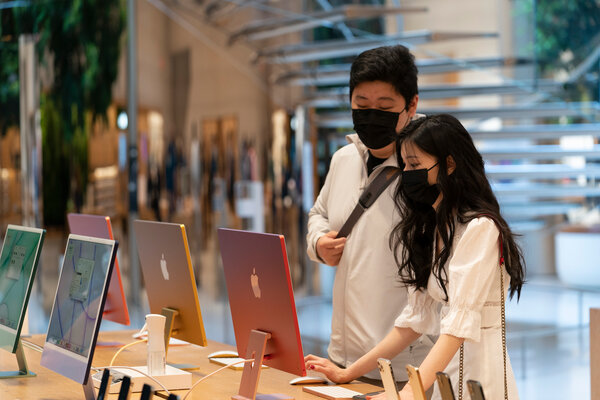 Companies are rushing to revisit their coronavirus precautions, with some mandating vaccines and pushing back targets for when employees are expected to return to the office, as cases rise across the United States, fueled by the Delta variant and slower pace of vaccinations.

Lyft said on Wednesday that it would not require employees to return to the office until February, while Twitter said it would close its newly reopened offices in San Francisco and New York and indefinitely postpone other reopening plans.

Their actions follow announcements by authorities in California and New York City that they will require hundreds of thousands of government workers to get inoculations or face weekly testing. And President Biden is set to announce that all civilian federal workers must be vaccinated or submit to regular testing, social distancing, mask requirements and restrictions on most travel.

Apple will start requiring employees and customers to wear masks regardless of their vaccination status in more than half of its stores in the United States, it said on Wednesday, a new sign that shopping in the country may soon resemble earlier days of the pandemic.

Google will require employees who return to the company’s offices to be vaccinated against the coronavirus. It also said it would push back its official return-to-office date to mid-October from September. Google has more than 144,000 employees globally.

Netflix will require the casts of all its U.S. productions to be vaccinated, along with anyone else who comes on set. It’s the first studio to establish such a policy.

Facebook will require employees who work at its U.S. campuses to be vaccinated, depending on local conditions and regulations. Facebook, which has roughly 60,000 workers, said in June that it would permit all full-time employees to continue to work from home when feasible.

The Durst Organization, one of the largest private real estate developers in New York City, is requiring all of its employees in nonunion positions to be vaccinated by Sept. 6 or face termination. Durst has about 350 nonunion employees and about 700 union workers.

The Walt Disney Company said Wednesday that it would require cast members and guests older than 2 to wear face coverings in all indoor locations at its Walt Disney World Resort and Disneyland Resort, effective July 30.