Home » Business » ‘I Have No Money for Food’: Among the Young, Hunger Is Rising

PARIS — Amandine Chéreau hurried from her cramped student apartment in suburban Paris to catch a train for an hourlong trip into the city. Her stomach rumbled with hunger, she said, as she headed for a student-run food bank near the Bastille, where she joined a snaking line with 500 young people waiting for handouts.

Ms. Chéreau, 19, a university student, ran out of savings in September after the pandemic ended the babysitting and restaurant jobs she had relied on. By October, she had resorted to eating one meal a day, and said she had lost 20 pounds.

“I have no money for food,” said Ms. Chéreau, whose father helps pay her tuition and rent, but couldn’t send more after he was laid off from his job of 20 years in August. “It’s frightening,” she added, as students around her reached for vegetables, pasta and milk. “And it’s all happening so fast.”

As the pandemic begins its second year, humanitarian organizations in Europe are warning of an alarming rise in food insecurity among young people, following a steady stream of campus closings, job cuts and layoffs in their families. A growing share are facing hunger and mounting financial and psychological strain, deepening disparities for the most vulnerable populations.

The reliance on food aid in Europe is surging as hundreds of millions of people around the world confront an intensifying crisis over how to meet their basic dietary needs. As the global economy struggles to rebound from the worst recession since World War II, hunger is on the rise.

In the United States, nearly one in eight households doesn’t have enough to eat. People in already food-starved countries face a greater crisis, with food insecurity in the developing world expected to nearly double to 265 million people, according to the United Nations World Food Program.

In France, Europe’s second-largest economy, half of young adults now have limited or uncertain access to food. Nearly a quarter are routinely skipping at least one meal a day, according to le Cercle des Économistes, a French economic think tank that advises the government. 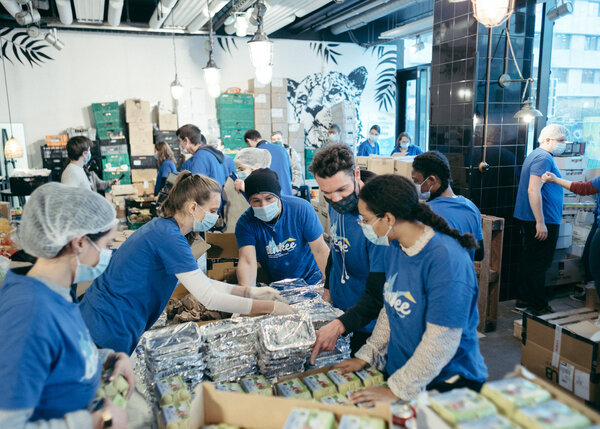 President Emmanuel Macron acknowledged a growing crisis after undergraduate and graduate students demonstrated in cities across France, where higher education is seen as a right and the state finances most costs. He announced a rapid relief plan, including 1-euro meals daily at university cafeterias, psychological support and a review of financial aid for those facing a “lasting and notable decline in family income.”

“Covid has created a deep and severe social emergency that has rapidly plunged people into hardship,” said Julien Meimon, president of Linkee, a nationwide food bank that set up new services dedicated to students who cannot get enough food. “Students have become the new face of this precariousness,” he said.

Food insecurity among students was not uncommon before the pandemic. But the problem has ballooned since European countries imposed national lockdowns last spring to contain the coronavirus.

Aid organizations that mainly fed refugees, the homeless and people below the poverty line have refocused operations to also meet a surge in demand among youth. At the Restos du Coeur, one of France’s largest food banks, with 1,900 outlets, the number of young adults under 25 lining up for meals has risen to become nearly 40 percent of the total.

Over eight million people in France visited a food bank last year, compared with 5.5 million in 2019. Food aid demand across Europe has surged by 30 percent, according to the European Food Banks Federation.

While the government subsidizes campus meals, it doesn’t provide food pantries. As the cost of staying fed grows insurmountable for students with little or no income, university administrators have turned to aid groups for help fighting hunger.

The pandemic has wiped out jobs in restaurants, tourism and other hard-hit sectors that were once easily accessible to young people. Two-thirds have lost work that helped them make ends meet, according to the National Observatory of Student Life.

“We need to work, but we can’t find jobs,” said Iverson Rozas, 23, a linguistics student at the New Sorbonne University in Paris whose part-time job five nights a week at a restaurant was cut to one, leaving him with just 50 euros to spend on food each month.

On a recent weeknight, he stood in a line stretching three city blocks for the Linkee food bank, near France’s National Library, together with students earning degrees in math, physics, law, philosophy or biology.

“A lot of people here never visited a food bank before, but now they are living hand-to-mouth,” Mr. Meimon said. Many thought such places were for poor people — not them, he added. To lighten the sense of stigma, Linkee tries to create a festive atmosphere with helpful volunteers and student bands.

Layoffs within a family deepen the domino effect. In France, where the median take-home pay is 1,750 euros (about $2,080) a month, the government has spent hundreds of billions of euros trying to limit mass layoffs and prevent bankruptcies. But that hasn’t shielded parents from the recession’s widening toll.

That was the case for Ms. Chéreau, a second-year history and archaeology major at Université Panthéon-Sorbonne whose family contributes around 500 euros a month to her expenses.

Shortly after she lost her student jobs, her father was thrown into unemployment when the company where he spent his career folded. Then her mother was put on paid furlough, cutting her earnings by over 20 percent.

When Ms. Chéreau exhausted her savings, she fell into debt. Then food in her pantry ran low, she stopped eating almost entirely, and she rapidly lost weight.

She had heard about the student food banks from friends and now, she said, they are the only way she is eating. Even so, she carefully rations what she gets, and drinks water to fight hunger between her once-a-day meals.

The latest on how the pandemic is reshaping education.