Rows of bright orange, 15-foot-tall robots — 307 of them, mainly from Sweden — whir with activity. They glue lightweight aluminum panels to vehicle frames using aerospace-grade adhesives. In an industry in which speed can mean cost efficiency, the assembly line plods along at half the pace of many lines elsewhere.

Even by the standards of the $1.6 trillion global car industry, an operation like this doesn’t come cheap. In fact, the Chinese operator of the factory, a company called Nio, loses thousands of dollars on every car it makes. State-run companies last year mustered a combined $2.7 billion to bail it out.

But Nio, or Chinese companies like it, could be the future of the global car industry. General Motors and other major names are increasingly betting that the next generation of rides will be powered by batteries alone, without a drop of gasoline or diesel. If so, China has invested so much money in the industry that it could hit the accelerator with ease.

An era of high-quality family electric cars that cost $25,000 or less is about to dawn, said William Li, Nio’s chairman and chief executive, and Chinese automakers can provide them.

Investors see promise in Nio, even though it has one factory, sold only about 7,200 cars last month and has never made a profit. Its $82 billion market capitalization exceeds G.M.’s and Ford’s. Its New York-traded shares have soared as high as nearly 30-fold in the last year. 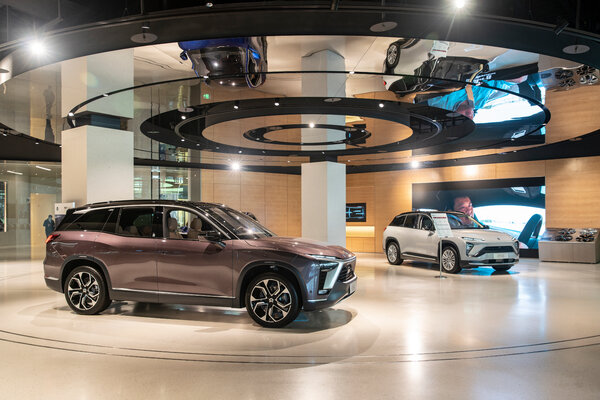 It is far from becoming China’s top electric car maker. In fact, the two best-selling electric car brands in China have American ties: Tesla, the maker of rides with price tags that can easily spill into six figures, and a joint venture among G.M. and two Chinese state companies that makes $5,000 microcars.

But Nio has the advantage of being able to tap into China’s vast and well-funded supply chain for electric vehicles. As President Biden mulls how much the United States should invest in electric cars, China already has 14 years of sustained government investment in the sector. China has also used regulations for more than a decade to force multinational companies to transfer their best electric technologies to joint ventures with Chinese manufacturers as a condition of entry into its vast market.

China makes 70 to 80 percent of the world’s battery chemicals, battery anodes and battery cells. China similarly controls most of the world’s output of high-strength magnets for electric motors, as well as the assembly of those magnets into motors.

Nio manufactures practically nothing for its cars by itself. While companies like Tesla make their own batteries and other crucial systems, Nio is able to order parts inexpensively from China’s diverse array of electronics manufacturers and auto parts suppliers.

Nio has just 120 engineers to manage its assembly plant in Hefei, the capital of Anhui Province in central China. Nio then pays JAC, a state-controlled automaker also based in Hefei, to send 2,300 experienced assembly line workers to run the factory.

“We have very small, close to zero, inventory,” said Victor Gu, general manager of the Nio factory. “It is a big challenge for the factory, because you need a quick turnaround.”

Nio also offers costly customer inducements under its brand, like its Nio Houses. Essentially clubhouses for owners of its cars, they provide coffee shops, libraries and even free day care centers. They take up expensive real estate in 19 Chinese cities, including one at the base of East Asia’s tallest building, the 128-story Shanghai Tower.

For a while, Nio also offered an extravagant perk: free recharging of any Nio car throughout a customer’s life, as long as the customer keeps buying Nio cars and taking them to one of the company’s 183 battery-swapping stations. While a customer sips a coffee, a technician swaps a depleted battery for a fully charged one.

“It only takes about five minutes and costs nothing,” said Neo Fan, a 38-year-old Shanghai commercial banker who paid $83,000 for his Nio ES8 minivan and is entitled to free recharges for the rest of his life.

Extravagance and the pandemic slammed Nio’s finances. The company lost $11,000 for each car sold in the July-through-September quarter.

Government firms stepped up to help. State-owned entities in Hefei joined a national state-owned investment fund last spring in paying $1 billion in cash to acquire a 24 percent stake in the company. Then, on July 10, the state-owned China Construction Bank led a consortium of banks in extending $1.6 billion in credit to Nio.

Nio’s chairman, Mr. Li, defended his company, portraying it as a start-up and noting that Tesla required many years before it managed last summer to post a fourth consecutive quarter of profits. “We’re very happy for Tesla, but this only happened after 17 years,” he said in an interview last autumn.

While Mr. Li envisions electric cars at $25,000 each sometime soon, Nio’s cars are now almost as expensive as Tesla’s. Nio’s entry-level sedan, the ET7, has a starting price of $58,500 with a 70 kilowatt-hour battery, which can take the car 310 miles. Nio plans a new ET7 model late next year with a much better battery that will double that range.

The company emphasizes making its cars light, for better driving range. Nio estimates that replacing steel with costly aluminum saves 700 pounds for each car. Nio uses part of the weight savings to add other gear, like two electric motors in each car instead of one. That provides better vehicle handling, but it also adds complexity and cost.

Nio allows buyers to customize their cars, including six types of wheels, 11 colors and so many other options that the factory can go a month without building two identical cars. That forces workers to vary their routines constantly.

Mr. Gu, the factory’s general manager, said his operation was designed to run at just 20 cars an hour. Many auto assembly lines run twice as fast.

Nio has had little problem finding money lately. It sold more shares in December in New York, raising $2.6 billion. That is enough money to build a whole row of factories — and Nio already plans to expand production considerably.

Government support for electric cars remains crucial, and Nio appears to be in good official graces.

One recent indication came in September, when a former top Communist Party official, Li Yuanchao, paid an unexpected visit to Nio’s display at the Beijing auto show. Mr. Li was replaced as China’s vice president in 2018 but remains prominent.

“It was my first time to talk with him,” Mr. Li, Nio’s chairman, said afterward. “He actually offered many suggestions about battery technology, for how to swap batteries.”