Home » Business » In GameStop Saga, Robinhood Is Cast as the Villain

Politicians from both parties wanted to identify a villain for the mania that surrounded the trading in GameStop stock last month that roiled the markets, alarmed Wall Street and made winners and losers of many small investors. On Thursday, they took aim at the chief executive of Robinhood, the free trading app that fueled much of the buying and selling.

At a congressional hearing conducted via videoconference, members of the House Financial Services Committee grilled Vlad Tenev: Why did Robinhood curb trading in GameStop? Was the start-up doing the bidding of Wall Street? And how clearly did it communicate its business model to its customers?

Lawmakers called the hearing to try to make sense of why the stock of GameStop — a troubled video game retailer that was once a mainstay of suburban malls — had attracted so many small investors in late January. They also wanted to know whether Wall Street players that were involved in the trading benefited at the expense of those small investors, and whether the events highlighted shortcomings of market structure or regulation.

But mostly, they wanted to know if Robinhood, a Silicon Valley start-up that rode to success on the strength of its message to democratize finance, was actually encouraging customers to take unnecessary risks and making money at their expense.

Along with Mr. Tenev, those called to testify were Kenneth C. Griffin, the founder of Citadel, a hedge fund, and Citadel Securities, a trading firm; Gabriel Plotkin, the founder of a hedge fund that lost money on GameStop; Keith Gill, an individual investor whose bullish posts about GameStop drove some of the buying; Steve Huffman, the chief executive of Reddit; and Jennifer J. Schulp, a financial markets expert.

The panelists appeared remotely from their homes and offices in a setup that led to several moments of absurdity and online humor, requiring lots of reminders for participants to mute their microphones.

‘Roaring Kitty’ Says He Will Continue to Invest in GameStop

Keith Gill, known on YouTube as Roaring Kitty and on Reddit’s Wall Street Bets forum as D.F.V., joked that he was “not a cat” and defended his GameStop investment during a House Financial Services Committee hearing.

It is true that my investment in that company multiplied in value many times. For that, I feel enormously fortunate. I also believe the current price of the shares demonstrates that I’ve been right about the company. A few things I am not — I’m not a cat. I am not an institutional investor, nor am I a hedge fund. I do not have clients. And I do not provide personalized investment advice for fees or commissions. I’m just an individual whose investment in GameStop and posts on social media were based upon my own research and analysis. Early June of 2019, the price of GameStop stock declined below what I thought was its fair value. I invested in GameStop in 2019 and 2020 because as I studied the company, I became more and more confident in my analysis. When I wrote it and spoke about GameStop on social media with other individual investors, our conversations were no different from people in a bar or on a golf course or at home talking or arguing about a stock. Hedge funds and other Wall Street firms have teams of analysts working together to compile research and analyze shares of companies. Individual investors do not have those resources. Social media platforms like Reddit, YouTube and Twitter are leveling the playing field. As for what happened in January, others will have to explain it. It’s alarming how little we know about the inner-workings of the market. And I am thankful that this committee is examining what happened. I also want to say that I support retail investors’ right to invest in what they want when they want, to support the right of individuals to send a message based on how they invest. As for me, I like the stock. 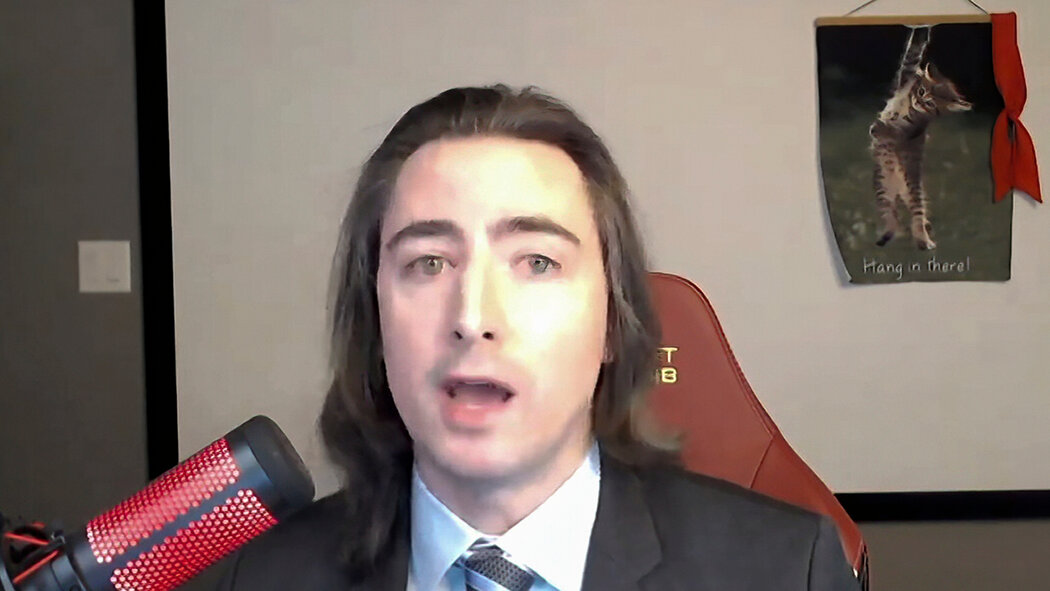 Mr. Gill, known as Roaring Kitty, appeared in his home office in front of a poster of a kitten. At one point he said, “I am not a cat,” echoing a recent viral event in which a lawyer appeared at a judicial hearing with a cat filter in his Zoom window.

Most of the panelists were major players during a two-week period last month, when millions of small investors egged on one another via Reddit and other online forums to buy GameStop, driving the stock to stratospheric levels. Those small investors were at least partly motivated by a desire to hurt big Wall Street firms, like Mr. Plotkin’s Melvin Capital, which had bet that GameStop’s shares would fall as online gaming and streaming became more prevalent.