Home » Business » Jamie Dimon predicts an economic boom that ‘could easily run into 2023.’ 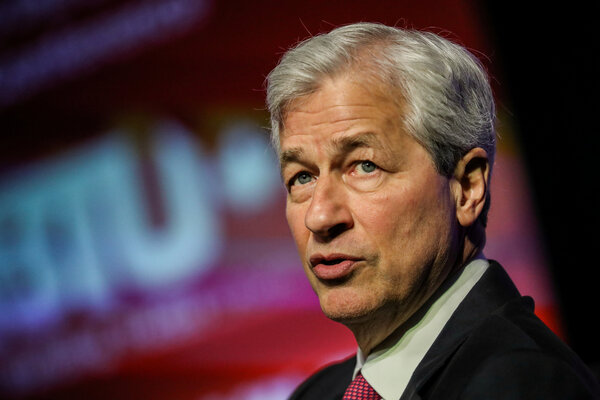 The annual letter to shareholders by JPMorgan Chase’s chief executive, Jamie Dimon, was published early Wednesday. The letter, which is widely read on Wall Street, is not just an overview of the bank’s business but also covers Mr. Dimon’s thoughts on everything from leadership lessons to public policy prescriptions.

“The U.S. economy will likely boom.” A combination of excess savings, deficit spending, vaccinations and “euphoria around the end of the pandemic,” Mr. Dimon wrote, may create a boom that “could easily run into 2023.” That could justify high stock valuations, but not the price of U.S. debt, given the “huge supply” soon to hit the market. There is a chance that a rise in inflation would be “more than temporary,” he wrote, forcing the Federal Reserve to raise interest rates aggressively. “Rapidly raising rates to offset an overheating economy is a typical cause of a recession,” he wrote, but he hopes for “the Goldilocks scenario” of fast growth, gently increasing inflation and a measured rise in interest rates.

“Banks are playing an increasingly smaller role in the financial system.” Mr. Dimon cited competition from an already large shadow banking system and fintech companies, as well as “Amazon, Apple, Facebook, Google and now Walmart.” He argued those nonbank competitors should be more strictly regulated; their growth has “partially been made possible” by avoiding banking rules, he wrote. And when it comes to tougher regulation of big banks, he wrote, “the cost to the economy of having fail-safe banks may not be worth it.”

“China’s leaders believe that America is in decline.” The United States has faced tough times before, but today, “the Chinese see an America that is losing ground in technology, infrastructure and education — a nation torn and crippled by politics, as well as racial and income inequality — and a country unable to coordinate government policies (fiscal, monetary, industrial, regulatory) in any coherent way to accomplish national goals,” he wrote. “Unfortunately, recently, there is a lot of truth to this.”

“The solution is not as simple as walking away from fossil fuels.” Addressing climate change doesn’t mean “abandoning” companies that produce and use fossil fuels, Mr. Dimon wrote, but working with them to reduce their environmental impact. He sees “huge opportunity in sustainable and low-carbon technologies and businesses” and plans to evaluate clients’ progress according to reductions in carbon intensity — emissions per unit of output — which adjusts for factors like size.

Other notable news (and views) from the letter:

With more widespread remote working, JPMorgan may need only 60 seats for every 100 employees. “This will significantly reduce our need for real estate,” Mr. Dimon wrote.

JPMorgan spends more than $600 million a year on cybersecurity.

This was Mr. Dimon’s longest letter yet, at 35,000 words over 66 pages. The steadily expanding letters — aside from a shorter edition last year, weeks after Mr. Dimon had emergency heart surgery — could be seen as a reflection of the range of issues top executives are now expected, or compelled, to address.