The stock market will not quit.

Already notable for its mostly unstoppable rise this year — despite a pandemic that has killed more than 300,000 people, put millions out of work and shuttered businesses around the country — the market is now tipping into outright euphoria.

Big investors who have been bullish for much of 2020 are finding new causes for confidence in the Federal Reserve’s continued moves to keep markets stable and interest rates low. And individual investors, who have piled into the market this year, are trading stocks at a pace not seen in over a decade, driving a significant part of the market’s upward trajectory.

“The market right now is clearly foaming at the mouth,” said Charlie McElligott, a market analyst with Nomura Securities in New York.

The S&P 500 index is up nearly 15 percent for the year. By some measures of stock valuation, the market is nearing levels last seen in 2000, the year the dot-com bubble began to burst. Initial public offerings, when companies issue new shares to the public, are having their busiest year in two decades — even if many of the new companies are unprofitable.

Few expect a replay of the dot-com bust that began in 2000. That collapse eventually vaporized about 40 percent of the market’s value, or more than $8 trillion in stock market wealth. And it helped crush consumer confidence as the country slipped into a recession in early 2001.

But it’s increasingly common to hear market analysts refer to that time when trying to make sense of current market trends.

“We are seeing the kind of craziness that I don’t think has been in existence, certainly not in the U.S., since the internet bubble,” said Ben Inker, head of asset allocation at the Boston-based money manager Grantham, Mayo, Van Otterloo. “This is very reminiscent of what went on.”

The gains have held up even as the fate of an economic stimulus bill passed by Congress was thrown into question when President Trump denounced it. Though the stock market ended with a small loss this past week, the S&P 500, Dow Jones industrial average and Nasdaq are just shy of record highs.

There are reasons for investors to feel upbeat. The Electoral College voted on Dec. 14 to formalize the victory of President-elect Joseph R. Biden Jr., bringing an end to a contentious presidential election that had weighed on markets. A nationwide inoculation push against the coronavirus has begun, signaling the start of an eventual return to normal.

Many market analysts, investors and traders say the good news, while promising, is hardly enough to justify the momentum building in stocks — but they also see no underlying reason for it to stop anytime soon.

Yet many Americans have not shared in the gains. About half of U.S. households do not own stock. Even among those who do, the wealthiest 10 percent control about 84 percent of the total value of these shares, according to research by Ed Wolff, an economist at New York University who studies the net worth of American families.

Perhaps the clearest example of unbridled investor enthusiasm comes from the market for I.P.O.s. With more than 447 new share offerings and more than $165 billion raised this year, 2020 is the best year for the I.P.O. market in 21 years, according to data from Dealogic. (In 1999, 547 I.P.O.s raised roughly $167 billion in today’s dollars.) Investors have embraced small but fast-growing companies, especially ones with strong brand names. 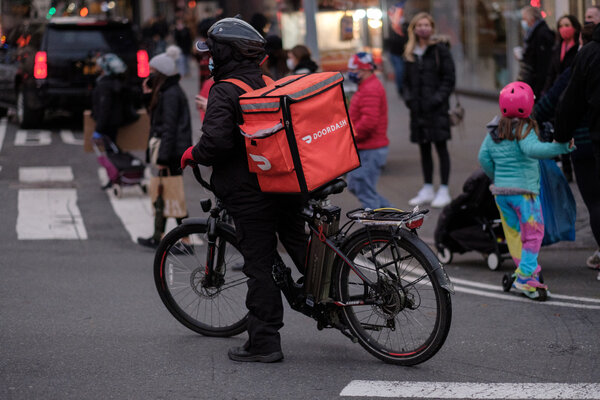 Shares of the food delivery service DoorDash soared 86 percent on the day they were first traded this month. The next day, Airbnb’s newly issued shares jumped 113 percent, giving the short-term home rental company a market valuation of more than $100 billion. Neither company is profitable. Brokers say strong demand from individual investors drove the surge of trading in Airbnb and DoorDash. Professional money managers largely stood aside, gawking at the prices smaller investors were willing to pay.

“It was beyond the realm of reasonable valuation,” said Doug Rivelli, president of the institutional brokerage firm Abel Noser in New York.

For companies that went public in December, shares on the first day of trading jumped roughly 87 percent, on average, as of the week that ended Dec. 18. That’s the highest since early 2000, when the tech bubble began to burst.

“It’s not as obvious a bubble as 20 years ago,” said Jay Ritter, a finance professor at the University of Florida who studies initial public offerings. “But we’re close to bubble territory.”

The market appears overheated by another gauge that investors often use to determine how cheap or expensive a stock is: its price relative to the profits it’s expected to make. Currently, the so-called price-to-earnings ratio for S&P 500 companies is above 22, and has been for much of the year. The last time the market was consistently above that level was in 2000.

The appetite of individual investors has been an unexpected byproduct of the pandemic. For many, trading stocks started as a way to indulge their speculative itch when other avenues, such as sports gambling, were effectively shuttered.

Tim Mulvena, a 32-year-old medical software salesman in Oneonta, N.Y., was one of them. He first logged on to Robinhood, a free-trading app popular with small investors, in March and started to buy stocks as the markets were collapsing.

“I have got to dabble and just see where this takes me,” Mr. Mulvena said.

He has notched gains of roughly 60 percent on Apple, his largest position. And his investment in Penn National Gaming, a regional gambling company that bought Barstool Sports, a digital sports site Mr. Mulvena was a fan of, has more than doubled.

Answers to Your Questions About the Stimulus Bill

Lawmakers agreed to a plan to issue stimulus payments of $600 and distribute a federal unemployment benefit of $300 for 11 weeks. You can find more about the bill and what’s in it for you here.