Home » Business » Pret A Manger Will Try Anything to Survive

The pandemic made the lunch chain’s biggest strength — hundreds of stores in central London — its biggest weakness overnight. 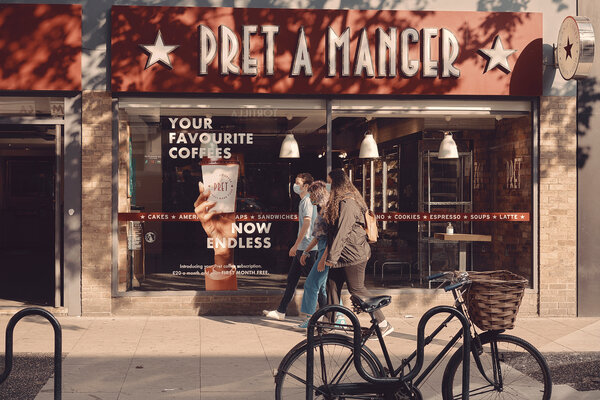 LONDON — If you stand outside the Bank underground station, in the heart of the financial center of Britain, and want to pick up a quick lunch, within about 10 minutes you can reach 25 Pret A Manger stores.

This “is the basis of how we built Pret,” said Pano Christou, chief executive of the chain, which was acquired by the food conglomerate JAB two years ago. It stretches to New York and Hong Kong, but its roots still run deep in London, home to more than 300 of its 533 stores worldwide. Over the years Pret (no one uses its full name, French for “ready to eat”) has seeped into Britain’s cultural life with traditions like its Christmas sandwich, part of an annual informal competition among the country’s lunch counters and supermarkets.

But in March, when the coronavirus emptied office buildings, Pret’s customers vanished. Seven months later, they have barely returned. And what was Pret’s greatest advantage — its central London stronghold — has suddenly become its biggest weakness.

The pandemic has turned back the clock on Pret’s accounts by a decade. In August, weekly sales in Britain were about 5.5 million pounds ($7.1 million), barely more than in August 2010, when it had about 150 fewer stores. It has laid off 2,890 people, a third of its staff. Thousands of those who remain have gone from 35-hour contracts to 28 hours a week.

Pret has become a symbol of the needy city center struggling without commuters, and its troubles spawned a flurry of newspaper articles about whether people should or shouldn’t “Save Pret.” Photos of high-ranking government officials popping in and out of a Pret near Parliament in July sent a clear message about which side of the argument the government was on before it instructed workers to return to their offices, albeit temporarily.

For some companies, the only response to the pandemic has been to hunker down and try to avoid running out of cash before their customers can return (consider the airline industry), but others cannot wait for a return to normalcy because it may never come. Pret is among the companies forced to reconsider their business as everyone reconsiders personal day-to-day routines. The predicament has forced a successful company to go into survival mode, to figure out what the office lunch is without the office.

And it is now clearly willing to try anything.

It wants to sell Pret food in supermarkets, and has already begun selling coffee beans on Amazon; it has signed up to all the major food delivery platforms to take its sandwiches, soups and salads to its work-from-home customers, and opened a so-called dark kitchen in North London to prepare its food strictly for delivery, modeled on the success of Sweetgreen and Shake Shack, and hopes to open another dark kitchen in either New York or New Jersey soon; and it is devising a special menu of hot evening meals for delivery, such as a Chipotle Chicken Burrito Bowl​.

Then there is the coffee subscription, an effort to drive people back to the stores: Five drinks a day made by a barista (coffees, teas and smoothies) for £20 a month. On the face of it, it could be an extraordinarily good deal. With two lattes a week, a subscriber will break even. And the first month is free. (Small print: You can’t order five drinks at once — there must be 30 minutes between each drink order.)