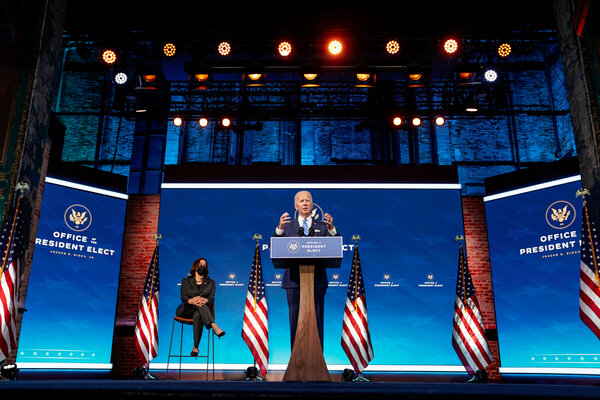 This time is different

President-elect Joe Biden unveiled his $1.9 trillion economic rescue plan yesterday, an ambitious package of bigger direct payments to Americans, extra funding for coronavirus vaccine distribution and more. The move is a bolder response than the Obama administration’s to the 2008 financial crisis — even if it runs up debt to dizzying levels.

What’s in the proposal:

$400 billion to combat the pandemic directly, including accelerating vaccine deployment and reopening most schools within 100 days of passage. (Today, Mr. Biden announced that Dr. David Kessler, a former F.D.A. chief who has co-chaired his coronavirus task force, would take over the Operation Warp Speed vaccine distribution initiative.)

$350 billion for state and local governments to bridge budget shortfalls.

The economy needs help. The Labor Department reported yesterday that 1.15 million Americans filed new unemployment claims in the first full week of the new year, the highest level since July. “There is real pain overwhelming the real economy,” Mr. Biden said, adding, “The very health of our nation is at stake.”

Mr. Biden is going big. The spending would come on top of the $2 trillion relief bill from March and the $900 billion relief program in December. By contrast, the centerpiece of the Obama administration’s response to the financial crisis clocked in at around $800 billion.

The package would be financed entirely with borrowing. Many economists have urged policymakers to set aside concerns about deficits, and Mr. Biden appears to be heeding those arguments. He acknowledged that his plan “does not come cheaply,” but argued that doing less “will cost us dearly.” Interest rates and inflation aren’t pressing concerns, some economists argue, so more aggressive measures to bolster the recovery could more quickly unlock the pent-up demand and savings built up during pandemic lockdowns.

This time around, Mr. Biden has won over groups like the U.S. Chamber of Commerce, which often opposed Obama-era economic initiatives. “We applaud the president-elect’s focus on vaccinations and on economic sectors and families that continue to suffer as the pandemic rages on,” the influential trade group said.

But passage through Congress isn’t assured. With Democrats set to control the House and the Senate, Mr. Biden is betting that he can overcome Republicans’ prior refusals to consider bigger economic plans. But Democrats’ control of the Senate is narrow, and Mr. Biden would have to offset any potential defectors with support from Republican moderates.

A bumper profit for America’s biggest bank. JPMorgan Chase kicked off Wall Street’s earnings season today with a record $12.1 billion profit in its latest quarter, up more than 40 percent from the year before. Nearly all of the firm’s business lines beat expectations, especially its investment banking and trading operations.

Don’t expect interest rate hikes any time soon, Jay Powell says. The Fed chair said that the central bank is prepared to raise rates “when the time comes,” but is unlikely to do so while the economy is still fragile, even if inflation rises this year.

Jim Simons steps down as chairman of Renaissance Technology. The hedge fund investor, who founded Renaissance in 1982, is handing the title to the firm’s C.E.O., Peter Brown. The pioneer in computer-driven investing suffered double-digit losses in funds open to outside investors last year.

BlackRock gets even bigger. The investment management giant now oversees nearly $8.7 trillion, it said yesterday when announcing a 19 percent jump in quarterly earnings. The results underline the power of the firm’s franchise as it uses its size to box out smaller rivals.

A new ‘blueprint’ for Fannie and Freddie

Fannie Mae and Freddie Mac, the government-sponsored mortgage finance firms, will not be privatized by the time the Biden administration takes over, as the Trump administration’s Federal Housing Finance Agency director, Mark Calabria, had intended. Instead, the Treasury Department announced that it will allow the enterprises — which are regulated by the F.H.F.A. — to retain more profits and build their capital reserves. This provides “a blueprint that we hope will help guide additional reforms,” the Treasury said, hinting at a path to privatization.

“There was too much difficult work left to do,” Jim Parrott of the Urban Institute told DealBook. “The Trump administration desperately wanted to get Fannie and Freddie back into the hands of private shareholders, but frankly ran out of time.” Mr. Calabria is intent on privatization, but it requires the agreement of the Treasury, which owns preferred shares of Fannie and Freddie after bailing them out in the 2008 subprime lending crisis. Rushing to release the groups from government control would have been risky and disruptive, said Mr. Parrot, a former senior adviser on housing issues in the Obama administration.

The changes are “modest” and nonbinding, basically accounting tweaks, said Mark Zandi, the chief economist of Moody’s Analytics. And they won’t dictate what the next Treasury secretary can do, which is a good thing in Mr. Zandi’s view. Quasi-governmental status has allowed Fannie and Freddie to be more flexible about extending credit, as well as foreclosure and eviction moratoriums, during the pandemic than if they were purely private. “It’s proof positive to me why a government corporation is the way to go,” Mr. Zandi told DealBook.

“There is a very vocal Miami faction, led by a few venture capital influencers, trying to tweet the city’s start-up world into existence.”

— The Times’s Nellie Bowles, who tracked more than two dozen tech execs who left San Francisco over the past year, decamping to Florida, Georgia, Texas and beyond.

Today, IBM announced a series of recommendations for government policy changes in the wake of the Jan. 6 violence at the Capitol. They include clearer guidance around presidential transitions, stricter rules on financial disclosures for office holders and more. The tech giant’s advocacy is noteworthy because these issues aren’t related directly to its business and they’re not backed by any corporate political donations, which IBM has forbidden for more than a century.

“What companies should be thinking about is policy reforms, not PAC checks,” Christopher Padilla, IBM’s vice president of government and regulatory affairs, wrote on the company’s blog. “Rather than just suspending PAC contributions as a signal-sending exercise, what makes more sense for us, since we don’t do political contributions, is to try to reform government in a way that will prevent some of this stuff from happening in the future,” he told DealBook.

Despite eschewing direct donations, IBM is an active lobbyist and hasn’t shied from hiring people with political ties, including most recently Gary Cohn, President Trump’s former economic adviser, as vice chairman. “IBM looks for people who bring experience and qualifications and doesn’t really look at what their political background is,” Mr. Padilla said.

Employees and shareholders expect companies to be “responsible players,” Mr. Padilla said, “and that’s what we’re trying to do.” IBM employees had pressed the company to speak out following the violence in the Capitol, much like they did after George Floyd’s killing last year. Following Mr. Floyd’s death, the company called for changes to police policy and said it would get out of the facial recognition business.

Treasury bends to a crypto protest

After an outcry from cryptocurrency supporters and their allies in Congress, the Treasury Department today will reopen the comment period for proposed digital money reporting rules that it says are intended to prevent money laundering. Its original comment period was 15 days, over the holidays, an unusually brief window that the Blockchain Association, a crypto trade group, would probably have challenged in court. “This does not resolve the matter, but it does pause the harm this rule would have caused had it gone into effect,” the association said.

Now, crypto backers have more time to weigh in, and a new person to lobby. They won another 15 days to comment on rules for certain “unhosted” digital wallet transactions, and 45 more days for proposed requirements on “hosted” wallet customers. So, Steven Mnuchin will no longer be running the Treasury Department by the time it considers the comments, which may please the crypto crowd.

When she chaired the Fed, Janet Yellen said existing money laundering rules were “adequate to meet enforcement needs,” in a speech about digital currencies in 2014. Now, she is the Biden administration’s nominee for Treasury secretary. Based on her record, she may be receptive to rethinking the proposed rule changes. The Blockchain Association’s executive director, Kristin Smith, told Fortune that Joe Biden’s win in November was “a good thing” for cryptocurrency.

Investors like BlackRock and Silver Lake are stuck with billion-dollar stakes in Ant Group that they can’t sell after Chinese regulators quashed the tech giant’s I.P.O. plans. (FT)

The activist investment firm Kimmeridge has become one of the top 10 investors in the energy company Ovinitiv, and plans to begin a proxy fight over its environmental record. (Kimmeridge)

Shares in the smartphone maker Xiaomi plunged after the Trump administration moved to bar Americans from investing in it over alleged ties to the Chinese military. (CNBC)

Trump White House staff members are getting the cold shoulder when looking for jobs in corporate America. (Business Insider)

TikTok will outlast the Trump administration. But how the Biden administration will treat it — and Chinese tech companies more broadly — is unclear. (NYT)

After suspending President Trump’s accounts, Facebook and Twitter are under pressure from human rights advocates to do the same to other public figures accused of fomenting violence. (NYT)

Microsoft, Oracle and Salesforce have joined a group that is developing tech standards for digital vaccination passports. (NYT)

Macaulay Culkin, the star of “Home Alone 2,” joined calls to have President Trump’s cameo edited out of the 1992 movie. (The Hill)

The story that has been making the rounds in Washington: “The $3,000-a-month toilet for the Ivanka Trump/Jared Kushner Secret Service detail” (WaPo)