The BBC’s weekly The Boss series profiles different business leaders from around the world. This week we speak to US hypnotist Grace Smith.

Grace Smith says she was able to give up alcohol, but that quitting smoking seemed impossible.

Back in 2011, the then 25-year-old had a stressful fundraising job in New York.

“I didn’t have any healthy coping mechanisms,” she says. “One of the ways that I was coping with all the stress and anxiety was through partying. 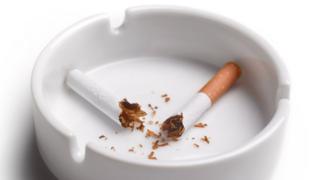 Grace realised that she had to get healthy, so she quit partying, and sobered up. But she just couldn’t shake her heavy smoking, despite trying gum and patches, and the dreaded “cold turkey”.

Eventually a friend suggested she tried hypnosis. “I was very sceptical,” says Grace. “I didn’t know if it was going to be swinging watches… or simply a hoax.”

She says that she was able to quit nicotine after just the one session. And the experience inspired her to become a hypnotherapist herself.

Today Grace runs her business Grace Space Hypnosis, which is said to offer online hypnotherapy sessions to more than 250,000 people around the world, including the bosses of Fortune 500 companies, athletes and celebrities.

The 34-year-old is also a regular on US television, and the author of two hypnosis books.

But what exactly is hypnotherapy? The Oxford English Dictionary defines hypnotism as “artificially producing a state in which the subject appears to be in a deep sleep, without any power of changing his mental or physical condition, except under the influence of some external suggestion or direction, to which he is involuntarily and unconsciously obedient”.

Grace calls it far more simply, “meditation with a goal”. Her clients use it to try to accomplish everything from losing weight, to quitting a habit, de-stressing, or achieving an ambition.

While some people still consider hypnotherapy to be a controversial practice, its use is supported by a great many medical organisations. For example, Cancer Research UK says that “some people with cancer use hypnotherapy to help them relax and cope with symptoms and treatment”.

Born and raised in New Jersey, Grace gained a combined degree in English, business management and religious studies from Wagner College in New York. She then enrolled on a masters in human rights studies at Columbia University.

To become a hypnotherapist back in 2011, she completed a 250-hour certification course while still working full time. This was the training required in the US, although it varies greatly from country to country.

After Grace finished the course she quit her fundraising job, and set herself up as a professional hypnotherapist from a “tiny” office in New York.

To attract her first clients she advertised an initial special offer price on online marketplace LivingSocial, which is today part of Groupon. She says she managed to sell 952 sessions in 24 hours, and more people then came thanks to positive word of mouth.

The initial sessions were face-to-face, but Grace then moved her business online, with sessions taking place over video link. She says the idea for this came from her corporate clients, who wanted to keep up their sessions while away on business.

Two years in her Brazilian husband, Bernardo Feitosa, joined the business to look after the technology side of things.

In recent years interest in Grace and her now Florida-based business has grown strongly, thanks in no small part to her presence on US TV. She has appeared on CBS’s daytime health chat show The Doctors, and Sony’s The Dr Oz Show.

Meanwhile, Jamie Hacker Hughes, a UK clinical psychologist, says that Grace and other such hypnotherapists “can be very effective in helping patients to manage a wide range of presentations”, when used “as an adjunct to therapy used in psychology, medicine and dentistry”.

The Grace Space Hypnotherapy School has now trained more than 200 people. Combined with Grace’s main company, which has 20 contractors, she is expecting annual revenues of $3m (£2.4m) this year.

During the Covid-19 pandemic it offered free sessions to frontline medical staff worldwide.

“It is still widely misunderstood,” she says, unhappy that some people still think of it as “mind control… which couldn’t be further from the truth”.

“When you know what a positive impact you’re making in the world… to have someone belittle your work in such a flippant way is painful and frustrating,” says the mother of two.