Home » Business » These Days, Even a Michelin Star Chef Has to Sell Takeout

Many restaurants had been planning for a future in which delivery made up a sizable share of their business. They just didn’t expect that moment to arrive right now.

The Mexicue chain, which relied on dine-in customers for 80 percent of its business, is now surviving on deliveries.Credit…Gabby Jones for The New York Times

For nearly three years, the chef T.J. Steele refused to offer delivery at Claro, his Michelin star restaurant in the Gowanus neighborhood of Brooklyn.

He ignored the constant entreaties from online delivery companies like Grubhub and DoorDash, which were sometimes sent to his personal email address. Creating a delivery operation would have required a time-consuming overhaul of the menu. It just wasn’t worth the effort.

But because of the coronavirus, Mr. Steele has had to make some compromises to stay in business. He has signed up with Grubhub and Caviar, another delivery service. He has created a menu that eschews complex, hard-to-deliver items like tuna tostada in favor of homey offerings like chicken — a food he never thought he would serve. (He has always preferred turkey.)

Mr. Steele has also had to get used to seeing delivery drivers mishandle his carefully assembled dishes. And he has learned to package certain orders in foil containers so the dishes do not have to be removed from their delivery vessels to be heated in the oven.

“Before, we were a Michelin star restaurant where people would have a bunch of mezcals and hang out for a while and spend money,” Mr. Steele said. “Now we’re sending chips and salsa and soup to people.”

Before the coronavirus made delivery a necessity, restaurants across the country — from mom-and-pops to major chains like McDonald’s — were slowly beginning to reinvent themselves as logistics operations, using software to track orders on different delivery platforms or experimenting with containers and menu items designed to travel. 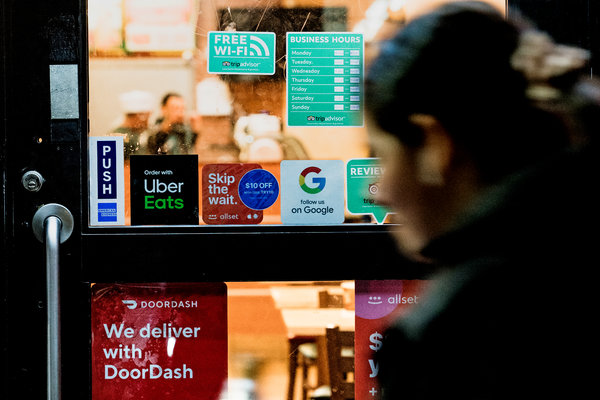 Now, what began as a steady evolution is taking place at warp speed, as even chefs and owners who had long resisted delivery, like Mr. Steele, adapt to the pandemic.

One day this month, Grubhub added more than four times as many restaurants to its app as it had on its previous record day. Demand has also spiked for Ordermark, a company in Los Angeles that provides hardware to help restaurants manage delivery orders. Last year, an average of roughly 300 restaurants signed up in a month. In March, more than 1,000 have joined.

“Oftentimes, the restaurants weren’t set up for delivery — they don’t really have menus that are designed for takeout or delivery,” said Alex Canter, the chief executive of Ordermark. “They’re having to quickly make adjustments. And for those restaurants, it’s a life-or-death situation.”