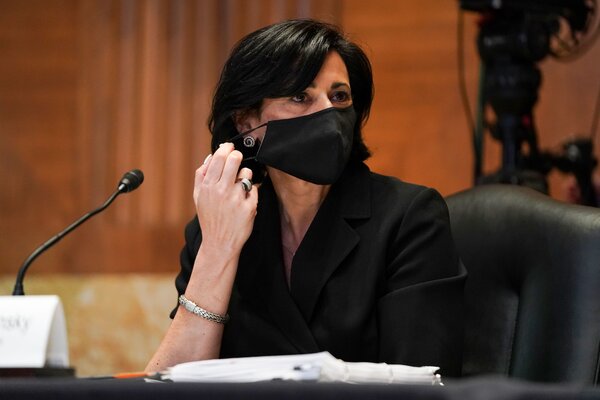 Two months after the C.D.C. said it was OK for vaccinated people to forgo masks indoors, the agency reversed course yesterday, saying that they should put them on again — at least in areas where the coronavirus infection rate is high.

The official guidance — swayed by research on the Delta variant, which is causing rising case counts and “breakthrough” infections of vaccinated people — is aimed at places where the virus is surging. “This new science is worrisome and unfortunately warrants an update to our recommendation,” said Dr. Rochelle Walensky, the C.D.C.’s director.

The agency’s new criteria apply to nearly two-thirds of U.S. counties, many concentrated in the South. Per the guidance, all residents of Florida, vaccinated or not, should wear masks indoors.

The announcement complicates return-to-office plans — again. Many companies that brought workers back to offices allowed fully vaccinated employees to go without masks, an important incentive for workers as well as a signal that the pandemic was winding down.

When the C.D.C. lifted its masking guidance in May, Alana Ackels, a labor lawyer at Bell Nunnally, said her phone “was ringing off the hook because everyone wanted to get rid of the mask.” Yesterday evening, after the agency’s reversal, “I haven’t gotten a single call about it,” she said, adding, “People are enjoying their freedom, so I don’t know if we’re going to go back or not.”

Companies in areas not affected by the guidance may need to rethink plans, too. And businesses with national footprints might decide they should be consistent across their offices. In New York, the new mask guidance doesn’t apply and finance firms have already begun to call back workers. Goldman Sachs and JPMorgan Chase, which allow fully vaccinated employees to go mask-free, had no comment about the C.D.C.’s announcement.

The move may spur more corporate vaccine mandates, said David Schwartz, who runs the labor group at the law firm Skadden, Arps, Slate, Meagher & Flom, noting that it might be a preferable alternative to “requiring employees and customers to wear masks and not being able to maintain a consistent policy.” The Washington Post yesterday joined a short, but growing, list of private employers requiring vaccination as a condition of employment.

Government officials have been imposing vaccine mandates at the state, local and federal levels recently, and encouraging private companies to follow suit. President Biden is weighing a vaccine mandate for all two million federal employees, and is expected to deliver a speech tomorrow about it.

Read more: “Will the Delta Variant Wreck the Recovery?”

The Fed wraps its rate-setting meeting with inflation concerns in the air. The central bank is expected to leave its policy unchanged, but its chair, Jay Powell, is sure to face questions about whether rising inflation and a growing economy will require a change in approach sometime soon.

Simone Biles prioritizes her mental health. The star gymnast dropped out of the team and individual all-around competitions at the Olympics, saying, “​​I am not in the right head space.” The move raises more questions about whether the pressure imposed on athletes by the sports and sponsorship complex is too much to bear. Biles’s departure is also a blow for broadcasters, who may struggle to deliver promised viewer numbers to advertisers.

The airline industry asks regulators to help with fuel shortages. Shortages at smaller airports, mainly in the West, are related to the post-pandemic travel boom, a shortage of truck drivers and a demand for jet fuel for planes used to fight wildfires.

European banks report bumper profits. Following their American counterparts’ lead last week, Barclays, Deutsche Bank and Santander all beat analyst expectations for their latest earnings today. In less positive news, Credit Suisse is preparing to publish a report about its role in the collapse of Archegos, which saddled the Swiss bank with huge losses.

Another group sues Johnson & Johnson for deceptive marketing practices. The National Council of Negro Women filed a complaint yesterday arguing that J&J targeted Black women with promotions for baby powder, despite internal concerns that talc in the product might cause cancer. In response to the lawsuit, one of many related to the talc-based baby powder, the company reiterated that its products were safe.

The tech giants continue to have a good pandemic, financially speaking, with another round of blowout quarterly earnings. Here’s a rundown of the three companies that, combined, reported $57 billion in second-quarter profits yesterday:

Alphabet announced a record profit of $18.5 billion for the quarter, up 62 percent on the previous year and more than it earned in all of 2015. Sundar Pichai credited “a rising tide of online activity” for the results, which attracted advertisers to spend big on the company’s platforms. (YouTube’s ad revenue was up more than 80 percent versus last year.)

Apple reported a 93 percent increase in profit, to $21.7 billion, in its latest quarter. People bought even more of its devices than usual during the pandemic: IPhone sales increased by double-digit percentages for the third quarter in a row. Tim Cook said he perceived a “growing sense of optimism by consumers.”

Microsoft had its most profitable quarter ever, making $16.5 billion in the three months to June, a rise of 47 percent. Sales of its flagship cloud-computing product, Azure, rose by 51 percent, and Satya Nadella said use of the software giant’s collaboration products “has never been higher.”

“Unlike anywhere else, we are able to control our environment, which eliminates the risks of a big outbreak.”

— Richard Fain, the C.E.O. of Royal Caribbean Cruises, on how the cruise industry has learned lessons in managing during the pandemic. The cruise liner said that all sailings from Florida in July and August were fully booked, as the industry prepares its comeback.

Working from home is still a rich-people thing

Despite lockdown orders last year that closed corporate offices, employed Americans still spent more time at their workplaces than doing their jobs from home, according to the American Time Use Survey, which asks thousands of people to track how they spend every minute of every day. About one in three Americans worked primarily from home last year, compared with one in seven in 2019.

People with higher incomes and advanced degrees were most likely to work from home, as they were before the pandemic. While 65 percent of people in the top quartile of income worked from home on the average day last year, only 17 percent in the bottom quartile did the same. That’s worth keeping in mind during the debates about when and how to reopen offices: For most of the country’s workers, returning to the workplace isn’t an option — because they never left.

This group of video gamers is worth $250 million

Evil Geniuses, one of the first professional e-sports teams, will announce today that China’s Fosun Sports Group is taking a minority stake in the business, valuing the squad of elite video gamers at more than $250 million. The team, which was founded in 1999, well before e-sports became a billion-dollar industry, is also partnering with the English Premier League soccer club Wolverhampton Wanderers. That venture is aimed at tapping Asian markets, where the “Wolves” have training facilities, as well as at cross-promoting the teams to each other’s fan bases.

DealBook spoke with Nicole LaPointe Jameson, who took over as C.E.O. of Evil Geniuses two years ago after its sale to the private equity firm Peak6. That deal came three years after Evil Genius’s players bought back the company from Amazon’s Twitch, leaving it rudderless and struggling in competitions. LaPointe Jameson, 27, has also had to navigate the sometimes toxic culture of video gaming, including claims of harassment and racism by players on the team she runs.

On turning around a wayward company …

“Two years ago, we were worth nothing close” to the company’s current valuation, said LaPointe Jameson, who is the first Black C.E.O. of a major e-sports team. When she arrived, the company “had to make decisions at the $5 level very carefully,” she said.

Since she took over, Evil Geniuses has expanded into more games, notably League of Legends, and has hired a more diverse set of influencers to attract attention to its players (and sell merchandise and sponsorships).

“When I came into the e-sports space, I was unexpected in many different ways,” she said, noting her private equity background, where she specialized in turning around distressed businesses. “I kind of came out of Mars for them.”

On addressing a broken culture …

“I won’t shy away from the negative reputation” of gaming, LaPointe Jameson said, describing tackling reports of harassment by players as well as financial troubles as “trial by fire.” The company’s “robust curriculum” about antibullying should help reduce the stigma that turns some off from the industry, she said. “We are happy to tackle that,” she added, “but it is a bit against the grain because that is not the easiest path to proceed as a company.”

LaPointe Jameson has focused on recruiting and now has a leadership team of more than half women, and she has introduced benefits like parental leave. “It was important for me to make sure those types of ‘unsexy back-end components’ were brought in,” she said, so people “who had never heard of e-sports would consider coming here.”

After BuzzFeed’s SPAC deal, what’s next for Vice and Vox? (NYT)

The owner of Greyhound is still trying to sell the iconic bus line after the pandemic interrupted those plans. (Bloomberg)

Big Pharma is playing up its role in fighting the pandemic as it prepares to push back against corporate tax hikes. (WSJ)

Americans want to borrow again, but some are finding themselves cut off by lenders. (NYT)

The pandemic boom for companies that make masks and ship packages is wearing off. (WSJ)

The finance firm Aquiline Capital has reportedly told all of its employees to take the week off, making it easier for them to fully relax. (Reuters)

We’d like your feedback. Please email thoughts and suggestions to [email protected]