Furloughs by Macy’s and Gap will affect the majority of their work forces, and show how the pandemic will devastate many retailers. 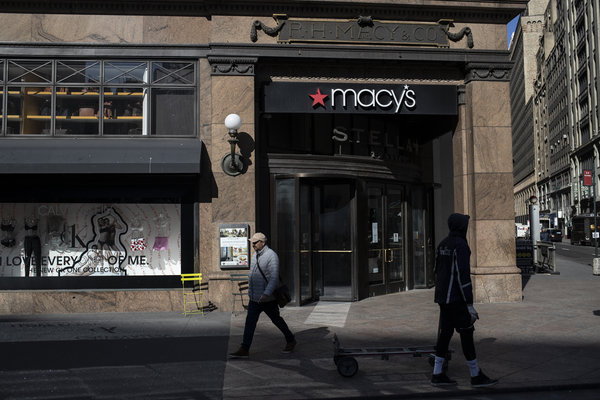 By Sapna Maheshwari and Michael Corkery

Macy’s and Gap said on Monday that they planned to furlough much of their work forces, a stark sign of how devastating the coronavirus will be for major retailers and their workers who sell clothing, accessories and other discretionary goods.

Macy’s, which said the cuts would affect the “majority” of its 125,000 workers, lost most of its sales after the pandemic forced it to close stores. Gap, which also owns Old Navy and Banana Republic, said it would furlough nearly 80,000 store employees in the United States and Canada. The announcements followed similar actions by other name-brand chains with products considered nonessential.

When a national emergency was declared earlier this month, a number of retailers announced stores would close but vowed to keep offering pay and benefits to employees for at least two weeks. As the odds of reopening stores quickly became increasingly unlikely, many extended workers’ pay into April.

But now, it appears the money is drying up. A large part of the retail industry that is not involved in selling groceries, toilet paper or disinfectant simply has very little cash coming in.

L Brands, which owns Victoria’s Secret and Bath & Body Works, said it would furlough most store staff and “those who are not currently working to support the online businesses or who cannot work from home” starting April 5. Nordstrom said last week that it would furlough “a portion of corporate employees” on April 5 for six weeks. Buzzy start-ups are also under pressure: Rent the Runway laid off its retail employees through a call via Zoom on Friday, while Everlane laid off or furloughed nearly 300 of its workers.

The number of workers affected is significant. L Brands has 94,400 employees, according to the company’s most recent annual filing. Ascena Retail, which owns Ann Taylor and Lane Bryant, said on Monday that it was furloughing all its store employees and half its corporate workers, which amounts to about 90 percent of the company’s 43,000 employees.