NEW YORK (Reuters) – Wall Street surged on Friday after a strikingly upbeat May jobs report unexpectedly provided the clearest evidence yet that the U.S. economy is headed for a quicker-than-anticipated recovery. 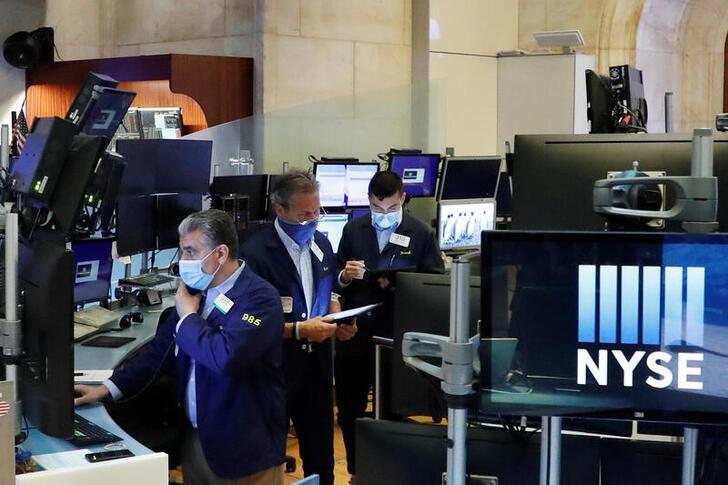 The Nasdaq breached its all-time closing high reached in February but pared its gains to end the session a hair’s breadth below it. All three major U.S. stock indexes advanced 2% or more.

The U.S. economy added a remarkable 2.5 million jobs last month, rebounding from April’s record 20.7 million drop and pushing the unemployment rate down to 13.3%. Analysts saw unemployment soaring to a historic 19.8%.

“The numbers are a huge surprise to the upside,” said Michael Arone, chief investment strategist at State Street Global Advisors in Boston.

U.S. Treasury yields rose on the jobs data, giving a boost to interest rate-sensitive banks and sending the S&P 500 Banks index up 4.9%.

Airlines, among the hardest hit by the coronavirus crisis, soared, with the ARCA Airlines index jumping 5.7%.

But the World Health Organization warned that the COVID-19 pandemic, which brought the global economy to its knees in the wake of mandated shutdowns, is far from over and new cases are on the rise.

Market participants now turn their focus to the U.S. Federal Reserve, which holds a monetary policy meeting next week where the latest jobs data will almost certainly be discussed.

All 11 major sectors of the S&P 500 ended the session well in the black, with energy, financials and industrials leading the gainers in a continuation of a rotation into cyclicals, which were beaten up amid economic lockdowns.

Small caps and transportation stocks also outperformed, with the Russell 2000 and Dow Transportation up 3.8% and 3.1%, respectively.

Boeing Co surged 11.5%, giving biggest the blue-chip Dow its biggest boost, on hopes of a pickup in air travel a day after American Airlines Group Inc and United Airlines said they would boost their U.S. flight schedule next month.

Drugmaker Novavax Inc advanced 3.7% following its announcement that the U.S. Department of Defense would give it up to $60 million to manufacture its COVID-19 vaccine candidate.

Advancing issues outnumbered declining ones on the NYSE by a 5.03-to-1 ratio; on Nasdaq, a 3.08-to-1 ratio favored advancers.

Volume on U.S. exchanges was 17.56 billion shares, compared with the 12.03 billion average over the last 20 trading days.