Home » Business » What Jeff Bezos Does Next

On Feb. 22-23, DealBook will convene some of the sharpest minds in business and policy for our DealBook DC Policy Project. Join us from anywhere in the world, free of charge. Register today.

A new title at Amazon

Jeff Bezos made waves yesterday when he announced plans to step down as Amazon’s C.E.O. later this year, naming a top lieutenant, Andy Jassy, as his successor. Mr. Bezos will still exert a lot of influence as executive chairman of the e-commerce giant he founded, making the shift symbolically important but perhaps not a major practical change.

“As much as I still tap dance into the office, I’m excited about this transition,” Mr. Bezos wrote in an email to employees. He noted that Amazon is riding high — it is a powerhouse in online shopping, cloud computing, streaming and just about any other market it enters — making this a good time to step back. He plans to focus on “important Amazon initiatives” in addition to projects like Blue Origin, his rocket company, and The Washington Post. Mr. Bezos, who is worth some $200 billion, may also dive more deeply into philanthropy, like another tech founder, Bill Gates, who switched from C.E.O. to chairman in 2000, the year he formed the Bill & Melinda Gates Foundation.

The announcement came on the day that Amazon announced another set of blockbuster financial results: Its fourth-quarter earnings more than doubled from the same time a year ago, to around $7 billion, on more than $100 billion in sales. Any chart that spans Mr. Bezos’s tenure at Amazon is eye-popping, as he turned a small, loss-making online book retailer into “the everything store” with a market cap of $1.7 trillion. Here’s one:

Mr. Bezos still has power over Amazon. Executive chairmen are often seen as company leaders even after dropping the C.E.O. title: Think of Rupert Murdoch at Fox, Bob Iger at Disney or Larry Ellison at Oracle. Mr. Bezos also owns 10 percent of the company. And he had already delegated many day-to-day responsibilities.

In Mr. Bezos’s words: “I’ve never had more energy, and this isn’t about retiring.”

In the words of Amazon’s C.F.O., Brian Olsavsky: “Jeff is really not going anywhere.”

Meet the not-so-new guy. Mr. Jassy is a longtime Amazon executive — he leads the cloud-computing unit, which generates more than half of overall operating profits. He had long been seen as Mr. Bezos’s heir apparent, having “shadowed” him in the early 2000s. Former employees told Insider that Mr. Jassy focuses on details, and those who make mistakes in presentations “won’t get a second shot, at least not for a long time.”

The change comes as Amazon faces pressure on new fronts. Rivals like Walmart are building e-commerce operations. Warehouse employees are protesting working conditions, sometimes by trying to unionize. And lawmakers and regulators around the world are increasingly worried about Amazon’s market dominance. Earlier yesterday, Amazon paid $62 million — about 18 hours’ profit — to settle an investigation by the F.T.C. about delivery drivers’ tips.

Mr. Jassy may need to spend more time than his boss in the other Washington: “I have some questions for Mr. Jassy,” tweeted Representative Ken Buck, a Republican member of the House Judiciary Committee, after news of his promotion at the Seattle-based company.

Democrats begin a push to pass their stimulus package. In the Senate, Democrats voted to start the process of budget reconciliation, which would let them approve President Biden’s $1.9 trillion proposal without Republican support.

Ant Group reaches a deal for increased scrutiny. The Chinese fintech giant will reportedly become a financial holding company and submit to higher capital requirements as part of an agreement with regulators in Beijing, Bloomberg News reports.

The U.S. reimposes tariffs on aluminum from the U.A.E. The decision reverses a last-minute concession by the Trump administration, and suggests that Mr. Biden may not entirely back away from protectionism.

Alphabet reports a record quarter. The parent company of Google collected $57 billion in revenue in the fourth quarter, up 32 percent from the same time a year ago, as its search and YouTube businesses thrived. Its cloud unit lost $1.2 billion.

A bad day for Elon Musk. Tesla recalled 135,000 vehicles over faulty touchscreens, one of the electric carmaker’s biggest safety incidents. And the test flight of SpaceX’s next-generation rocket ended in flames.

The meme-stock rally goes off the rails

Shares in GameStop, AMC and other stocks at the heart of a Reddit-fueled trading frenzy have plunged for two days, presenting those who piled in with a difficult question: Is it time to quit?

Shares in GameStop are down 81 percent from their peak last week, vaporizing $27 billion in market cap. Dave Portnoy, the Barstool Sports founder and icon among day traders, admitted on Twitter that he had lost around $700,000 on meme-stock bets. (Not everyone’s losing: A prominent Reddit user who has promoted the GameStop trade for more than a year is still up $7.5 million, and firms that execute trades for online brokerages also profited.) What changed?

One explanation is that hedge funds have abandoned their bets against these stocks, eliminating one source of demand — their need to cover the bets.

Another popular target for blame: Robinhood and its co-founder and C.E.O., Vlad Tenev, after the company limited the buying of meme stocks because of daunting collateral demands from its clearing partners.

There’s pressure to keep the trade going. “If you can afford to hold the stock, you hold,” the billionaire investor Mark Cuban urged the WallStreetBets forum on Reddit. Posters on the message board exhorted each other to stay strong — have “diamond hands,” in their lingo — in hopes of a rebound. Mr. Cuban, among others, argued that shares would rise again once brokerages lifted trading limits.

Some traders said they saw themselves in a crusade against Wall Street, no matter the cost: “If my entire position in GameStop went to zero, I’d be OK with it,” a law student told The Times.

Regulators are weighing their response. Treasury Secretary Janet Yellen will convene officials from the S.E.C., the Commodity Futures Trading Commission and the Fed this week to discuss the recent market volatility and a review of the role of trade-execution firms like Citadel Securities.

Mr. Tenev of Robinhood had another suggestion: eliminating the two-day delay between executing a stock trade and settling it. That period requires brokerages to post collateral to back customers’ trades, and was a factor in Robinhood needing to raise $3.4 billion last week. Left unsaid: Would same-day settlement be that much easier during a frenzy?

— The Times’s Clifford Krauss on Exxon, BP and other major oil companies’ worst results in years (or even decades) as they struggle with a future dominated by cleaner energy.

Can Uber deliver everything?

Uber has acquired Drizly, the alcohol delivery service, for $1.1 billion. The stock-and-cash deal adds another brand to Uber’s delivery business, alongside Postmates for food, Cornershop for groceries and a partnership with Nimble for prescriptions.

Delivery has boomed during the pandemic, making up for the fall in ride hailing. Uber and its rivals around the world have been pushing aggressively into the business, making a bet that they will be able to deliver everything, even after Covid-19 recedes.

“The ‘deliver anything’ thesis is much harder than it sounds,” Shira Ovide, who writes our sister newsletter On Tech, told DealBook. Even if the same person is paying, moving food from a restaurant to an apartment is different from moving a person from an apartment to the airport. “Then imagine the same thing, in every industry,” she added.

Here are some intriguing possibilities, courtesy of Shira: Instead of Amazon replacing local stores, these courier services could keep businesses alive by helping them offer delivery. Or, the complexity of the “deliver anything” model may never prove viable, leaving drivers in the lurch.

Shira has more smart analysis about this in the works for the On Tech newsletter. 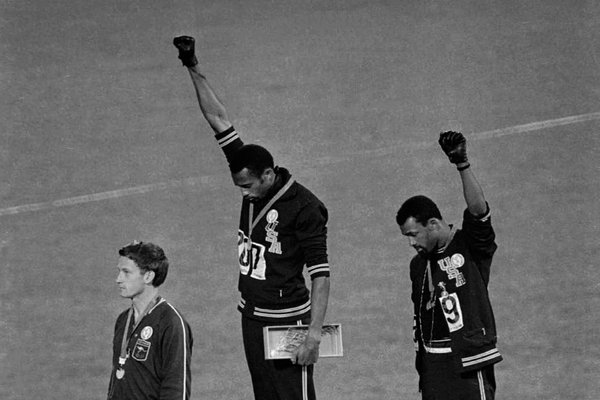 Athletes push to allow social protests at the Olympics

At the Olympics, athletes are forbidden from expressing “political, religious or racial propaganda,” as the charter puts it, at the Games’ venues. This rule was most famously challenged at the 1968 Olympics in Mexico City, by the American sprinters Tommie Smith and John Carlos, who were punished for raising their fists on the medal podium. More recently, though, sports and social justice have become deeply linked. So should the rule change?

Social justice gestures are a routine part of sports now. The N.B.A. and W.N.B.A. painted “Black Lives Matter” on their courts. Every match in the English Premier League begins with players kneeling. Even the N.F.L., long a holdout in allowing politics on the field, has softened its stance.

Players’ gestures are embraced and amplified by corporate sponsors, some of which are also involved with the Olympics, like Airbnb and Coca-Cola.

The International Olympic Committee is reviewing its policy. It gave athletes and national federations an update on the process earlier this week, DealBook has heard. It noted that an independent agency is analyzing a survey of more than 3,500 athletes, and will give a recommendation by the end of April. For its part, the U.S. Olympic and Paralympic Committee said in December that it would no longer punish athletes who peacefully protested at the Games.

The dating app Bumble is seeking to raise up to $1 billion in its I.P.O., at a $6.5 billion valuation. (Bloomberg)

In consumer M.&A. news: Kraft Heinz is reportedly in talks to sell the Planters brand to Hormel for $3 billion, while Nestlé is said to be near a deal to sell Poland Spring bottled water to One Rock Capital for more than $4 billion. (WSJ, Reuters)

Joe Kaeser of Siemens praised activist investors for trying to break up Germany’s many conglomerates, an unusual opinion for a German corporate chief. (FT)

Mario Draghi, the former president of the European Central Bank, was asked to break a political deadlock in Italy by becoming prime minister. (NYT)

Elizabeth Warren, a frequent critic of Wall Street, was appointed to the Senate Finance Committee. One of her first priorities will be a wealth tax. (Roll Call)

Alibaba said it was reviewing its businesses in response to an antitrust crackdown, another effort to appease regulators in Beijing. (WSJ)

Chinese hackers are suspected of using a software exploit developed in Russia to break into U.S. government networks. (Reuters)

Hoping for a pandemic getaway to St. Barts? Think again: A Covid-19 travel ban is coming in. (NY Post)

Almost everyone is working longer during the pandemic. (Bloomberg)