Home » Business » What to Expect from Gary Gensler’s Testimony 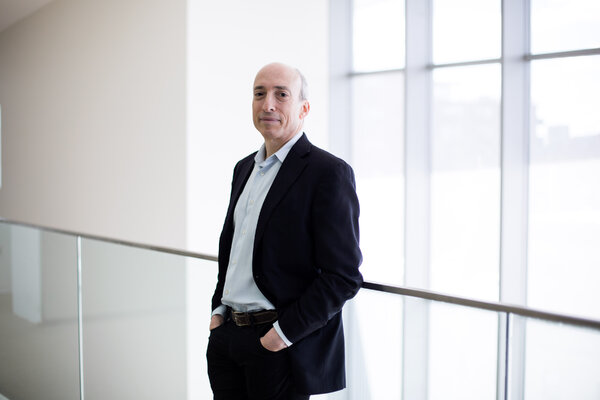 The S.E.C. chair Gary Gensler will testify before the Senate Banking Committee today, after five months on the job. Since his confirmation, his public statements have generated much debate, many headlines and more than a few market movements. This morning, based on his prepared remarks, he’ll make the case for additional resources to achieve a more expansive agenda than many of his predecessors at the commission.

Here’s what to expect on some hot-button issues:

Gensler wants to “freshen up” the rules. To promote efficiency and competition, he’s considering structural issues, like whether there is too much concentration among market makers, and conflicts of interest, like those arising from payment for order flow. Speeding up transaction settlements, which now take about two business days, is also a goal Gensler notes in his remarks, and one that Republican senators want him to pursue, a committee aide said.

When it comes to crypto, buyers beware. Gensler will say that the new digital currency markets resemble a time before securities laws: He wants more investor protection in crypto finance, issuance, trading and lending. Senator Elizabeth Warren, Democrat of Massachusetts, who has been outspoken about regulatory gaps in the crypto industry, will follow up on those concerns, an aide said. Senator Cynthia Lummis, Republican of Wyoming, will also press Gensler for regulation, but with an emphasis that reflects her support of the crypto industry. “We must have a balanced legal framework for digital assets that enables innovation and protects consumers,” she told DealBook in a statement.

More required disclosures on climate risk, human capital and cybersecurity are in the works. Perhaps sensing the resistance he’ll face on this issue, Gensler will note that “these proposals will be informed by economic analysis and will be put out to public comment, so that we can have robust public discussion.” Ranking committee member Patrick Toomey of Pennsylvania has pushed back on added disclosures on environmental, social and governance issues before, and he’ll likely renew these criticisms at the hearing.

Other priorities include greater transparency on SPACs, China and insider info. The surge in special purpose acquisition companies that allow businesses to go public with fewer rules than traditional I.P.O.s is cause for concern, Gensler will say, due to conflicts of interest he believes are “inherent” in the structures. He also wants the risks of Chinese companies that list on U.S. exchanges to be made more apparent. And Gensler will discuss efforts to “modernize” a rule known as 10b5-1 on executive stock sales, which helps insulate insiders from accusations of trading on nonpublic information.

It’s a lot. At the hearing, Gensler will get guidance from senators on what they think his priorities should be. How far he can advance his plans could depend, in part, on whether lawmakers give him more authority and resources. Like Gensler, committee chair Sherrod Brown of Ohio is keen on added transparency and stricter investor protections. Brown will open the hearing by saying that “the disconnect between the stock market and most Americans’ lives has never been more painfully clear,” and that, whatever the economic circumstances, “the hedge funds, the SPAC sponsors, the big banks, the brokers — the big guys seem to do just fine.”

Inflation may finally be slowing. Economists expect government data released today to show that prices rose last month at their slowest pace since February. However, a survey yesterday showed that consumer expectations for inflation are higher than they have been in more than seven years.

Apple issues an emergency patch to fix a flaw that gave hackers “zero-click” access to devices. The nonprofit watchdog Citizen Lab identified the flaw, which can be fixed by following these steps. It had been exploited by an Israeli spyware firm and signaled a serious escalation in the cybersecurity arms race.

Intuit is buying Mailchimp for about $12 billion. The deal is Intuit’s largest to date and a notable expansion for a company largely known for its finance software. Intuit wants to combine the email marketing services offered by Mailchimp with QuickBooks to help small businesses manage their customers as well as their accounts.

President Biden makes more nominations at key agencies. Alvaro Bedoya, a privacy expert and Big Tech critic, is the president’s nominee for a seat at the F.T.C., and Rostin Behnam, the acting chair of the C.F.T.C., who has backed efforts to mitigate climate risk, was nominated to lead the agency permanently. Meanwhile, the two men behind the Dodd-Frank act, which tightened financial regulation after the 2008 crisis, urged the renomination of Fed chairman Jay Powell, whose term expires in February.

Is uranium the new GameStop? The price of the radioactive metal has risen nearly 40 percent in the past month, with users of the influential Reddit investment board WallStreetBets talking up the shares of uranium mining companies. The switch to greener technologies could lift demand for the fuel for nuclear reactors, but some worry a new exchange-traded fund is inflating another market bubble.

Walmart gets pulled into a crypto hoax

Yesterday, a phony news release purporting to come from the retail giant Walmart announced a partnership with the digital currency Litecoin. This briefly drove up crypto prices and showed how vulnerable markets are to fake news in the social media age. The hoax is likely to bolster calls for greater regulation of the cryptocurrency industry, in which trading on largely unregulated markets can be susceptible to misinformation.

What happened: The market-moving event began with a release published on GlobeNewswire that revealed signs of inauthenticity upon close inspection but duped several news outlets, including Reuters and Bloomberg, which published articles based on it.

Litecoin quickly shot up in value, gaining 30 percent in a matter of minutes. Walmart refuted the release after it heard from reporters trying to confirm the announcement. Litecoin gave back most of its gains within an hour of the release, making the episode look like a classic pump-and-dump scheme, with a crypto twist.

Adding fuel to the initial news reports, the Litecoin Foundation retweeted the release on its official Twitter account before deleting it, saying that the retweet was a mistake by a social media manager. GlobeNewswire said the “illegitimate press release” was submitted by a “fraudulent user account” and that it was adding “enhanced authentication steps to prevent this isolated incident from occurring in the future.”

Securities lawyers predict an S.E.C. investigation and possible charges against the fraudsters, whose identity is unknown. “It is a misrepresentation involving a public issuer,” said Andrew Calamari, a lawyer with Finn Dixon & Herling, formerly at the S.E.C. “There is no question the S.E.C. has jurisdiction.”

A.O.C. spells out a message

Representative Alexandria Ocasio-Cortez of New York attended the Met Gala last night, a $300,000-a-table occasion packed with celebrities and fashion’s biggest names. In her first appearance at the event, the progressive Democrat wore a dress emblazoned with a clear message: “Tax the Rich.”

A Rise in Anti-Asian Attacks

A torrent of hate and violence against people of Asian descent around the United States began last spring, in the early days of the coronavirus pandemic.