Home » Business » What Will Chinese Fashion Publishing Look Like in 2021?

LONDON — A round of changes at Condé Nast last year, which included the exit of Vogue China’s founding editor Angelica Cheung, Condé Nast China president Sophia Liao and group publisher Paco Tang, has had profound impact on how the Chinese fashion media landscape will look in 2021 and beyond.

It is the first time in 16 years that someone else besides Cheung, who was generally regarded as the most powerful person in the Chinese fashion industry, will take the lead in the fast-changing Chinese fashion publishing market, where brands are gearing up to allocate a big chunk of advertising spend this year.

There are rumors floating about Cheung potentially joining LVMH China or launching her own label. And sources told WWD that Anna Wintour, who was promoted to chief content officer at the company in December, has been interviewing editor in chief-type candidates in Singapore, Hong Kong and Taiwan for Cheung’s replacement.

Many in mainland China see this as a worrying sign that the new editorial director of Vogue China, who will be reporting to Wintour, may not be able to keep up with the pace and direction China’s publishing sector is heading.

In recent years, China has moved away from Hollywood, K-Pop or even the Western fashion system, and has created a unique ecosystem that caters to Chinese consumers’ increasing demand for local celebrities and a resurgence of Chinese aesthetic that reflects their own identity. 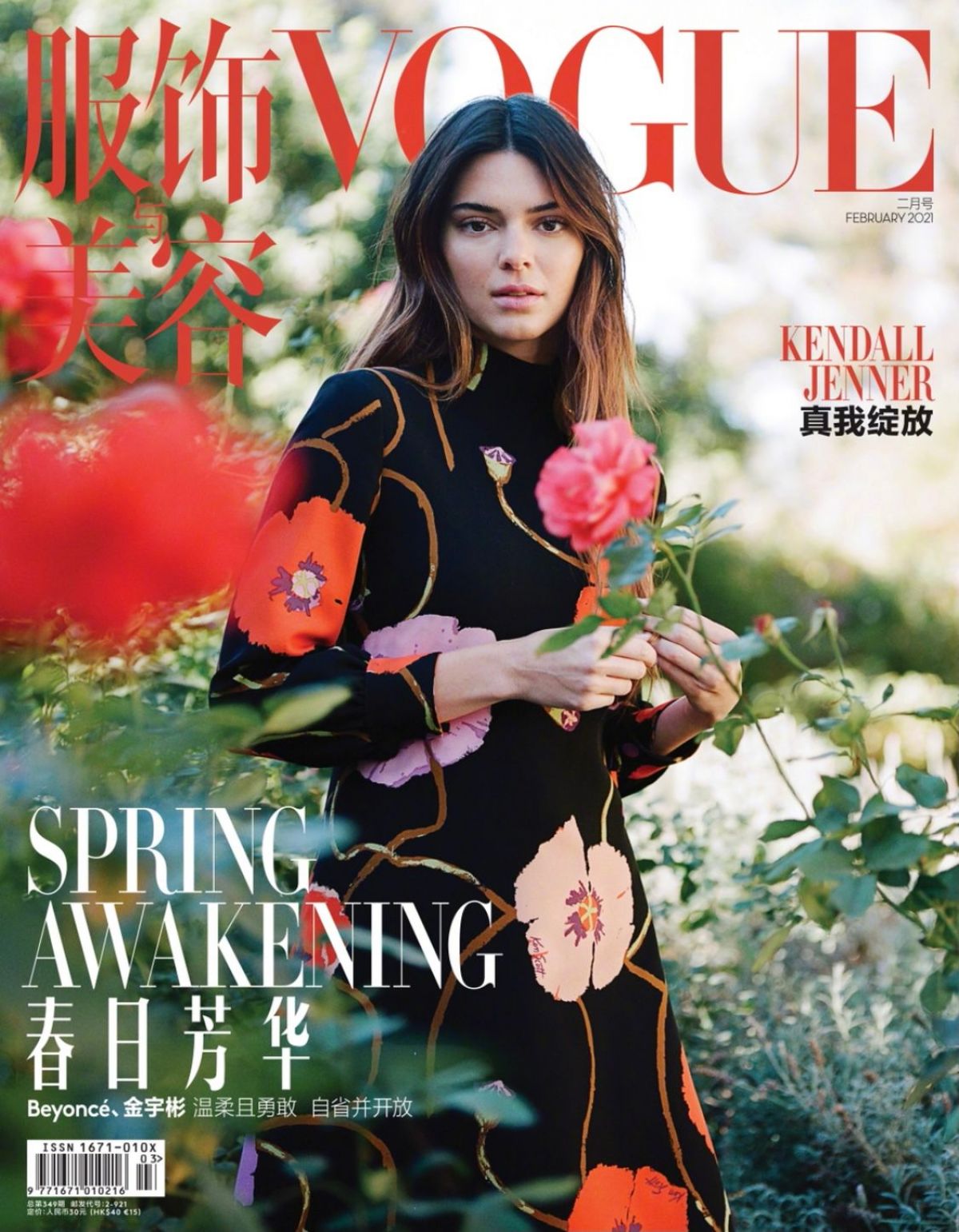 Vogue China’s February 2021 issue, the first one under Wintour’s direction, featuring Kendall Jenner wearing a Gucci floral dress in a floral garden on the cover. Courtesy

Putting international supermodels on the cover of a magazine, which was a selling point for Vogue China at the beginning, no longer resonates as strongly with the audience. The magazine’s February issue, the first one under Wintour’s direction, featuring Kendall Jenner wearing a Gucci floral dress in a garden on the cover, was met with criticism on both Instagram and China’s microblogging site Weibo.

Weibo user Zhengpailicha said he would cancel the magazine subscription because of this abrupt change in visual direction, while fashion influencer Fashion_Bangz, with 4.31 million followers on Weibo, commented “oops……” on Vogue China’s post.

One editor that many are looking to fill the power vacuum is Chuxuan Feng, the founder of Huasheng Media. The group is the publisher of the Chinese editions of T Magazine, The New York Times Travel Magazine, Kinfolk, WSJ. Magazine, Wallpaper, Nylon, Drift and Fathers Magazine, has played a crucial role in the emergence of the China-centric aesthetic by collaborating with local creative talents, such as photographer Leslie Zhang, stylist Jeff Li and Audrey Hu, on productions, as well as putting a mix of local actors, directors, influencers and advocates of the covers to generate buzz on social media.

For example, T Magazine China was the first magazine to convince actress Fan Bingbing, who has made a strong comeback in 2020 from her tax evasion scandal, to appear on the cover together with her little brother Fan Chengcheng, who is a member of the popular boy band NEX7, wearing outfits from Loewe’s spring 2021 collection. The Weibo hashtag of them appearing on the same cover recorded 43 million views. 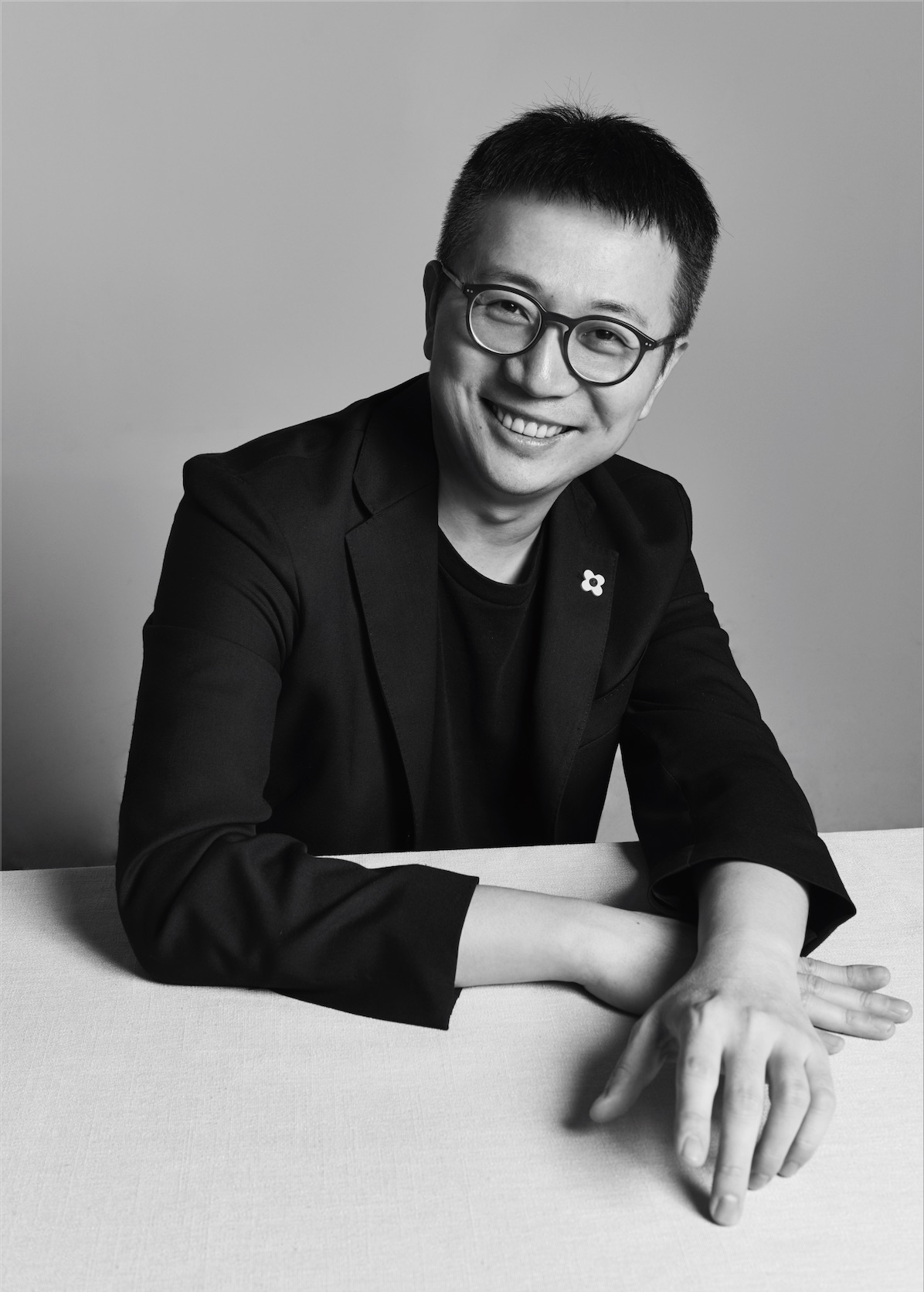 “The print publications are only part of the fashion media matrix, and a large part of the Chinese readers start to know about the publications through social media, offline events, videos and creative projects these days,” Feng told WWD.

“I have always believed that the quality of content is the foundation of any successful publication. Through fashion publications, Chinese readers no longer see it as a catalogue or a shopping list, or a place to read success stories. You have Tmall or Xiaohongshu for that. What they are looking for now is in-depth reporting, or more specialized content, such as a story about a kind of exquisite fabric, or an explainer of the cultural logic behind consumer products,” he added.

In 2021, Feng believes that the biggest challenge in the industry will continue to be how to deliver resonating content across all platforms, including print, Weibo, WeChat, TikTok’s Chinese version Douyin, social commerce platform Xiaohongshu and video community Bilibili.

While some media outlets attribute the demise of the influence of print publications in China to the rise of influencers, such as Gogoboi, Mr. Bags, Austin Li, and Rita Wang, Feng said their relationship with print media is in fact more aligned than in the West, and both are playing key roles in the market.

On top of creating more memorable moments for the Chinese fashion community, such as the well-received January-February issue of Wallpaper China, featuring Chinese model Zhao Lei and Du Juan on the cover, photographed by Leslie Zhang, while catering to luxury brands’ desire to effectively influence the consumers, the company also has plans to expand beyond publishing. 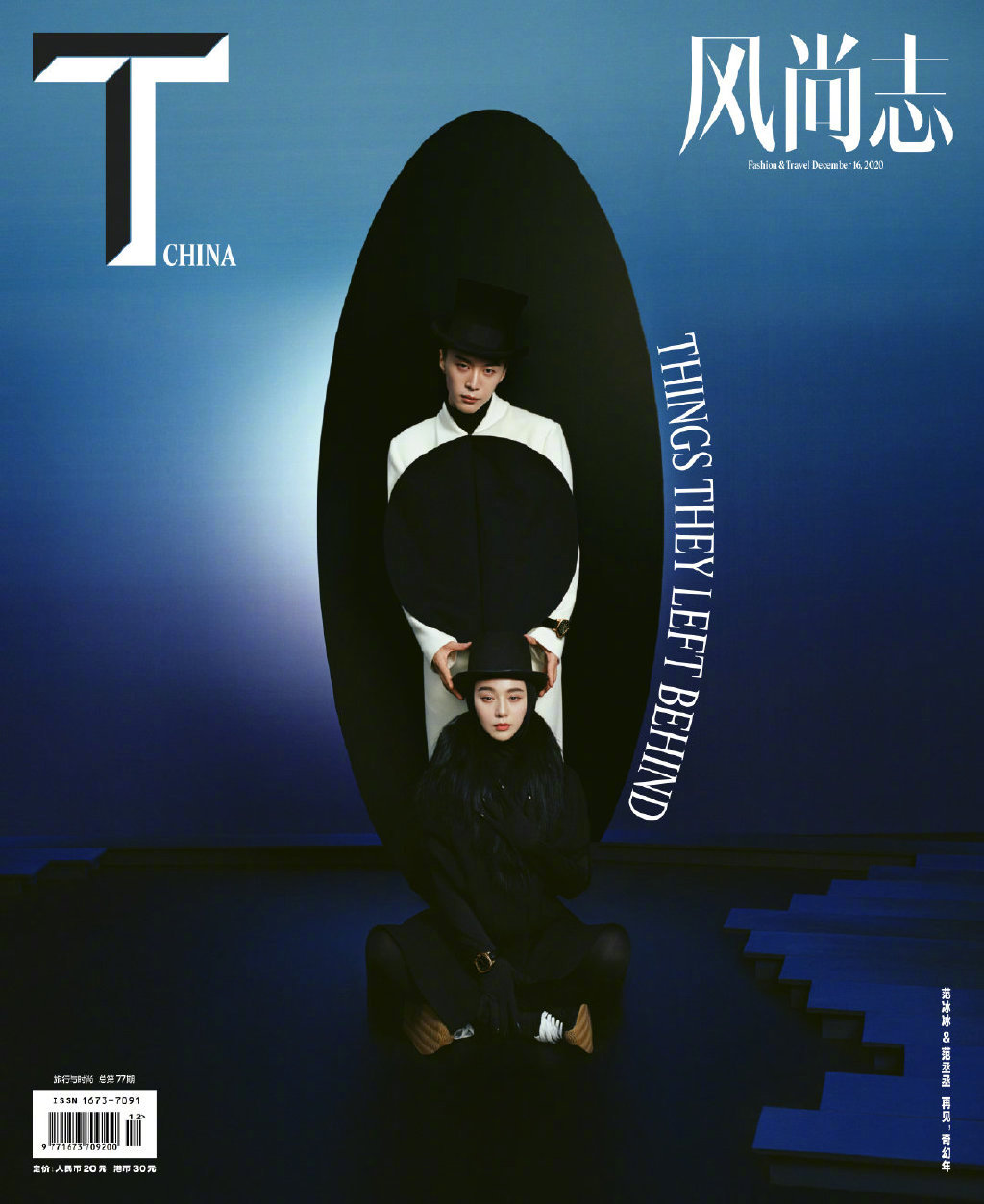 Famed actress Fan Bingbing and her brother Fan Chengcheng on the cover of the Chinese edition of T Magazine. Courtesy

It opened a bookstore specializing in architecture and design at Aranya Art Center in Qinhuangdao, a popular coastal city in Hebei province where affluent Beijing residents escape to for weekend getaways. This year, it plans to open specialty bookstores for children, art galleries in universities, a boutique hotel and invest in a European perfume brand.

As COVID-19 rocked most of the power players in China, including Modern Media, Hearst and Condé Nast, Huasheng Media has taken in a number of media veterans to spearhead the development of its media brands. To name a few, Anita Chang, a founding member of both Condé Nast Taiwan and China divisions, joined the company as chief operating officer. Baojian Li, former publisher of Vogue China and fashion director at Elle China, took on the role of group editorial director, general manager and editor in chief of WSJ. Magazine China, and Anson Chen, former fashion director at GQ China, is now its fashion director and deputy editor.

A former employee for a decade at Lifestyle Media, the publisher of the Chinese edition of Madame Figaro, So Figaro, Wonderland and OK Magazine, Feng secured financial support from Ruigang Li, founder of China Media Capital, one of the largest media conglomerates in China with strong ties to Beijing, and launched Huasheng Media in 2017. Feng also holds the position of vice president at the parent company.

Another standout in the turbulent landscape in 2020 was the Chinese edition of Marie Claire. With former Condé Nast Traveler China editorial director and GQ China lifestyle director Alex Sun taking up the role of editor in chief, the magazine, which was sold to China’s largest apparel brand Heilan Home and a group of private investors from Hearst China in 2018, managed to continue building a distinctive visual narrative while staying true to the needs of a new generation of modern Chinese women. 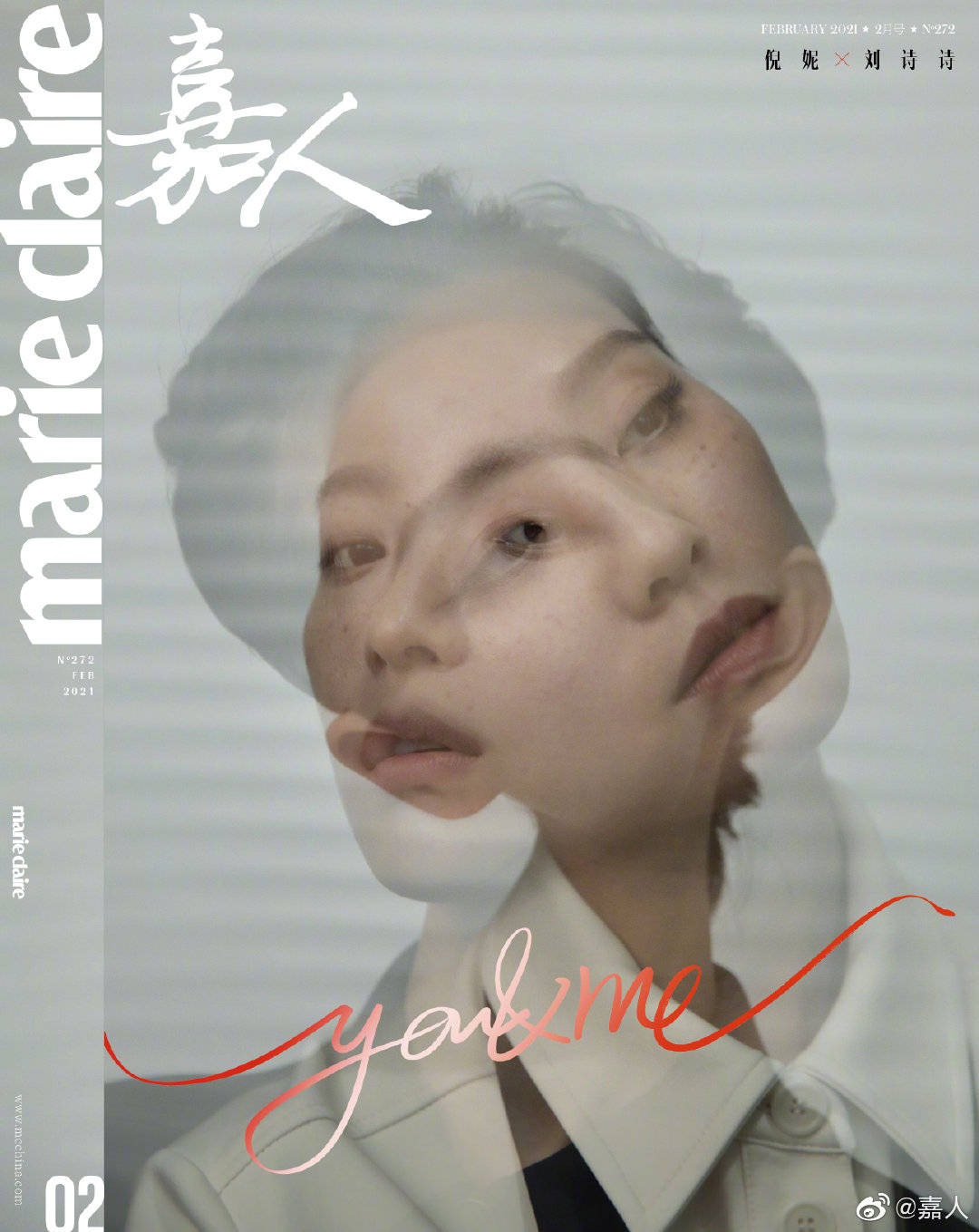 Actress Ni Ni and Liu Shishi on the cover of the February 2021 issue of Marie Claire China. Courtesy