Seven years after Credit Suisse promised federal prosecutors that it would stop helping rich Americans hide their wealth from tax collectors, a whistle-blower is contending that it continued to do just that, raising the possibility that the Swiss bank could face a fresh investigation and steep financial penalties.

The allegations, laid out in documents sent last week to the Justice Department and the Internal Revenue Service, were made by a former Credit Suisse employee who said that the bank continued to hide assets for its clients long after it promised prosecutors it would close those accounts, according to copies of documents obtained by The New York Times.

The whistle-blower, whose identity is unknown, is also contending that Credit Suisse lied to federal prosecutors, the Internal Revenue Service and members of Congress during their yearslong inquiry into how Swiss banks helped Americans defraud the government. Those investigations ultimately led to a settlement in May 2014 between Credit Suisse and federal prosecutors, in which the Swiss bank pleaded guilty to helping some of its American clients evade taxes by cloaking their wealth through offshore shell companies.

Credit Suisse was fined a total of $2.6 billion, but avoided even higher fines because it vowed to the Justice Department and a Senate panel that it had not only stopped the practice, but that it would close “any and all accounts of recalcitrant account holders.” The bank also pledged to help the United States pursue other criminal investigations, according to the plea agreement. Credit Suisse’s guilty plea and steep fine were rare in 2014. It was the first time in more than two decades that a lender of its size had admitted wrongdoing in an American court.

Jeffrey Neiman, a former federal prosecutor who has represented the Credit Suisse whistle-blower since 2014, said his client was coming forward with more information now because there was a new administration in place.

In negotiating with the Justice Department in 2013 and 2014 when Barack Obama was president, Credit Suisse hired two high-profile figures — Broderick Johnson, a lobbyist who advised the Obama re-election campaign, and Christopher A. Wray, a lawyer who had run the department’s criminal division and would later be named director of the Federal Bureau of Investigation. And even though Mr. Neiman said his client provided information to the authorities around that time that led to the arrest in 2015 of a retired business professor who hid his fortune with the help of Credit Suisse, Justice Department officials did not appear to consider that case a reason to renegotiate its settlement agreement.

Then came the Trump administration, whose officials did not make white-collar crime a priority, leading to steep drop-off in fines.

“With the Biden administration, there is new hope that banks that continually and serially engage in actions to defraud the United States are held accountable,” Mr. Neiman said in an interview.

In a letter on March 3, Mr. Neiman said his client contended that executives at Credit Suisse continued to help U.S.-based clients shield their wealth from American tax authorities despite the 2014 plea agreement, in part by hiding the identities of the account holders.

“The conspiracy continued well after the plea agreement and sentencing of Credit Suisse in 2014 and may continue to be in existence today,” Mr. Neiman wrote in the letter to Carlos Tarrago, an I.R.S. tax analyst working in the agency’s whistle-blower’s office.

A spokeswoman for Credit Suisse said: “Following our settlement in 2014, Credit Suisse has cooperated fully with U.S. authorities and will continue to do so.”

After getting information from another whistle-blower in 2007, the U.S. government began a well-publicized campaign to weed out tax dodgers with Swiss bank accounts. But while UBS, which had also been accused of helping rich Americans commit tax fraud, was forced to give up the names of about 4,500 U.S.-linked accounts following an I.R.S. summons, Credit Suisse got off more lightly. By early 2014, before it struck its plea deal that May, Credit Suisse had only divulged information on some 238 out of 22,000 U.S. clients. 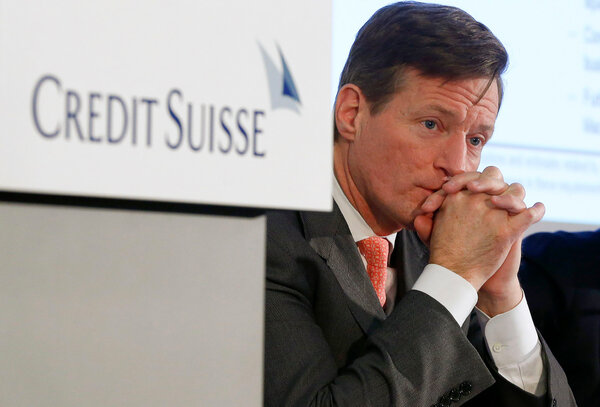 That February, Credit Suisse’s chief executive at the time, Brady Dougan, told lawmakers at a hearing that the bank had cleaned up so that it only did business with clients who were in compliance with tax laws.

How Has the Pandemic Changed Your Taxes?

Nope. The so-called economic impact payments are not treated as income. In fact, they’re technically an advance on a tax credit, known as the Recovery Rebate Credit. The payments could indirectly affect what you pay in state income taxes in a handful of states, where federal tax is deductible against state taxable income, as our colleague Ann Carrns wrote. Read more.

Mostly.  Unemployment insurance is generally subject to federal as well as state income tax, though there are exceptions (Nine states don’t impose their own income taxes, and another six exempt unemployment payments from taxation, according to the Tax Foundation). But you won’t owe so-called payroll taxes, which pay for Social Security and Medicare. The new relief bill will make the first $10,200 of benefits tax-free if your income is less than $150,000. This applies to 2020 only. (If you’ve already filed your taxes, watch for I.R.S. guidance.) Unlike paychecks from an employer, taxes for unemployment aren’t automatically withheld. Recipients must opt in — and even when they do, federal taxes are withheld only at a flat rate of 10 percent of benefits. While the new tax break will provide a cushion, some people could still owe the I.R.S. or certain states money. Read more.

Probably not, unless you’re self-employed, an independent contractor or a gig worker. The tax law overhaul of late 2019 eliminated the home office deduction for employees from 2018 through 2025. “Employees who receive a paycheck or a W-2 exclusively from an employer are not eligible for the deduction, even if they are currently working from home,” the I.R.S. said. Read more.

Self-employed people can take paid caregiving leave if their child’s school is closed or their usual child care provider is unavailable because of the outbreak. This works similarly to the smaller sick leave credit — 67 percent of average daily earnings (for either 2020 or 2019), up to $200 a day. But the caregiving leave can be taken for 50 days. Read more.

Yes. This year, you can deduct up to $300 for charitable contributions, even if you use the standard deduction. Previously, only people who itemized could claim these deductions. Donations must be made in cash (for these purposes, this includes check, credit card or debit card), and can’t include securities, household items or other property. For 2021, the deduction limit will double to $600 for joint filers. Rules for itemizers became more generous as well. The limit on charitable donations has been suspended, so individuals can contribute up to 100 percent of their adjusted gross income, up from 60 percent. But these donations must be made to public charities in cash; the old rules apply to contributions made to donor-advised funds, for example. Both provisions are available through 2021. Read more.

Behind the scenes, Credit Suisse had been negotiating for months with the Justice Department about a settlement. The bank armed itself with a powerful lobbyist, Mr. Johnson, a senior adviser to the 2012 Obama presidential campaign. In September 2013, Mr. Johnson emailed top department officials saying that Mr. Dougan was eager to get the investigation resolved, according to news reports. Just a few months later, Mr. Johnson became a liaison between the Obama White House and government agencies including the Justice Department. Mr. Johnson didn’t respond to an email requesting comment.

The Swiss bank also hired Mr. Wray, then a partner at King & Spalding in Washington who had served as the head of the Justice Department’s criminal division and oversaw the Enron task force. (Mr. Wray became the director of the F.B.I. three years after he negotiated the final plea deal for Credit Suisse.)

“It is a mystery to me why the U.S. government didn’t require as part of the agreement that the bank cough up some of the names of the U.S. clients with secret Swiss bank accounts,” Carl Levin, then a Michigan senator leading an investigation into offshore tax avoidance, said after the 2014 plea agreement.

In the interview, Mr. Neiman, the whistle-blower’s lawyer, said that in July 2014, after the plea deal was signed and as Credit Suisse awaited its final sentencing, he told officials at the tax division of the Justice Department and federal prosecutors who had worked on the case that his client had information that the bank had continued to cloak money held by some U.S. account holders. He gave them one name in particular — Dan Horsky, the retired business professor, who lived in Rochester, N.Y.

The tip checked out. The following year, federal agents arrested Mr. Horsky, who had amassed a $200 million fortune and hidden it with the help of Credit Suisse bankers using offshore shell companies, court documents show. The arrangement lasted for several months after the bank signed its plea deal.

It is unclear why the Justice Department did not notify the court and change the terms of its settlement with Credit Suisse based on the information from the whistle-blower — either before Credit Suisse’s final sentencing or after Mr. Horsky’s case became public. At the sentencing, lawyers for both sides told the court that they had no information to add that would affect the agreement.

Officials who would have had authority to make the decision to review the Credit Suisse case for possible breaches in 2014 and 2015 — including James Cole, who was then the deputy attorney general, and Dana Boente, the U.S. attorney in the Eastern District of Virginia — did not respond to requests for comment.

In 2015, Mr. Horsky pleaded guilty to defrauding the U.S. government and said that he would cooperate with prosecutors. In 2017, he was sentenced to seven months in prison. Some details of his sentencing are sealed, and a federal judge denied a request by Bloomberg News to unseal it. The judge said he denied the request after consulting with the Justice Department and Mr. Horsky’s lawyers.

Mr. Neiman’s client could be richly rewarded if prosecutors move to impose more fines on Credit Suisse. Under an I.R.S. rule, whistle blowers can get as much as 30 percent of the amount of any additional money the government gets. And, Mr. Neiman said, the whistle blower has more names of American account-holders beyond Mr. Horsky’s, although he wouldn’t say how many.