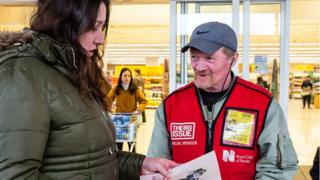 Big Issue sellers, forced off the streets by the coronavirus lockdown, are relying on emergency bailouts being provided by the magazine.

Lord Bird, founder of the magazine, which helps the homeless earn a living, says many have been left in a “parlous state” without an income.

He says sellers and the magazine are unable to get government support for lost earnings during the crisis.

So the Big Issue is giving sellers cash from online sales and subscriptions.

The ban on street selling has threatened to take away the regular earnings of its vendors.

“I genuinely don’t know what I’m going to do, I really don’t,” says Robin Price, in Weston-Super-Mare, Somerset, who has been selling the magazine for 26 years.

Meanwhile, Simon Gravell, a vendor in Norwich, fears it will “put me back to where I was 10 years ago, sleeping rough”.

In a bid to ensure the Big Issue survives the lockdown, the magazine has switched to subscriptions and online sales.

This income will be distributed to sellers, including those who have been put into temporary accommodation for the homeless.

And for the first time, the Big Issue will also be on sale in shops, including Sainsbury’s and McColl’s.

Lord Bird says there would usually be 1,500 to 2,000 street sellers over the course of a year.

The magazine has made contact with about 1,000 of these.

And they will be given cash, vouchers or top-ups for electricity and gas during the weeks when no street sales are possible, including by digital transfer.

Billions have been promised by the government to support those employed or self-employed whose incomes have disappeared because of the coronavirus shutdown.

But Lord Bird says the sellers, who operate as independent traders, are unlikely to have the financial records needed by the self-employed to get assistance.

The Big Issue is not their employer, so cannot claim under the job-retention scheme.

And it has been trying to help sellers get universal credit support – but that can mean delays.

Will Adams, who sells the magazine in Exeter, says: “My life has been affected drastically, as the Big Issue was my only income.

“I now have to go through the universal credit route, which is really hectic as you can imagine.

“I hate the fact I have to go back on benefits, as I have been working for a while now.”

Lord Bird says the magazine will carry on being independent and promoting self-reliance – under the principle of a “hand up, not a handout”.

And he is determined the magazine’s “spirited club of solidarity” will return to the streets after the lockdown.