Boris Johnson has been urged to get a grip on the exams crisis as Labour and backbench Conservatives united in their criticism of the botched handling of A-level results in England and headteachers came out in favour of a Scotland-style solution using teachers’ assessments.

The government’s attempt to placate angry parents and students backfired over the weekend when the exams regulator Ofqual scrapped rules on allowing pupils to appeal against their grades using the results of mock exams, hours after the rules had been published and endorsed by ministers.

Oxford University announced that it was unable to offer further places to state school applicants affected by the grading fiasco because of a cap on numbers imposed by the government.

On Thursday GCSE results are due to be published for more than 600,000 year 11 pupils in England and 100,000 older students aiming for crucial passes in maths and English that qualify them for further training or study.

Tory MPs reported that they were receiving large numbers of representations from frustrated constituents, with more expected to flood in after the GCSE results. One former cabinet minister said they had warned ministers about the threat of grading decisions being overturned by judicial review.

Special advisers to Gavin Williamson, the education secretary, have been assuring Tory MPs that Ofqual’s decision to revoke its appeals process eight hours after it was published on Saturday afternoon was because of technical hitches.

A-levels: why has Ofqual suspended its criteria to appeal grades?

But the Department for Education was left in the dark by Ofqual’s decision, with one insider describing the department as being “blindsided” by the late announcement, and relations between the two remaining strained.

Hundreds of A-level students protested in Parliament Square and outside the Department for Education on Sunday against the downgrading of exam results. 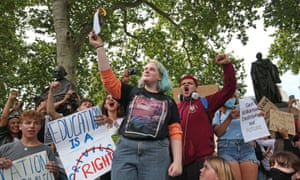 Labour’s deputy leader, Angela Rayner, called on Johnson to cancel a planned break in Scotland and take direct command of the situation. “The prime minister must now take personal responsibility for this crisis by addressing the country in the next 24 hours to explain precisely how he will end this historic injustice,” she said.

Labour is calling for the government to hold an “urgent technical review” of Ofqual’s algorithm and set out specific new rules for GCSEs to avoid a repeat of the problems seen in A-levels.

Labour’s proposals include a bar on candidates having their school-assessed grades lowered below a 4 in GCSE maths and English, and that no year 11 pupil should have their grade lowered from a pass to a U.

The shadow education secretary, Kate Green, also said no GCSE result should be moderated down by more than two grades.

With pupils and teachers still unclear about how the A-level appeals system will work, a growing number of Conservative MPs have begun voicing their frustration publicly, and many more have raised concerns with ministers in private.

The North Dorset MP Simon Hoare tweeted: “Beyond a joke. This smacks of naive incompetence,” adding that he hoped the cross-party education select committee would be “ruthless” in scrutinising those involved.

The former health minister Stephen Hammond said: “I have written to the Department for Education regarding last week’s A-level results to state it is imperative that a fair, simple and quick appeals process is put in place ASAP.”

A former Conservative MP said it was hard to see how parents, pupils and teachers could be placated. “You could put Plato in charge of it now and it would still be a massive mess,” he said.

‘I feel utterly let down’: students on Ofqual’s review of A-level appeal criteria

Williamson was already facing the immense challenge of ensuring all pupils in England return to school full-time from early next month, as Johnson has repeatedly promised. The exams crisis has added to the sense among some of Johnson’s colleagues that Downing Street is failing to avoid foreseeable political pitfalls.

School leaders began to voice their support for following Scotland’s example and dropping the results produced by a statistical model in favour of those assessed by schools and teachers.

The algorithm used by Ofqual was mainly based on a school’s past results and individual pupil attainment. Teachers and schools were asked to submit grades, known as centre-assessed grades, but these were influential in only a small number of cases.

The Worth Less? campaign group representing hundreds of secondary school heads called for teacher-assessed grades to be used to replace Ofqual’s grades.

“It’s clear that the DfE has completely lost control. This dreadful episode must be put to bed with immediate effect,” said Jules White, a secondary school head and leader of Worth Less? “The prime minister must step in and confirm that teacher-assessed grades will be awarded in every case. This will put the minds of every A-level and GCSE pupil to rest and let headteachers get on with planning for full-scale reopening in just two weeks.”

Geoff Barton, the general secretary of the Association of School and College Leaders, said: “It is time for ministers to stop the chaos and fall back on teacher-assessed grades rather than prolong this nightmare.”

Paul Whiteman, of the National Association of Head Teachers, said the government and Ofqual should review all results lowered by two or more grades. “The only other option available to government to deal with the situation is to rely solely on their student centre-assessed grades,” he said.

Layla Moran, the Liberal Democrats’ education spokesperson, said: “With the education secretary’s botched handling, no one has confidence that this week’s GCSE grade awards will be any less of a fiasco. He has to go.

“To claw back some public confidence, the prime minister must cancel his holiday. He must intervene before more young people have their futures stolen.”

Oxford University said it had “​looked carefully”​ at all students who had failed to receive their target A-level grades​ and offered places to 300 – many more than in previous years. “The overwhelming majority of these are UK state school candidates, from disadvantaged backgrounds. As a result our UK state school intake this year currently stands at 67.8% – an increase of 5.7% compared to 2019​,” Oxford said.