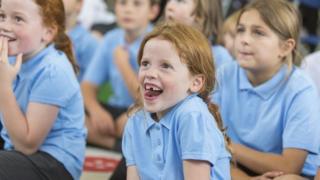 Scores of local councils say they cannot guarantee primaries will reopen on 1 June, throwing government plans to get pupils back to school into chaos.

Only 20 of 99 English councils to respond to a BBC Breakfast survey said they were advising schools to open more widely on Boris Johnson’s target date.

Of the 99 who responded, two thirds (68), could not guarantee schools would reopen to Reception, Year 1 and Year 6.

It comes as the government prepares to publish scientific advice on its plan.

Ministers have been insisting that they would only be calling on schools in England to reopen if the scientific advice said it was safe to do so.

Teaching unions, heads and politicians have been calling for that advice to be made public.

BBC Breakfast carried out a snap-shot survey of the 150 local authorities that oversee primary schools over the past 48 hours.

It is the head teachers and the governing bodies on the ground who need to make arrangements for social distancing or keeping children within small groups to limit the potential spread of infection.

Schools across England have been open to small numbers of vulnerable pupils and the children of key workers since they formally closed at the end of March.

But the prime minister announced plans for a phased reopening of primaries from 1 June, when he set out the government’s plans to move gradually out of lockdown measures on 10 May.

Almost immediately, teaching unions and head teachers warned of safety concerns and practicalities in many schools which, they argued, made safety measures unfeasible.

And, with scientific evidence on the way the virus is spread by children limited, there are concerns the wider opening of schools could lead to a second spike in Covid-19.

Teaching unions also called for a more regional approach, with local authorities being given the final call.

Education Secretary Gavin Williamson made a plea for the sector to let children get back to school, and a string of ministers lined up to try to persuade parents, many of whom are concerned about a return, that schools would be safe.

But, as opposition continued to grow, there has been a softening of the government’s approach.

On Wednesday, Justice Minister Robert Buckland, said the government was prepared to listen to the concerns of head teachers and council leaders, and hinted it might step back from the 1 June date.

He also acknowledged schools would not reopen in a uniform way across England after half term.

The governments of Wales, Scotland and Northern Ireland have not yet set a date for their schools to reopen.

A spokesman for the Department for Education said: “We want children back in schools as soon as possible because being with their teachers and friends is so important for their education and their well-being.”

He added that plans for a cautious, phased return of some children was based on the best scientific and medical advice and insisted the department had been engaging closely with a range of organisations including the teaching unions.

But Paul Whiteman, general secretary of the National Association of Head Teachers, said support for a fixed date for school return was vanishing quickly.

“What is needed now is local flexibility to determine when it is right for schools to open up to more pupils.”