The provision of free school meals is a useful weapon in the fight against childhood obesity, according to a groundbreaking study, whose findings are likely to be studied closely by health officials and politicians amid mounting concerns about the problem.

A quarter of UK children are overweight or obese when they start school aged four or five, and this rises to a third of children by the time they leave primary school at the age of 11.

The new study, by Birgitta Rabe and Angus Holford at the Institute for Social and Economic Research at the University of Essex, tracked the impact of the policy, which provides a free midday meal for all four- to seven-year-olds in English primary schools. It concludes that free school meals make a valuable contribution to tackling Britain’s childhood obesity crisis.

The pair looked at body mass index (BMI) data for children in 16,000 primary schools to examine the impact of the nutritionally balanced, universally free meals, with their maximum 530 calories, that were introduced by the coalition government in 2014.

Rabe said: “This intervention has a significant impact by reducing reception children’s obesity rates by 7%. It’s a small impact but it’s fast and it’s more effective than other school-based initiatives on children of this age, like running the daily mile or healthy eating messaging.”

They found “a steady decline of average BMI over the school year, totalling approximately 12% of a standard deviation, which suggests that the school environment has a beneficial influence on the energy balance of children”.

Significantly, the children’s BMI reverted to higher levels after school holidays of just one or two weeks, which invites speculation that children consume more calories at home or expend less energy through play and exercise than when they are at school. 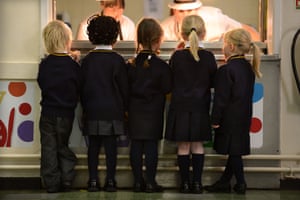 The new healthy school meals, which was prompted by campaigns from Jamie Oliver, cost £437 a year for each child and have hugely reduced the use of home-packed lunches for Britain’s youngest schoolchildren.

Research done in 2010 found that the average lunchbox contained at 624 calories, and two-thirds of lunchboxes had at least two items of high-calorie, nutritionally empty foods, such as sweetened drinks, crisps and chocolate bars.

Holford added: “We found a beneficial effect of school meals nationally, but it is also apparent when we look only at schoolchildren in more affluent areas. This suggests that even for children of middle-class parents, the school meals were more nutritionally balanced than what they were bringing in their lunch boxes.”

The study is part of a larger Nuffield Foundation project tracing the impact of the policy of providing balanced school meals for all young children, on bodyweight outcomes, rates of absence as a result of ill health and attainment in school tests, with the full results due to be published early this summer.

Campaigners want the government to roll the policy out to all primary and secondary schoolchildren, in a bid to counter a predicted rise in childhood obesity levels.

Many US cities, such as New York, Boston and Chicago, provide free school meals for all school-age children. Free school meals have been given to children in Sweden since 1973 and in Finland since 1948.

But there is speculation that the policy, which costs £600m a year, may be scrapped in this week’s budget as the Department for Education is asked to find savings of 5%. In 2017, Theresa May’s government signalled that it wanted to end the policy, a move Oliver described as a disgrace.

“The policy of Universal Infant Free School Meals ensures that every day infants can enjoy a hot, nutritionally balanced free school meal, normalising healthy eating from their very first day at school. These early results are exciting, particularly when a study from University of Leeds recently showed that only 1.6% of primary school packed lunches meet the nutritional standards for school meals, and less than a fifth contain any vegetables or salad.”

• This article was amended on 10 March 2020 in two respects. An earlier version said that the study looked at BMI data for 16,000 children in primary school. That should have said data for children in 16,000 primary schools. The study found a steady decline of average BMI over the school year, totalling approximately 12% of a standard deviation, not “7% of a standard deviation”.