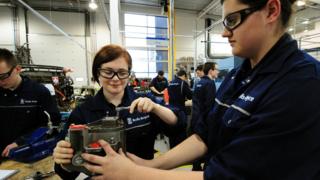 Apprenticeships must be “front and centre” of plans to boost skills in the post-Covid recovery, says Robert Halfon, chair of the education select committee.

But he wants the funding levy for apprenticeships to be better targeted at young people and the disadvantaged.

And he called for a big increase in degree apprenticeships in universities.

With the government expected to announce a major investment in skills and training to recover from the pandemic, Mr Halfon called for apprenticeships to be made the cornerstone.

In a speech to the Edge vocational education charity, he called for a “recasting of our skills priorities to place apprenticeships front and centre – to create a new apprenticeship culture as the lifeblood of training and employment”.

In the wake of the pandemic, Mr Halfon warned many employers will face tough financial choices and there had to be significant funding to make sure that apprenticeships and training are not cut.

“We need to make sure there is every possible incentive,” he said.

“Businesses will be worried about every single penny.”

The apprenticeship levy, paid by bigger employers, should be “used primarily on apprenticeships for 16 to 24-year-olds and to tackle disadvantage”, said the Harlow MP.

This follows criticism from Education Secretary Gavin Williamson that senior managers were using apprenticeship levy funding to subsidise qualifications for themselves.

There have also been warnings about existing jobs being “rebadged” as apprenticeships to get levy funding.

But Mr Halfon said that good quality apprenticeships should be focused on creating a “ladder of opportunity”, linking young people with employment.

And he warned of an “enormous amount of snobbery” which had prioritised academic courses over vocational skills.

The link with work should reach far into universities as well as further education, he says.

Universities should offer many more degree apprenticeships, he argues, and those taking academic degrees should have clear work-based components.

Mr Halfon has been a longstanding champion of apprenticeships – and says he has “never understood” why the UK has been so “elitist” in its attitudes towards vocational skills and training.

Mr Halfon’s campaigning over apprenticeships began with an eye-opening meeting with a group of disadvantaged young people more than a decade ago.

“It was one of the most important political moments of my life,” he said.

Even though these young people wanted to get training to get jobs, they could not access any apprenticeships or even afford to get to where training was offered.

He says he still remembers the sense of these young people being stuck and needing a way out.

“I decided, if elected, I would make it my number one priority,” he said.