With Covid-19 cases hitting nearly half of the UK’s universities, students and parents have painted a depressing picture of life as a fresher.

They were talking to Labour leader Keir Starmer in an online town hall meeting.

Father of a Leeds University student, Sanjiv Sachdev, appeared visibly shaken as he told of what should have been a new start for his son.

“He’s caught Covid and he’s far from home, and far from friends and family. He’s stuck in a small room,” he said.

It comes as there are reports of Covid-19 outbreaks at almost half of all UK universities, and as Labour calls for a mental health support package to be available for all students.

Mr Sachdev added: “It’s infuriating because this is entirely predictable and predicted. I do feel, very strongly, a sense that it was wholly avoidable.

“And I have a very strong sense that there’s been a complete and abject failure to both take responsibility and action for something that potentially has long term consequences for young people.

“Yes young people don’t necessarily die from this, but it can be very serious for them. So there’s a level of responsibility again about this that is really enraging.” 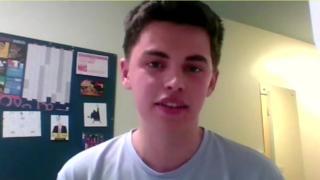 The worried father said he lived hundreds of miles away but had arranged an online delivery of food for his son.

Joe Haslam is waiting for results of a test after other students in his flat of six tested positive.

He is living in a 24-floor student accommodation block called Central Village, also in Leeds.

Joe described how the vast majority of its 1,000 student residents were using a single lift because one is out of order.

“It doesn’t matter how much cleaning you do, once you get a few cases in there, it’s going to run rife.”

He added: “I’m symptomatic, so I’m guessing I’m going to get a positive result.

“The tests we had were home tests, so we all had to sit as a flat in the kitchen swabbing each other – so it was an unusual freshers’ bonding experience.”

He’s now a few days into isolation along with his new flatmates.

“I’m sure you’ve seen in the media all these photos of signs in people’s windows and there are loads.

“And every day you see more go up, saying very damaging things about Boris which I won’t repeat – but a lot saying: ‘We’re in isolation’

“People are trying to almost reach out of it, because these groups of six we don’t really know that well. Everyone is just trying to make friends because that’s what normally Freshers’ Week is.”

‘When can I see my parents?’

Joe’s physics lectures are online and he is not doing physics practicals. He has videos to watch instead.

Another first year student, Aurora King-Jones, told how friends in her accommodation had to walk for three hours to get tested for the virus because the university testing centre was booked out.

“With Leeds being in local lockdown it’s quite difficult to know when we will be able to go home and see our parents,” said Aurora.

“We’ve been told we can go home for Christmas – but obviously at the moment the guidance is that we can’t mix with other households outside – so with us being told we have to walk that far, but we can’t see our parents, it’s obviously quite a stressful thing.”

She says she shares a kitchen with other flats, where people have tested positive.

“I could be potentially living next to someone with symptoms so it’s quite scary.

“We haven’t been told, other than at Christmas, when we can next see our family.”

Aurora has no face-to-face teaching on her course now, and says she is sitting in a room doing lectures online that she could have been doing from home.

A University of Leeds spokesman said it understood that self-isolating at university could be worrying and it offered a range of support to help students.

“Our Residence Life team is providing guidance to self-isolating students on food shopping, bin collection and self-isolating requirements in line with government guidance.

“We regularly update our coronavirus web page with information and guidance for students.

“It is crucial that students report they are self-isolating: this triggers a notification to the Residence Life Team, which then gets in touch directly with the students to provide guidance and support.”