Home » Education » How to Make Remote Learning Work? Unmute Yourself!

This article is part of our latest Learning special report, which focuses on ways that remote learning will shape the future.

Once upon a time, in a house in Englewood, N.J., whose greige paint was peeling with age, lived three children with 14 years of home-schooling among them.

Their parents, Casia and Roland Davis — whom I met in New York long before children came along — began home-schooling all three together in 2010, starting when Zachary was 7, Luke was 4 and Sophia was 2, largely because they found the local Montessori school overcrowded.

“We complained and they kicked us out,” Mr. Davis recalled. He and Ms. Davis were “unimpressed” with the local public school, he said. “And we didn’t think that as white middle-class people we’d be able to get financial aid for private schools,” he added. (The couple, massage therapists, met while working at a spa in the Hamptons.)

To prepare for home-schooling, the couple read a lot about the Montessori method. “The main idea we took away is to create an environment that calls children to learn,” Mr. Davis said. They also turned to parenting books, especially the classic “How to Talk So Kids Will Listen and Listen So Kids Will Talk,” and “How to Talk So Kids Can Learn — At Home and in School,” by the same authors, Adele Faber and Elaine Mazlish.

From the start, the Davises shared both the big picture and minute-to-minute choices about their children’s educations, drawing on their own very different educational experiences. Mr. Davis commuted from New Jersey to attend the private Horace Mann School in the Riverdale section of the Bronx and graduated from Harvard. Ms. Davis attended public schools in several different states and took some college classes but does not have a college degree. 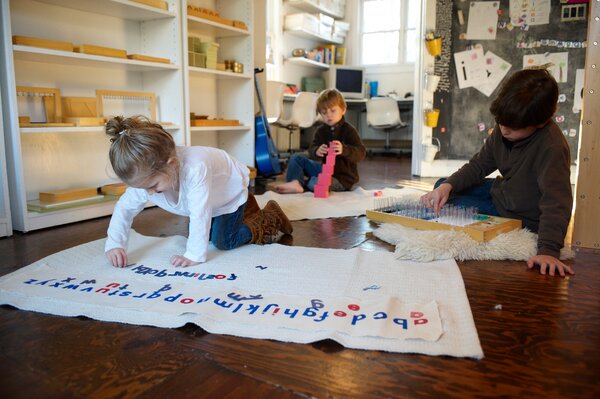 Ultimately, after four years of home-schooling, the Davises found out their family was indeed eligible for scholarships, first for all three at the Elisabeth Morrow School in their neighborhood and now for Zachary, in 12th grade at the Loomis Chaffee School in Windsor, Conn., and for Luke, in ninth grade at Phillips Exeter Academy in Exeter, N.H., which also provided the family with a much-needed computer for remote learning this fall. Sophia, who later opted to return to home-schooling and is now in her sixth year of it, hopes to earn a scholarship for a similarly competitive boarding school when the time comes.

In interviews in their backyard, we asked Zachary, now 17, Luke, who will be 15 in November, and Sophia, 13, and their mother — considered the school “principal”— what advice they’d offer to families now home-schooling or doing school-at-home. Not surprisingly, the teenagers had some advice for their parents, and other adults too.

This conversation has been edited and condensed.

What is your biggest tip for making learning at home work for you?

ZACHARY I’ve noticed that on Zoom, when you have yourself on mute, you need courage to enter the conversation because you actually have to actively click the off mute button. I’ve found it adds another layer, so we get long silences in discussion-based classes. If you keep yourself off mute, you don’t have to go past that step of clicking the mute button. It’s more natural.

If no one can see or hear you, it’s like you just float to the back of the class, and become this slacker?

ZACHARY Yeah, that’s not an exaggeration. People like me who talk a lot in classes are subdued from what we used to be like in the classroom.

So the idea is to be seen and make it easier to pipe up spontaneously? Sophia, has this been true for you, too, in the pods you’re in with other students as a home-schooler, which are now of course on Zoom?

SOPHIA Yeah, I’ve had a similar experience where I would turn my camera off and have my mute on and not engage. I just felt disconnected with everything turned off, and, like, I wasn’t even in a class and hadn’t learned anything. I was daydreaming or looking up things on Google or even watching Netflix sometimes.

And then I just started to put my camera on and speak up as much as possible. And it really changes the way that you feel, even if it isn’t easy and you get nervous. If you’re off mute and your face is on the screen, it’ll definitely make it just a better experience and more like you’re in the classroom.

ZACHARY And kids need work space where you’re not afraid to have yourself off mute and can talk on Zoom and go back and forth with classmates and teachers.

Speaking of work space, Luke, can you tell me a little bit about how you set yourself up this semester and why?

LUKE Last spring [when classes went remote], I was downstairs in the basement and turned all of the lights off except for one. My parents were both telling me not to do that, but I didn’t listen. I was just in the dark and I think that really messed up how I was feeling. Spring term was really bad.

And now that you’re starting your first year of boarding school from home?

LUKE Now there’s a big window right in front of me, lots of natural light in my own space in my room. And I’m doing a lot better.

So then, what are some of the practical challenges with learning in a home environment that you have dealt with or are still maybe dealing with?

ZACHARY If you have your own space, it can be really easy to live in almost exclusively. During my spring term, by 8 p.m., I’d see that my entire day essentially has been in my room. I didn’t have a change of scenery and it was getting monotonous. It had an effect on how awake I was every day and how much I could focus.

So, I think it’s really important between those classes to just go to a different place in the house and change up the scenery a little to get a bit of energy back because it’s a really easy hole to fall into. Also, if you’re having noise issues in the house and trouble staying focused, work outside if you can.

Also, I found my posture has gotten worse, my back hurts, I get headaches, and my eyes hurt a little. One of the ways I’m dealing with all that is to lift my computer up, with books and a computer stand, so I’m not slouching down. It seems like a small thing, but I think it can help with your posture and the way you’re feeling.

Luke and Sophia, since you’re younger, what role do you think parents should play when doing home-schooling versus school at home?

LUKE Parents should play more of a hands-off role for school-at-home than for home-schooling obviously, and also realize that Zoom can be really exhausting, sitting at our computers all day in classes and with homework.

SOPHIA I think not being too controlling is best. But if you see your kid not doing their work or really disconnected from the world or just in the room all the time, just check up on them because it’s hard to be at home isolated from the world, away from your friends and not allowed to go outside.

CASIA And I think a way parents can help is we have to be flexible. I would like everything clean, neat and organized. With three kids being home all day long and in a hurry between classes, I just have to let go of things. Did you see the pizza crusts in Zack’s room? I have to be OK with food upstairs and in the reality of three kids who are busy. And part of that is loving the kids more than loving the way I want the house.

Tell me about conflicts that have come up around schooling at home among the family.

ZACHARY Luke, you’ve had no conflict with your brother because he’s absolutely amazing, right?

ZACHARY The main thing is spatial conflict — there are a few spaces in our house that are more desirable to work in than others. And it’s been hard to negotiate.

SOPHIA I would say: Be conscious of other people’s situations, especially if you’re a big family and other people are having classes too. You can’t take up the entire space.

LUKE After years of saying she’s incapable of playing her violin in her room! (laughs)

SOPHIA In summary, we fight all the time!

LUKE Oh, that’s a great thing to put in The New York Times!