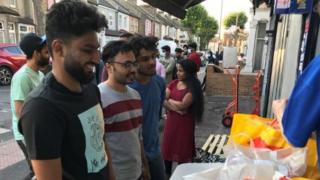 Hundreds of international students in the UK have turned to food banks after part-time work and funding from families dried up during lockdown.

Some have been unable to pay their course fees and have been threatened with suspension by their universities which would result in their visas being cancelled.

At Newham Community Project in east London, volunteers are feeding up to 600 students, most in their early 20s.

“This is their first time abroad,” he adds.

At the project’s base in East Ham, students queue round the block on Tuesdays and Saturdays.

They’re asked to register and prove they are genuine students.

Most are taking master’s degrees and are from India.

Some fear the pandemic means they will not be able to complete their qualifications.

International students have to prove they have the funds to cover rent, fees and living expenses before being granted visas.

If they are studying full time at degree level or higher at a UK university, they are usually allowed to work up to 20 hours a week, according to Home Office guidance.

The pandemic has struck a double blow.

Many have lost their jobs, while their families, in countries with their own outbreaks, can struggle to send funds overseas but international students have no recourse to public funds in the UK.

“It’s a very difficult time we are facing,” says Rahemunnisa Shaik from Hyderabad as she piles groceries into a pram.

She is studying for a two year Masters in Business Administration at the University of East London (UEL).

She arrived in the UK for the start of her course last September with her husband who was her dependent for visa purposes.

She gave birth to their first child, a baby girl, in May.

“My husband is supporting me. He lost his job because of coronavirus.”

His work at KFC was halted at the start of lockdown and he has still not been called back.

They have been unable to pay the rent on their room for two months and she owes £1,500 to the university, initially due in mid-July but later extended to mid-September.

UEL says it is “acutely aware” the pandemic has impacted the ability of some students to cover their costs and has provided nearly £1m in support since March.

“To qualify for an exceptional payment extension to 15 September, students must show they have been academically engaged with their programmes and had a good record of making payments before finding themselves unable to do so because of the current global health situation,” says the university.

Rahemunnisa hopes money will come through from her family in India soon but says transactions have been delayed because of the pandemic there.

As well as handing out food, Newham Community Project has been negotiating on behalf of about 300 students who are behind with their fees at 18 universities.

About half are from UEL.

Six of the other universities have agreed flexible payment plans, most to December, but an email received by a student at Anglia Ruskin University this week and seen by the BBC is demanding payment of £4,100 within seven days.

“If you do not pay the outstanding tuition fees you may be suspended and ultimately expelled,” the letter warns.

The university is required to report suspended or excluded students to UK Visas and Immigration, says the letter.

“Once reported to the UKVI it is expected that your visa will be cancelled and you’ll be required to leave the UK immediately to avoid any negative effects on your immigration record.”

Anglia Ruskin University says it is doing everything possible to ensure students are not adversely affected during the pandemic, with a “range of financial and pastoral support”.

The university says the original payment date was extended by two months from May to July and the letters ask students to get in touch if they are in difficulty, “so we can work together to resolve any problems”.

Lexiao Guan, from Chengdu in China, who has just completed a master’s in graphic design at Royal College of Art is not part of the Newham group but a month ago was unable to pay outstanding fees of £7,100, almost a quarter of the annual amount charged to international students by the college.

He usually earned enough money to fund his studies, as a freelance graphic designer and tutor, but the work dried up during lockdown.

“If they give me more time I can pay it,” he says – but he too received an email suspending him and warning that after two weeks the college was required to report him to the immigration authorities.

RCA later agreed to extend the deadline and reinstate all the students affected, although they are withholding final degree results until the fees are paid.

“We have successfully helped, via payment plans, funding applications and payments from our hardship fund, the vast majority of those who were suspended,” says the college.

Lexiao intends to return to China as soon as he has paid his debt but is “shocked” that “the world’s number one art institution” could put students under so much pressure while they were preparing for their final shows.

Back in Newham, Elyas says he first became aware of the problem at the end of the Muslim month of Ramadan in late May when about 50 students came into a local mosque asking for food.

The numbers grew, so Newham Community Project ran a massive appeal for donations.

Before the pandemic they provided food for about 30 needy households each week but now support 20 times as many.

The Home Office has issued guidance on concessions for international students during the pandemic which is reviewed regularly, while decisions on whether to suspend students for non-payment of fees are left to individual universities.