Home » Education » School still out for most pupils but what do parents think? 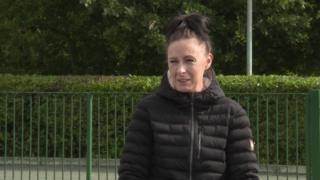 Relief that children will be kept away from school for another few months, or despair that they are losing out on education and time with their friends?

What do parents make of the government’s ditching of a plan for all primary school years in England to go back to school for four weeks before the end of term?

Jonathan Wills a parent from Barnton Primary in Northwich in Cheshire says families need to get back to some sort of routine.

“I think it’s going to be extremely difficult for kids and some families, because it’s a long time to try to recreate the structure that schools give you.

“And I think without that structure, a lot of schools and kids will struggle, particularly with the stresses of financial problems and then all the types of psychological problems.

Mother-of-two Victoria Rogers agrees: “I do think children should start coming back to school, as we need to get back to some form of normality.”

But elsewhere, mother-of-one Molly told the BBC she is relieved that not all primary years will be returning this term, as she would not have been prepared to send her daughter back to school.

“Until it is safe for parliament to sit next to each other and until it’s ‘safe’ to cuddle your own blood mother, then how is it deemed safe to mix your children with numerous other households?

“But our children can be placed into school with numerous other households’ children. Even at small groups of 15, how is that safe? When we are only allowed to meet up in groups of six?

“It’s either dangerous to us all or it’s not as dangerous as what they are making out.

“As much as my daughter needs to go back to school and the lockdown has taken its toll with her, I will not be sending her back.

“If it’s this big killer, keeping us away from blood relatives, then it’s not safe.”

For some families, there is a difference of opinion even within the family.

One mother-of-three – who was expecting two of hers to return to school before the summer – told BBC Radio Four’s Today programme that her children had opposing views on the matter.

“I know that one of them is going to be really disappointed at the prospect of not seeing her friends.

“That’s been something she’s really counting down to, even though we knew it was uncertain.

“But the boy in Year 5 will be absolutely delighted!”

As for her, she remains ambivalent on it all: “I feel sort of resigned to it really. I just feel sad for them that they’re not going to see their friends for such a long time now.”

Another mother told Today said she was “unsurprised” but “incredibly disappointed” by the news.

“I feel really sad for my son. I’ve got one son in year two, and another one in reception.

“My child in reception’s gone back, albeit only four days a week, every other week.

“And my older son, who is just about to turn seven, is desperate to go back, can’t understand, thinks it’s so unfair – which it is.

“He and the school are going to have to put up with my rather inadequate home schooling, while I’m stuck at home, also with a one-and-a-half year old, trying to juggle a business and everything else.”

But another mother, with two children aged eight and six, told Today she thought a return before the summer was too early.

“I’m actually relieved if schools don’t go back until September because I think it’s too soon.

However, for Nigel Rowlands, the past few weeks have been very difficult and he is glad to have his daughter back in school.

“It’s been difficult – we’ve been through a lot. There’s no structure, learning at home is entirely different to learning at school,” he told the BBC.

“I’ve been working from home. So we’ve just spent a huge amount of time together, confined within four walls with not a lot of other places to go to.

“We try to get out and do a daily walk, but that’s not the same as spending all day in school with other people.

“Having her back in school now has given some of that structure back and that’s reflected in her being connected with other children and you can see that in that her demeanour is completely different since she’s been back in school.”