Home » Education » This School Year Has Been Unlike Any Other

This article is part of our latest Learning special report, which focuses on ways that remote learning will shape the future.

A fall semester unlike any ever known is underway in America.

The coronavirus is lurking around every corner like a ghoul in a Halloween cornfield, waiting to leap out and frighten — if not sicken or kill — anyone who dares pass by.

It has created chaos in the world of education, as some schools refuse to open while others do, only to close again as cases rise. Some are online, while some are in person — or both. The pressure on students, teachers, administrators and parents is immense and has aggravated educational inequalities. Schools, after all, do more than deliver an education: they are a source of food, socialization and internet connections to the rest of the world — along with child care providers for working parents.

The instability for so many who depend on all that is grim.

But wait. In every dark time across history some people rise up and cope — more than cope really. They demonstrate resilience, creativity and an ability to innovate.

Some experts look at these efforts and hope that many will change — for the better — how students are taught and learn in the future.

Chris Cerf, who started his career as a high school teacher, served as the New Jersey education commissioner, deputy chancellor for New York City’s Department of Education, and is a founder of a nonprofit called Cadence Learning, is one of the optimists.

“I absolutely believe that we are going to come out of this pandemic having learned a great deal about how to deliver quality instruction to students,” he said.

You’ll find a handful of examples — snapshots, if you will — here and throughout our Learning section of creativity in a time of crisis.

It developed, as many things do these days, on Twitter.

In March, Anne Fausto-Sterling, an emerita professor of biology at Brown University, tweeted that professors should “teach the virus” whatever their discipline.

The ideas came pouring in with the hashtag #coronavirussyllabus, and Alondra Nelson, president of the Social Science Research Council and a professor of sociology at the Institute for Advanced Study in Princeton, N.J., collected them into a public document that now includes books (scholarly, fiction and graphic novels), medical journal articles, music and music videos, podcasts and radio, and archives.

Anyone can access the coronavirus syllabus; professors have already said they are using some of its resources in developing their classes. It is updated continuously, and once a month Professor Nelson issues a more curated version that appears on the Social Science Research Council web site.

“We’re really trying to capture all the ways human society has tried and is trying to make sense of this quite dramatic change,” she said.

Roberto de Leon starts his online English lesson by reading aloud with fifth grade students. When one student stumbles across a reference to a boa constrictor, the Bakersfield, Calif., teacher stops to describe how the snake squeezes its prey to death. Then he asks them what the boa has to do with the characters in the book.

Across the country, dozens of local teachers play the tape and discuss them with their own students.

It’s part of Cadence Learning, which began as a summer learning program after schools across the nation moved to remote teaching in response to the pandemic. Its goal is to expose more students to the best teaching.

Under the model, a network of 16 “mentor teachers” provide online instruction to about 7,500 students across the country. The mentor teacher appears on the screen, along with three to five students who ask questions and discuss issues. “Partner teachers” then show the tape or use the same lesson plan, working in virtual breakout rooms with their own students.

Cadence raised $4 million from philanthropic organizations to offer the program at little or no cost to school districts. It is also available to pods and home schoolers.

Physical Education: Socks and a Spatula

Even in pre-pandemic days, too few children were exercising as much as they should. Now, many are stuck inside for most or all of the day, barely leaving their couches, either because they are learning remotely — or playing video games.

“A high proportion of our students are low-income and many are not allowed to go outside at all,” Mr. Eckman said. “The parents need them at home to take care of siblings or fear the coronavirus or because they’re not in perfectly safe environments.”

Golf was one sport he set out to reinvent. He went to a local driving range and suggested his students ball up a sock and find a flashlight or candle stick “or anything you could hold with two hands and practice a swing.”

For badminton, he demonstrated the underhand motion with his racket, while the students used a spatula, and the ubiquitous socks. They used some of the same household items to learn an overhead cast for fishing.

During a recent trip to Chicago, Ms. Galan conducted live biking tours for each of her six classes. Calling it “The Wrigley Run,” she pointed out some of the city’s landmarks as her students followed along on their phones while walking around their neighborhoods.

“I wanted it to be live each time,” so the students could communicate with her while they were doing their own walks.

Amid the rush to provide quality instruction remotely, educators are also realizing they need to find new ways to address the mental health needs of their students.

“In most schools, we rely on word of mouth to make sure kids don’t fall through the cracks,” said Brad Rathgeber, who heads One Schoolhouse, a nonprofit online school that works primarily with independent schools. “Online, you have to rely on other data, other red flags.”

In a one-week course, “Steady in the Storm,” One Schoolhouse is teaching administrators and counselors how to recognize those signs and develop a support team for students.

“We’re trying to lower the threshold for raising a flag,” said Lisa Damour, a clinical psychologist who helps teach the online course. For instance, a missed assignment may not mean much in a classroom where teachers interact with students in person. But online, turning in assignments is a key indicator of engagement. So missed work matters more.

“For teenagers, there’s a lot to be said for underreacting, but not right now,” said Dr. Damour, who writes the monthly Adolescence column for The Times and co-hosts the “Ask Lisa” podcast. The pandemic, she said, is a perfect storm for adolescents, stripping them of the structure and warmth they derive from school and wearing down their parents and teachers at the same time.

The key is to draw on the expertise of teachers, said Elizabeth Katz, One Schoolhouse’s assistant head for school partnerships, who facilitates the class with Dr. Damour. “Whether they’re online or in person, great teachers know when something is up with kids,” Ms. Katz said. 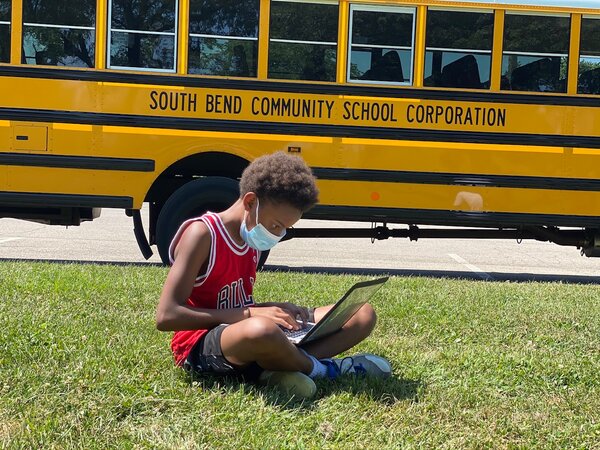 The reality that millions of Americans, largely in low-income and rural areas, lack access to high-speed internet, has been a growing crisis. But during the pandemic it became an education emergency as students struggled to learn from home.

One option school districts around the country have adopted is turning school buses into Wi-Fi hot spots.

One of the early adopters was South Bend Community School Corporation, a school district that serves about 17,000 students — 30 percent without high-speed internet, said Susan Guibert, a s district spokeswoman.

Even before the pandemic, the district started equipping buses with Wi-Fi so more students could connect more often.

The district had outfitted 20 school buses before the schools closed for remote learning in the spring; they added 22 more over the summer and just received a state grant to outfit 100 more, said René Sánchez, the district’s assistant superintendent for operations.

The latest on how schools are reopening amid the pandemic.