In the autumn of 1969, a five-year-old boy called Timothy Chappell, in his first term at school, had an idea. Could he, he asked his mum, go to class as a girl?

“My mother looked at me,” says Timothy – now Sophie-Grace – “and there was both terror and fury in her eyes. And she said to me: why?”

Chappell says her entire story is contained in that exchange: Timothy’s bemused but certain knowledge that he is in the wrong body; his mum’s understanding about that and her horror about what it could mean; and her anger at the little boy for naming it.

Of course, Timothy, who was raised in Bury, Lancashire, went to school as a boy, and spent his childhood as a boy. In time he married and had four children; but in 2014 he transitioned, and now lives as a woman. “For decades I’d hated myself, hidden who I was. But in the end it simply didn’t work, and the wonderful thing about transitioning was that I was able to finally stand up and say: this is who I truly am.”

The person she said that to most recently, in an open letter, was JK Rowling, who on 7 July signed a letter warning of the dangers of censoriousness and intolerance, after publishing a broadside in June on transgender issues. The irony, Chappell says, is that it was a line in Harry Potter that helped her decide to take the path she did.

We’re chatting on Skype and Chappell, at home in Dundee, is wearing a cream shirt and a matching string of beads. She looks comfortable and relaxed; you sense that her 50s have been a rebirth, and she’s enjoying life to the full. Now professor of philosophy at the Open University – the only openly transgender person to hold a UK chair in her subject, she believes – Chappell is also a Leverhulme Trust major research fellow, and is writing a book on epiphanies, which clearly has personal as well as academic resonances.

Although she has spent most of her life hiding her identity, it has been the driving force for her entire academic career. First, as the bright kid at school, then as a student at Oxford and continuing through a string of university lectureships, academia became a safe haven for Chappell.

“At school I put my energies into escaping into the worlds of Tolkien, Ursula Le Guin, poetry, and languages. I was always good as a linguist, and speaking another language gives you another identity, makes you another you,” she says. “I was desperate to escape, to be someone else, to be in another world where I could be me.”

School always felt, she confesses, “like facing the Taliban. I was gobby and smart but also vulnerable, and always the odd one out, always the kid who didn’t fit in”. When she got her scholarship to Magdalen College, Oxford, she cycled to school and ran along the corridor “trying to find a teacher so I could say, I told you so, I knew I could do this”.

University could have been the start of a different way of life, and for a few heady days when she first went there, she thought maybe it would be. “But then I dropped into the Christian Union, which was a safe environment where I didn’t have to face who I really was,” she remembers. “It was a form of self-policing – what I told myself was that the way I felt inside was wicked, evil, and incompatible with Christian life.”

Homer and Virgil became another safety zone – she was studying classics – and she still immerses herself in the Iliad on a daily basis. “It’s soul food, it feeds you; it makes it easier to deal with everyday struggles,” she says. 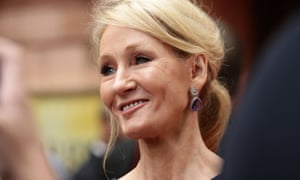 After marrying in 1988, and doing a PhD at Edinburgh, Chappell went back to Oxford to take up a junior research fellowship at Wolfson College, before moving to the University of East Anglia for a lectureship in philosophy, and then the University of Dundee via a short spell in Manchester. All this was threaded through with the births of four daughters, now aged between 20 and 27.

For many years, says Chappell, she buried her worries over her transgender feelings, but gradually they surfaced. Among other triggers was Harry Potter and the Philosopher’s Stone: “The mirror of Erised … struck me as a really heartbreaking image for my own condition,” she wrote in her letter to Rowling. “If I looked in the magic mirror and saw myself exactly as I most long to be, what would I see?”

The answer, she goes on, is “a woman, of course”. Which is why she was shocked at Rowling’s recent essay saying trans activism was dangerous to cis women.

In Chappell’s view, the argument about trans rights has become polarised partly because so many individuals on both sides have suffered deep trauma, often going back many years. Rowling wrote about the domestic abuse in her own life, and Chappell has trauma stretching back into her childhood.

But the bottom line, for Chappell, is this: “I think we can liken it to adoption. Trans women are like adoptive parents, who want to be accepted as being the same as biological parents. And they are accepted as such, despite the differences in how they became parents in the first place; and if society could do the same for trans women, we’d be in a better place.”

When it comes to the ongoing debate around the Gender Recognition Act, Chappell says her first reaction is exhaustion that the debate is still raging, combined with frustration. “The fear of trans women is a fear of the other – and that’s a fear we can trace back through other sorts of ‘other’ people at other moments in history.

“But we have to fight for our rights – and the thing people fail to realise is: who stands to gain from setting gay women and trans women against one another? The answer, of course, is the right: they want a society that’s misinformed, ignorant, terrified of otherness and divided, because that makes it easier for them to run it.”

In her own discipline, philosophy, the divisions are deeply felt. And yet, she believes, the group said to be opposed to increasing trans rights “are often a lot more negotiable than they appear to be”.

Sacked or silenced: academics say they are blocked from exploring trans issues

Chappell made the decision to begin living as a woman in 2014; her biggest happiness is that “my lovely family have all accepted it and are completely supportive”. Living with a transgender husband/father wasn’t always easy for them, she says. “We can be difficult people to live with; we’re often angry and frustrated. The problem is that there’s something about ourselves that even we don’t understand.”

She describes herself as “surgically curious”, but says she’s not had any interventions to change her body. “If it was possible to wave a wand and become a female in my body, I would. But the reality is, it’s major surgery, and there are real downsides to it.”

When she transitioned, Chappell was able to choose a new name for herself: Sophie, she says, for the Greek for wisdom; and Grace is her thanks for a gift she once couldn’t have imagined. The impression she gives is that she is enjoying everything about her new life, and even harsh words from one of her favourite authors can’t dent her spirits. The OU, she says, is “a fabulous gig”; she has had nothing but support from the university, especially around the time she was transitioning.

She also feels her work there has allowed her to put into action one of her deepest beliefs: that everyone deserves the chance to prove their potential. “As a society we throw far too many people on to the scrapheap,” she says. “But the OU is all about welcoming everyone. Coming here I felt a real sense of coming home, and it’s wonderful to help others find that here as well.”