Home » Education » ‘We’re always there for them’: is the tide turning against zero-tolerance in UK schools?

Sixth former Amy Fielding*, with her dreams of becoming a lawyer and her hard work for her A-levels, has the air of a determined young woman at the pinnacle of a successful school career. Yet only two years ago, her teachers say, Amy was a “challenging tearaway” doing all the things that in many schools would lead to permanent exclusion.

But Amy’s school, George Green’s in Tower Hamlets, didn’t exclude her. Its leadership team, determined to bring down exclusions rates, committed themselves to keeping her in school. She has benefited from a radically different approach to managing behaviour, based on understanding pupils’ personal circumstances and helping them to overcome the impact of traumatic experiences in early life, or outside school, that may be affecting their behaviour – such as abuse, neglect, domestic violence and family breakdown.

It is the polar opposite from some of the prevailing wisdom of the past decade, by which high-profile schools celebrate the virtues of a “zero tolerance” or no-excuses discipline policy, sometimes linked to a seemingly cruel school culture and high numbers of exclusions.

In recent years details have leaked out of very successful schools using approaches that reduced children to tears, with some students, according to England’s children’s commissioner, Anne Longfield, spending days in isolation booths. One Norfolk academy advised teachers to provide buckets for ill pupils to vomit in during lessons rather than leave the classroom – although it has since backtracked.

‘We batter them with kindness’: schools that reject super-strict values

George Green’s deputy head, Aidan McQuaid, came to the school knowing exclusions were too high and determined to address the problem through a supportive, rather than punitive, approach. Exclusion rates have since fallen, and pupils such as Amy given a second chance. And the sort of trauma-informed practice used at Amy’s school is a growing in popularity, as exclusion rates across the country remain stubbornly high and the impact of the Covid lockdown on pupils becomes clearer.

“Amy is a bright girl with aspirations, but she was putting herself in a vulnerable position because of her home life and significant safeguarding concerns,” says McQuaid. “We helped her understand that we weren’t going to give up on her, and explained what she could do differently by addressing the behaviour in a way she understood. We were in her corner and we refused to be another key support figure in her life to let her down.

“We have unwavering high expectations, and behaviour at George Green’s school is excellent. Each young person is different and may have super-challenging circumstances in their lives, so we need to find a balance. Some of these young people haven’t got the skills to manage behaviour because their brains haven’t developed in that way. Why are we punishing them for something they can’t control? Why would you exclude someone to effectively send them back to the place where they are most vulnerable and increase their risk of harm? That does not make sense.”

For Amy, switching to a different track was only possible because of her teachers’ confidence that keeping her in school would work. “I had a lot of stuff going on at home and outside of school which meant I found it hard to concentrate and didn’t care about school,” she says. “Support from teachers helped me to understand that, and I am so proud of myself that I didn’t get kicked out. I wouldn’t have been able to do that without my teachers.” 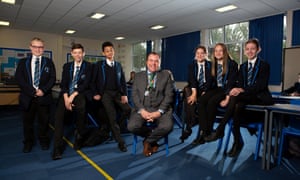 The method has attracted cynics, with accusations on social media that it is wishy washy and weak on poorly behaved pupils.

Dave Whitaker, director of learning at the Wellspring academy trust, has got used to the criticism. He is a longstanding practitioner of what he calls a “relational” approach to behaviour – “We batter them with kindness,” as he explains it. He believes the record of the trust’s 25 schools, mostly in areas of high deprivation, speaks for itself. All are good or outstanding and have never had any permanent exclusions. “We are very rigorous, have high standards and this work isn’t easy.”

His trust includes mainstream primary, secondary, alternative provision and specialist SEMH schools (for children with social, emotional and mental health needs). “What I call the behaviourist approach [zero tolerance and rewards and sanctions] only looks at behaviour, rather than deeper causes. We chucked it out the window 10 years ago and began to look at underlying emotions, rather than symptoms. Kindness, restorative practice and strong relationships underpin the culture of everything we do.”

Wellspring heads are evangelical about the benefits of the trauma-informed approach. One, Jason Thurley, says his school, the Beacon academy in Cleethorpes, Lincolnshire, is the opposite of a “comply or die school”. “We are giving children a second chance and we are oversubscribed and popular with parents, who have written at length to Ofsted to say how much they appreciate that. In areas of high deprivation, zero tolerance and high exclusions are not going to improve that community, which is what schools should be doing.”

A colleague, Ann Marie Oliver, associate principal of a specialist SEMH school, Springwell Leeds, describes the impact of the method on children who have had the sort of adverse childhood experiences trauma-informed practice is designed to tackle.

“Young people with physical disabilities are easy to see and understand. When young people have suffered from trauma and inconsistent care at a young age, they have strong emotional needs that are not so obvious to the eye. They don’t trust adults well because their needs have not met by the caregiver. For them, life is like being in shark-infested waters. We can’t see anything, but the smallest trigger could see their bodies go into crisis and automatic fight-or-flight mode.

“We had one young man who had been in 10 different foster homes over the last two years and lived in constant crisis, experiencing permanent rejection. Our response was ‘we are here for you, we are not going to reject you, we are going to keep you safe’.”

And this work appears to be in more demand than ever. Trauma Informed Schools UK, which offers teacher training in the method, is working with 3500 schools, including every school in Cornwall, and more than 20,000 teachers took part in its online “return to school” training after lockdown. Dr Margot Sunderland, co-director, says many heads are reporting a rise in the number of children whose behaviour has been affected by lockdown, possibly with a violent or depressed parent.

“People are hungry for a different vision of how to support these children. There is a growing awareness that this is a social justice issue. The evidence is very clear that without help in schools to address their unmet emotional needs, children who have adverse childhood experiences, including living in poverty, are more likely to develop long-term mental and physical health problems and/or get involved in crime. Until we start to address the emotional needs of traumatised children, little will change in society.”

Everyone welcome: inside the schools that haven’t expelled a child since 2013

Tackling these types of traumatic childhood experiences is a key strand of NHS Scotland’s work, and an Adverse Childhood Experiences hub has worked with more than 60% of schools in Wales. Some universities are including trauma-informed practice in their teacher training and the Department for Education’s recent guidance on mental health and behaviour for schools in England includes TISUK as a possible resource.

But headteachers such as Thurley believe a profound rebalancing of schools’ performance measures to value inclusion as well as results is needed. “Many heads are pressured to prioritise results over pupil wellbeing, which inevitably leads to exclusions to remove challenging pupils. Secondary schools need to put children and relationships first and data second,” he says.

Kiran Gill, founder of The Difference, which provides specialist mental health and trauma-informed practice training for senior leaders, such as McQuaid, believes a culture shift away from the no-excuses approach may be on the way.

“It’s clear that heads, trusts and local authorities want a systemic and solutions-focused response to pupils’ vulnerability and experience of trauma that goes beyond whack-a-mole policies which lead the students who need school most getting more and more marginalised,” she says.

“It’s early days, but increasing numbers of schools are curious about the neuroscience that’s been applied in mental health services. If we see more schools using interventions that improve pupil outcomes, reduce absenteeism and exclusion, I hope we will see that reflected in the narrative and accountability from Ofsted and the Department for Education.”

* Not her real name