The sprawling, 2,702-page bill includes historic investments in traditional projects as well as broadband expansion and funds for some climate projects. 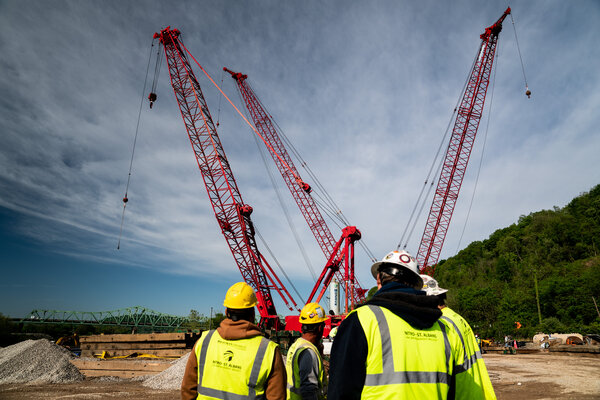 WASHINGTON — Amtrak would see its biggest infusion of money since its inception a half-century ago. Climate resilience programs would receive their largest burst of government spending ever. The nation’s power grid would be upgraded to the tune of $73 billion.

The sprawling, $1 trillion bill that the Senate took up on Monday — a 2,702-page bipartisan deal that is the product of months of negotiating and years of pent-up ambitions to repair the nation’s crumbling infrastructure — would amount to the most substantial government expenditure on the aging public works system since 2009.

It is also stuffed with pet projects and priorities that touch on nearly every facet of American life, including the most obscure, like a provision to allow blood transport vehicles to use highway car pool lanes to bypass traffic when fresh vials are on board and another to fully fund a federal grant program to promote “pollinator-friendly practices” near roads and highways. (Price tag for the latter: $2 million per year.)

The measure represents a crucial piece of President Biden’s economic agenda, and the agreement that gave rise to it was a major breakthrough in his quest for a bipartisan compromise. But it was also notable for the concessions Mr. Biden was forced to make to strike the deal, including less funding for clean energy projects, lead pipe replacement, transit and measures targeted to historically underserved communities.

Some of those provisions could be included in Democrats’ budget blueprint, expected to amount to $3.5 trillion, which they plan to take up after completing the infrastructure bill and push through unilaterally over Republican objections.

The infrastructure legislation, written by a group of 10 Republicans and Democrats, could still change in the coming days, as other senators eager to leave their imprint have a chance to offer proposals for changes. The Senate began considering amendments on Monday, with more possible in the coming days.

But the legislation marks a significant bipartisan compromise, including $550 billion in new funds and the renewal of an array of existing transportation and infrastructure programs otherwise slated to expire at the end of September.

For climate, a substantial investment that falls short of the administration’s goals.

As states confront yet another consecutive year of worsening national disasters, ranging from ice storms to wildfires, the measure includes billions of dollars to better prepare the country for the effects of global warming and the single largest federal investment in power transmission in history.

Much of the money intended to bolster the country’s ability to withstand extreme weather would go toward activities that are already underway, but which experts say the government needs to do more of as the threats from climate change increase. It also would support new approaches, including money for “next-generation water modeling activities” and flood mapping at the National Oceanic and Atmospheric Administration, which would also receive funds to predict wildfires.

The legislation also includes $73 billion to modernize the nation’s electricity grid, which energy analysts said would lay the groundwork for pivoting the nation off fossil fuels. But it contains only a fraction of the money Mr. Biden requested for major environmental initiatives and extends a lifeline to natural gas and nuclear energy, provisions that have angered House progressives.