The debate on Thursday night had long stretches of illuminating policy discussion on climate change, health care, the coronavirus, immigration and criminal and racial justice. 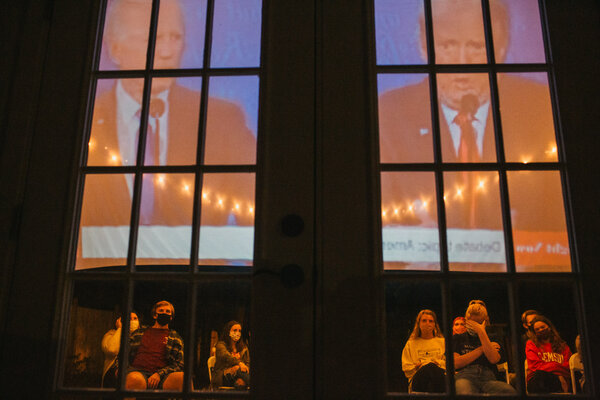 By Glenn Thrush and Matt Stevens

The 2020 presidential campaign has been many things. A measured back-and-forth over policy has not been one of them.

That was until Thursday night, when the presence of a mute button and the imperative of conducting a focused discussion led President Trump to debate between the lines.

If the churlish 90-minute session was not exactly measured, there were long stretches of illuminating policy discussion (punctuated by insults, invective and falsehoods) that defined Mr. Trump and Joseph R. Biden Jr. as standard-bearers for polarized parties.

Mr. Biden, the former vice president, addressed the questions put to him with more specificity, and pushed for a brawnier government response. Mr. Trump, whose diminished electoral strength rests on his handling of the economy, cast the biggest issues — the coronavirus and the environment, in particular — in quintessentially Republican, pro-business terms.

Here is a rundown of their main points of policy disagreement.

Mr. Trump, who has systematically dismantled environmental regulations put in place by former President Barack Obama, said he was committed to “the cleanest water, the cleanest air” — and defended his decision to exit the Paris climate accord, which would have, in his estimation, sacrificed “tens of millions of jobs, thousands and thousands of companies.”

He expressed unreserved support for fracking, a process for extracting natural gas, and questioned the practicality of alternative energy sources — especially wind power — over fossil fuels.

“We are energy independent. I know more about wind than you do,” he told Mr. Biden. “It is extremely expensive, kills all the birds, very intermittent, got a lot of problems, and they happen to make the windmills in Germany and China. And the fumes coming up to make these massive windmills is more than anything that we are talking about with natural gas.”

The former vice president rebutted Mr. Trump’s claim that he supports a universal ban on fracking backed by progressive Democrats, saying he had only committed to a ban on “fracking on federal land.”

Mr. Biden said he would take steps to confront environmental racism, and would protect people, especially in minority communities, who “live near chemical plants and refineries that pollute.”

Mr. Biden went on to make a more sweeping promise, linked to his intention to return the United States to emissions reductions mandated by the Paris Agreement. “I would transition from the oil industry, yes. That is a big statement,” he added. “Because the oil industry pollutes significantly, because it has to be replaced by renewable energy over time. Over time. I stopped giving the oil industry federal subsidies.” 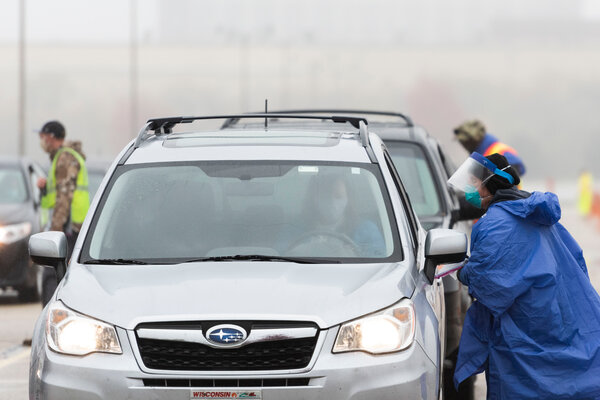 Mr. Trump again downplayed the severity of the recent surge of coronavirus cases.

Mr. Trump signaled his intention to keep up pressure on “Democratic governors” to fully reopen schools and businesses despite sharp increases in hospitalizations and a national daily death rate of about 1,000.

Mr. Trump did not call for social distancing or the use of facial coverings, despite evidence that such measures reduce the spread of the disease.

He made misleading claims about the speed with which a vaccine would be available to the public, but offered a less optimistic timeline when pressed by the moderator, Kristen Welker of NBC News.

“We have a vaccine that is ready, and it will be announced within weeks and it will be delivered,” said Mr. Trump, who has repeatedly contradicted his own scientific advisers who have said a widely distributed vaccine would not be available until early next year.

“Is that a guarantee?” Ms. Welker asked.

“No, it is not a guarantee, but it has a good chance,” he replied.

Mr. Biden reiterated his calls for the creation of a national standard, produced in conjunction with the scientific community, to determine the length and conditions of potential shutdowns to contain the spread of the virus in the months ahead.

“I will shut down the virus, and not the country,” said Mr. Biden, who did not rule out advising a national lockdown if the situation deteriorated.

“We need standards,” he added. “The standard is, if you have a reproduction rate in a community above a certain level, everybody says slow up. More social distancing. Do not open bars and gymnasiums — do not open until you get this under more control.”

Mr. Biden said the key to being able to “safely open” was providing businesses and local government with the “resources” to put in place safety measures.

“The expectation is we’ll have another 200,000 Americans dead between now and the end of the year,” he said. “If we just wore these masks, the president’s own advisers have told him, we could save 100,000 lives. And we’re in a circumstance where the president, thus far and still, has no plan. No comprehensive plan. What I would do is make sure we have everyone encouraged to wear a mask all the time.”

The Trump administration has long sought to repeal the Affordable Care Act, Mr. Obama’s signature piece of legislation. And on Thursday, Mr. Trump found himself in a rhetorical bind, seeking to simultaneously attack the health care law, while also acknowledging that if it is undone by the courts as he wishes, the broadly popular law will need to be replaced.

Mr. Trump bragged about having “terminated” the so-called individual mandate, a tax penalty for not buying insurance, which he called “the worst part of Obamacare.”

“What we’d like to do is terminate it,” Mr. Trump said of the health care law.

He argued that millions of people like the private insurance plans provided through their employers and that the option to retain that type of insurance should not be stripped away.

Mr. Biden laid out his plan in simple terms: “What I’m going to do is pass Obamacare with a public option,” a way to allow more people to receive government health insurance if they want it.