The G7 group of nations has agreed a “roadmap” for future engagement with the Taliban and will insist on the “safe passage” of people who want to leave Afghanistan beyond 31 August, Boris Johnson has said.

Speaking after a virtual G7 summit about the evacuation of people from Afghanistan, the prime minister said: “The number one condition we’re setting as G7 is that they have got to guarantee, right the way through, through August 31 and beyond, safe passage for those who want to come out.

“Some will say that they don’t accept that and some, I hope, will see the sense of that, because the G7 has very considerable leverage – economic, diplomatic and political.” 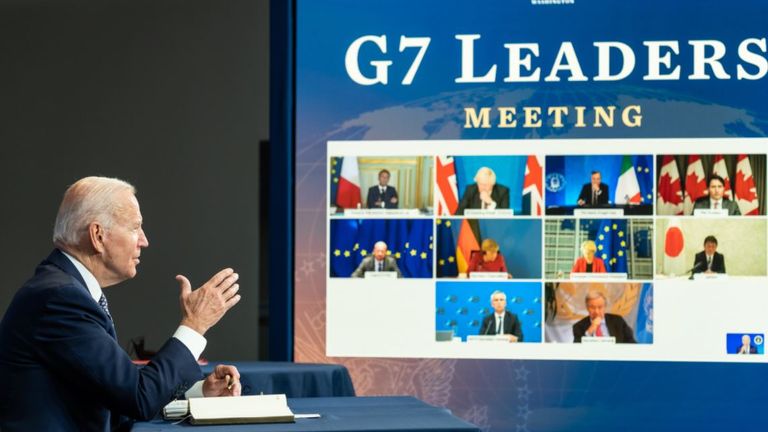 Mr Johnson was expected to use the talks to press US President Joe Biden to extend the deadline for pulling out his remaining troops from Afghanistan to allow evacuations to continue.

But US media reports say the president has decided not to extend the deadline.

The PM, who did not directly reference his extension call in a broadcast pool clip after the summit, said there had been “harrowing scenes” in Kabul in recent days and “the situation at the airport is not getting any better”.

He said the UK had managed to evacuate 9,000 people so far and “we’re confident we can get thousands more out”.

“We will go on right up until the last moment that we can,” Mr Johnson said.

The PM also said he was “totally realistic” about the Taliban and acknowledged that the current state of affairs was a “very difficult situation”.

But he insisted the G7 has “huge leverage” when engaging with the militant group.

“We want to help with the humanitarian crisis, the difficulties that people in Afghanistan, people fleeing Afghanistan, are going to experience,” Mr Johnson continued.

Speaking to Sky News earlier, Defence Secretary Ben Wallace conceded that an extension to the 31 August deadline was “unlikely”.

The Taliban has told Sky News that the end of the month was a “red line” and there would be “consequences” if that was extended.

This was reiterated by Taliban spokesman Zabihullah Mujahid on Tuesday, who said the US must complete evacuations by 31 August with “no extensions”.

“31 August is the time given and after that it’s something that is against the agreement,” he told a news conference.

“All people should be removed prior to that date.

“After that we do not allow them, it will not be allowed in our country, we will take a different stance.”

Since 14 August, a day after the Taliban took Kabul, 8,600 British nationals and Afghans who worked for the British over the past 20 years, as well as their families, have been flown out of the capital by British forces.

The defence secretary said there are enough aircraft and there is a steady flow of them coming into the airport, but the challenge is getting people there in the first place as they have to get through Taliban checkpoints between the city and the airport.

In a joint statement released by Downing Street, G7 leaders affirmed their commitment to the country, including “through a renewed humanitarian effort by the international community”.

The statement said they backed the UN in coordinating the immediate international humanitarian response in the region.

The Taliban swept to power earlier this month as the Afghan government collapsed amid the continuing withdrawal of the remaining Western military forces from the country.

The developments come almost 20 years after the invasion of Afghanistan was launched in the wake of the 9/11 attacks to oust the Taliban and prevent it from harbouring al Qaeda, the group behind the 2001 terror attack on the US.