Ms Foster was facing the threat of a no confidence letter being submitted by her party’s elected representatives, forcing a leadership challenge. In the face of the threat, she announced she was quitting her post and would be standing down as DUP leader on May 28 and as First Minister at the end of June.

“A short time ago I called the Party Chairman to inform him that I intend to step down,” Ms Foster said in a statement.

“It has been the privilege of my life to serve the people of Northern Ireland as their First Minister and to represent my home constituency of Fermanagh/South Tyrone.

“I first entered the Assembly in 2003 and undoubtedly the journey of the last 18 years has been memorable.

“There are many people who have helped and supported me throughout that period and I will always be grateful for the kindness and support shown to me by them.” 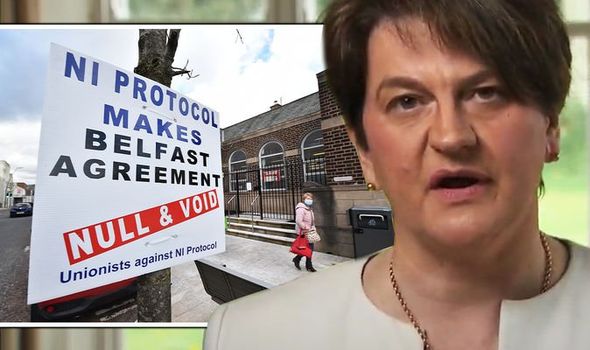 Ms Foster has left the DUP frustrated over the handling of the Brexit process, with the party facing anger from the wider loyalist and unionist community for the introduction of an Irish Sea border.

It is understood a significant number of DUP politicians had signed a letter of no confidence in the leader that was circulated among party MLAs, MPs and peers.

Poor recent polling numbers have exacerbated the discontent within the party faithful, who are mindful of next year’s looming Assembly election.

In her statement, she admitted “there have been ups and downs over the last five and a half years” of her time at the helm.

Ms Foster’s time at the helm has been turbulent. In 2017 she was caught up in a scandal surrounding Northern Ireland’s Renewable Heat Incentive.

The scheme cost the taxpayer hundreds of millions of pounds and led to the collapse of the power-sharing executive, after Sinn Fein pulled out of the governing body.

The Assembly was only reinstated last year.

Ms Foster’s time also saw a confidence and supply agreement brokered to prop up Theresa May’s Government in Westminster after the 2017 election.

The deal led to extra funding for Northern Ireland and gave the party significant influence over Brexit negotiations.

However, the eventual withdrawal agreement trade deal brokered with Boris Johnson was agreed upon despite widespread DUP concern.

In recent weeks there has been violence in Northern Ireland, with unionists taking to the streets to express their anger at the way the Northern Ireland Protocol has disrupted trade from Britain.

Under the terms of Mr Johnson’s withdrawal agreement, customs checks are required on some goods travelling across the Irish Sea.

In her resignation statement, Ms Foster urged those frustrated not to disrupt the peace and stoke “division”.

She said: “For almost five-and-a-half years I have been incredibly humbled to have the opportunity to lead the Democratic Unionist Party.

“I have sought to lead the Party and Northern Ireland away from division and towards a better path.

“The future of unionism and Northern Ireland will not be found in division, it will only be found in sharing this place we all are privileged to call home.”