Home » Politics » As Biden Pushes for Racial Equity in Vaccination, Data Is Lagging 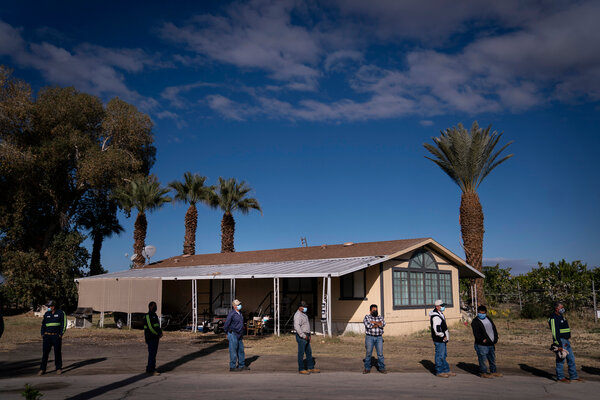 WASHINGTON — Federal health officials are struggling to gather accurate data on the race and ethnicity of people being vaccinated against the coronavirus, hampering President Biden’s push for racial equity in a pandemic that has taken a disproportionate toll on communities of color.

Mr. Biden has repeatedly said racial equity will be at the core of his administration’s coronavirus response. On Tuesday, White House officials announced a program to ship doses of vaccine directly to a network of federally funded clinics in underserved areas, beginning next week.

“Equity is our North Star here,” Dr. Marcella Nunez-Smith, a Yale professor who has been appointed by Mr. Biden to lead a Covid-19 equity task force, said during a White House virus team briefing. “This effort that focuses on allocation for community health centers really is about connecting with those hard-to-reach populations across the country.”

But so far, the federal government has gathered race and ethnicity data for just 52 percent of all vaccine recipients, according to a report issued last week by the Centers for Disease Control and Prevention. Public health experts say that while delivering vaccines directly to underserved communities is helpful, the absence of comprehensive data makes it impossible to know whether vaccine distribution is truly equitable, and how to correct disparities.

“I’m already very concerned that when we have a scarce resource that is first-come, first-served that we are going to have a situation where the privileged have access,” said Dr. Leana S. Wen, a former health commissioner for the city of Baltimore, adding, “We need to see what is happening in real time so that interventions can be directed accordingly.”

Dr. Marcus Plescia, chief medical officer of the Association of State and Territorial Health Officials, said the lack of data was alarming.

“The race and ethnicity data is important because we know who’s bearing the brunt of the pandemic, so there is a fairness and an empathy issue,” he said. “But there is also a disease control issue. If those are the groups most likely to get affected and die, those are the groups we need to make sure we are reaching with vaccine.”

There are various reasons for the gaps. Some states have laws barring the collection of race and ethnicity data, or policies limiting how such data may be shared. Sometimes the fields are left blank in forms that patients use to register for vaccination.

Dr. José Romero, the health secretary in Arkansas, said his state was missing race and ethnicity data for about a third of its vaccine recipients — despite his efforts to track that information.

“Shortly after we started getting into this vaccination, I started to ask for this data — I wanted it, we needed it, we were trying to get it and we were finding problems,” Dr. Romero, who is also chairman of the C.D.C.’s Advisory Committee on Immunization Practices, said in an interview. He said several state epidemiologists were at work “filling in the gaps by cross-referencing against secondary sources.”

Just as the pandemic has laid bare racial disparities in health care, it has exposed disparities in who is getting vaccinated. Black people and Latinos are far more likely than whites to get infected and die of Covid-19. And in cities across the country, including here in Washington, wealthy white residents are lining up to be vaccinated in low-income Latino and Black communities.

People in underserved neighborhoods face a variety of obstacles, experts say, including registration phone lines and websites that can take hours to navigate, and a lack of transportation or time off from jobs to get to appointments. And people of color, particularly Black people, are more likely to be hesitant about getting vaccinated, in light of the history of unethical medical research in the United States.

The community health centers program is aimed at closing that gap. It will be relatively small at first; the administration is allocating one million doses for just 250 of the nation’s so-called federally qualified health centers. There are nearly 1,400 centers operating 13,000 sites serving almost 30 million patients — about one in 11 Americans, according to the Health Resources and Services Administration, which finances the program.

What You Need to Know About the Vaccine Rollout