WASHINGTON — As the scandal over President Trump’s dealings with Ukraine unfolded in Washington last fall and prompted his impeachment, public corruption prosecutors in the Justice Department were stewing.

They had examined Mr. Trump’s actions and found no campaign finance violations, and were initially given the green light to pursue a potentially explosive inquiry into whether he had broken any other laws.

But Attorney General William P. Barr and other top officials held them back while Congress investigated the same matter during impeachment hearings. After the Senate acquitted the president, Mr. Barr in effect took the case away from the Public Integrity Section, sending all Ukraine-related inquiries to the U.S. attorney’s office in Brooklyn, according to six people familiar with the matter.

Compounding the prosecutors’ dissatisfaction was a stalled case around that time against a member of Mr. Trump’s cabinet, the former interior secretary Ryan Zinke. The deputy attorney general, Jeffrey A. Rosen, told the section’s lawyers that they needed a stronger case.

The details of their case are not public, making it difficult to evaluate its strength, but the response from Mr. Rosen exacerbated a sense inside the Public Integrity Section that top department officials would hinder investigations into Mr. Trump and his officials, according to several people familiar with the inquiry who spoke on condition of anonymity to discuss sensitive investigations.

The boiling frustration was a critical moment in the long-running tensions between the Public Integrity Section and the Trump administration that began under Attorney General Jeff Sessions. They spilled into the open this week Mr. Barr issued a memo authorizing prosecutors to investigate voter fraud claims before the results of the presidential race are certified, prompting the section’s lawyer who oversees voter fraud investigations, Richard Pilger, to step down from the post in protest.

“Having familiarized myself with the new policy and its ramifications,” Mr. Pilger wrote in an email to colleagues, “I must regretfully resign from my role as director of the Election Crimes Branch.”

The encounters were the latest example of Trump appointees at the top of the Justice Department overruling career prosecutors, drawing criticism that the administration was eroding the department’s typical separation from politics. Critics have also accused Mr. Barr of using the department to protect Mr. Trump and further his interests.

“All of these incidents coming to light show that Barr has been single-minded in his efforts to end the longstanding norm that the Justice Department be independent from politics,” said Vanita Gupta, a former department official under the Obama administration and now the head of the Leadership Conference on Civil and Human Rights.

The Public Integrity Section was created as a post-Watergate safeguard against abuses of power. It has secured bribery and extortion convictions against politicians as part of the Abscam scandal of the 1970s and early 1980s and a corruption conviction against the lobbyist Jack Abramoff in 2006.

Its reputation suffered with the botched prosecution of Senator Ted Stevens, Republican of Alaska, a case the department ultimately dropped.

The mistrust between lawyers in the Public Integrity Section and Trump officials began soon after Mr. Sessions became attorney general early in 2017.

He asked public corruption lawyers to brief him on high-profile investigations that they had declined to prosecute under the Obama administration and whether they could be reopened — including inquiries into Bill and Hillary Clinton’s foundation and an I.R.S. employee’s denial of tax-exempt status to conservative groups, according to two people with knowledge of the conversation.

Though public corruption staff members expressed views that Mr. Sessions’ questions were inappropriate, they were relieved when he did not push them to act after they explained why the cases had been closed, the people said. 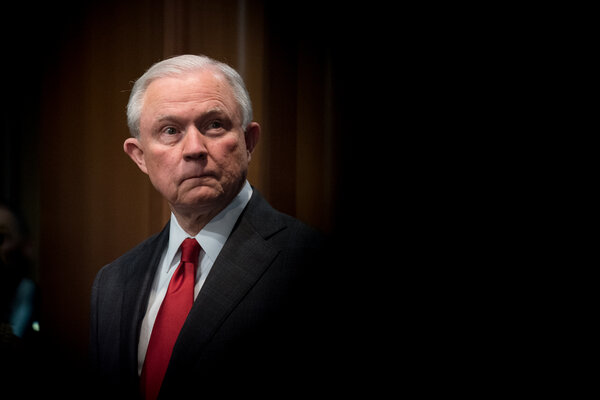 Mr. Sessions said in a statement that he did ask for briefings on “certain high-profile cases” that been heavily scrutinized, defending his requests as “entirely proper.”

Mr. Trump also took aim at the work of public corruption prosecutors in Washington and at U.S. attorney’s offices around the country, issuing pardons and commutations for people they had prosecuted, including Sheriff Joe Arpaio of Arizona, a staunch supporter of the president who had been convicted on contempt of court charges.

Mr. Barr’s confirmation hearing early last year did little to alleviate the prosecutors’ fears of continued interference. He testified that he had urged Mr. Sessions to end the department’s bribery and corruption prosecution of Senator Robert Menendez, Democrat of New Jersey, whose first trial had ended in a hung jury. The department did withdraw the case under Mr. Sessions.

He said that the case was similar to some he had taken issue with during his first stint as attorney general in the first Bush administration and that he “the prosecution was based on a fallacious theory” that could have long-term consequences for the department.

The anti-corruption lawyers’ fears about Mr. Barr were put to the test in August 2019 when the department learned that Mr. Trump had urged President Volodymyr Zelensky of Ukraine in a phone call to work with Mr. Barr to announce investigations that could help Mr. Trump politically.

Mr. Barr deterred two intelligence officials from forwarding a whistle-blower’s complaint about the phone call to Congress and said that the department would handle the criminal referral against Mr. Trump. The Public Integrity unit, which examines allegations of political corruption including campaign finance law violations, took on the matter.

Officials asked Mr. Pilger, who oversaw election-related crimes, and another lawyer to look into the matter, according to three people familiar with the inquiry. He and a colleague determined after about two weeks that Mr. Trump’s actions did not meet the threshold necessary to open an investigation into violations of campaign finance law, the subject of the referral.

“All relevant components of the department agreed with this legal conclusion, and the department has concluded the matter,” the department said in a statement in September 2019. Officials said at the time that the campaign finance determination did not preclude further investigatory work on any other potential issues.

Mr. Trump’s allies seized on that determination on the narrow question of campaign finance law to declare his innocence. But lawyers in the Public Integrity section had not examined any other potential violations, according to five people familiar with the section’s work.

It was not clear whether that office pursued an inquiry into Mr. Trump.

Their swelling frustration was a test for the new head of the section, Corey Amundson, who had joined from the department’s Office of Professional Responsibility that September.

At the start of his tenure, Mr. Amundson told staff members that he had prewritten a resignation letter that he would submit if he felt he was asked to act unethically. He soothed tempers in the Ukraine matter in part by agreeing that the reconstructed transcript of the call issued by the White House left open questions about whether Mr. Trump had violated other statutes, according to four people with knowledge of the discussions.

He said that more investigation was warranted and notified his boss, Brian A. Benczkowski, then the head of the criminal division, about the tensions over the Ukraine call. Mr. Benczkowski agreed that further inquiry would be appropriate, the people said.

But once Congress began its impeachment inquiry, top Justice Department officials decided that an investigation of Mr. Trump had been overtaken by the events of impeachment, according to two people briefed on the matter. Then any inquiry into the call was consolidated with other Ukraine matters at the beginning of this year under the Brooklyn U.S. attorney’s office. Under the Trump administration, the department has often moved politically fraught work to prosecutors far from Washington. Those investigations have rarely resulted in charges.

Around that time, the deputy attorney general, Jeffrey A. Rosen, also told prosecutors in the section that they could not proceed with charges against Mr. Zinke of making false statements to federal investigators, a case that stemmed from a referral from the Interior Department inspector general, according to three people familiar with the case.

Mr. Rosen expressed doubts about the strength of the case and sought a stronger prosecution. The prosecutors agreed to work further, and the inquiry has not been officially closed, according to people familiar with the matter.

The presidential race reignited the tensions in the weeks leading up the election. Mr. Barr told leaders in the criminal division, which oversees the Public Integrity Section, that he wanted to allow prosecutors to look into voter fraud allegations before the results of the presidential race had been certified, according to two people briefed on his conversations.

Such a move would not only contravene a longstanding department policy intended to keep the department from inadvertently affecting the results of the race, but it would also allow federal prosecutors to bypass the Public Integrity Section and Mr. Pilger, who had long been assigned to approve requests to conduct election fraud investigations that fell outside of the department’s guidelines.

Mr. Barr had a fundamental disagreement with Mr. Pilger over the original policy, which presumed that any overt investigative steps like questioning witnesses could harm an election. Mr. Barr had argued that fraud allegations should be reviewed on a case-by-case basis, according to a department official.

The head of the criminal division, Brian Rabbitt, Mr. Barr’s former chief of staff, pushed back on the attorney general’s proposal. He and his staff considered the matter resolved when Election Day passed without Mr. Barr issuing any edict.

But the attorney general concluded it was ultimately his call, the department official said. He made it on Monday, saying that with all the votes cast it was proper for prosecutors to look into claims of voting irregularities.

The move stunned Mr. Rabbitt, Mr. Amundson, Mr. Pilger and others inside the criminal division, according four people who spoke with them. Mr. Pilger stepped down from his post within hours for a nonsupervisory role at the department.

Some colleagues expressed hope that his protest would send a message to the public and to other officials that they did not condone Mr. Barr’s memo. They told others that they feared he had set the stage for a U.S. attorney in a battleground state to announce an inquiry or take investigative steps that advance Mr. Trump’s debunked narrative that the election was stolen.