BBC reporter Robert Hall arrived in Jersey to speak with protesters and monitor the situation as more French vessels join the demonstration. While initially it was believed the ships would blockade St Helier’s harbour, the ships have moved out further to allow other freight ships to move in and out of the island’s waters. Mr Hall added the situation is not as tense as many first believed as fishermen have stated all they want to do is to have a response from the Jersey government.

Speaking to BBC Breakfast on Thursday morning, Mr Hall said: “The fleet are now anchored about half a mile off St Helier – they’ve moved to allow a vessel out.

“They say they don’t want to make things worse but they do want talks as soon as possible.”

He added: “The French initially moved down to St Helier’s harbour mouth and blocked it.

“There was some discussion over the radio with the Jersey harbour authorities and as a result the French fleet – still about 60 or 70 of them have moved away from the harbour to allow a freight ship to leave St Helier.

“They say they are going to remain here while they await a reaction or some sort of response from the Jersey government.

“They say if the Jersey license system continues as it is currently planned then it could be 80 percent of fishing towns in Normandy might disappear completely.” 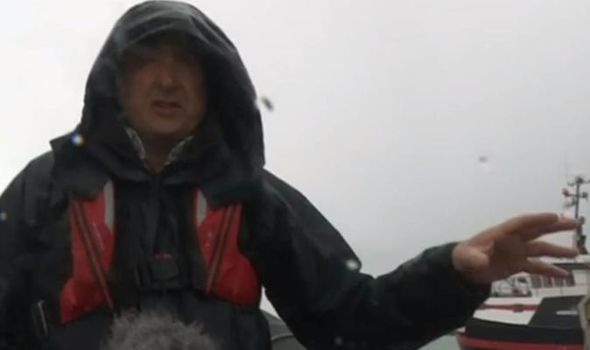