Home » Politics » Behind in Polls, Republicans See a Silver Lining in Voter Registrations

Democrats lead in overall numbers, as well as early voting, but voter registration gains in three critical states have given Republicans a cause for hope. 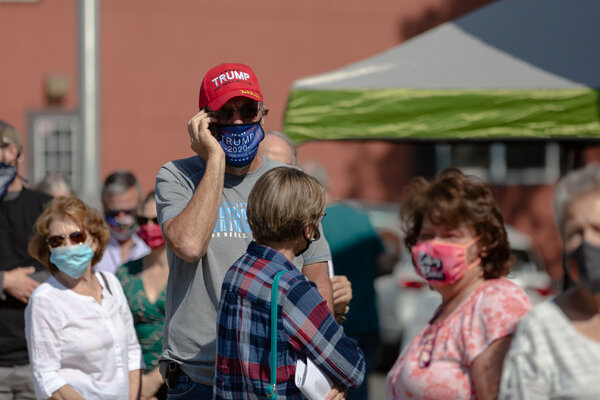 With President Trump trailing in public polls in nearly every major battleground state, Republicans are pointing to what they see as more promising data: Updated voter registration tallies show that Republicans have narrowed the gap with Democrats in three critical states.

As the presidential campaign heads into its final weeks, Republicans hope that gains in voter registration in the three states — Florida, North Carolina and Pennsylvania — and heavy turnout by those new party members might just be enough to propel Mr. Trump to a second term.

“The tremendous voter registration gain by the Republicans is the secret weapon that will make the difference for the Republicans in 2020,” said Dee Stewart, a Republican political consultant in North Carolina.

Overall, Democrats retain a lead in total registrations in those three states and hold a significant advantage in early turnout. Democrats also have picked up voters in Arizona, a state Mr. Trump won by 91,000 votes in 2016 but where Joseph R. Biden Jr., the Democratic presidential nominee, now leads in the polls.

The Trump-Biden contest this fall may be driven less by incremental changes in registration than by who turns out to vote, and how much they want the president to have a second term or not. And the difference of a point or two in voter registration only makes a difference in a close race.

Analyzing voter registration — and how it might affect the outcome of the looming election — is also complicated by the fact that a number of states permit same-day voter registration. In addition, at least six battleground states — Georgia, Michigan, Minnesota, Ohio, Texas and Wisconsin — do not break down voter registration by party, though Democrats point to some perceived gains there.

In Georgia, for example, of the 800,000 voters who have registered since 2018, 49 percent are people of color, according to the organization Fair Fight, which was founded by Stacey Abrams, a Democrat who narrowly lost the race for governor in the state in 2018.

In their optimism regarding the registration data, Republicans point first to Florida, the largest battleground state, which has 29 electoral votes.