A proposed rule could save the Deferred Action for Childhood Arrivals program, which a federal judge in Texas found unlawful in July. 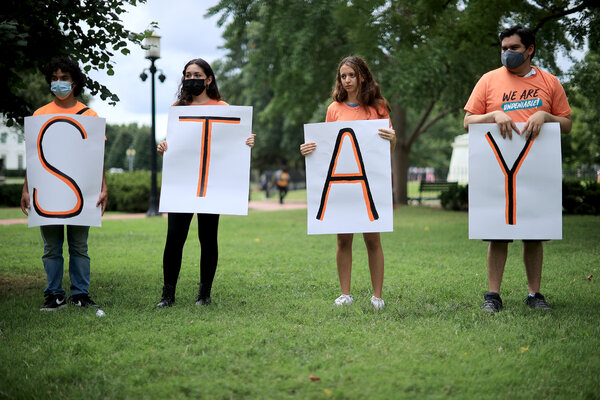 By Miriam Jordan and Eileen Sullivan

WASHINGTON — The Biden administration plans to publish a proposed rule on Tuesday in hopes of preserving Deferred Action for Childhood Arrivals, or DACA, a program that has protected hundreds of thousands of undocumented young adults from deportation and allowed them to legally work in the United States.

The proposal is especially important given a recent decision by the Senate parliamentarian to not allow immigration provisions to be included in a sprawling budget bill, which Democrats had hoped would put DACA recipients on a path to citizenship.

The new rule, to be published in The Federal Register, would go into effect after the administration considers public input during a 60-day comment period. It would protect some 700,000 undocumented people brought to the United States as children from being deported or losing their work permits, even if Congress does not pass comprehensive immigration reform.

For years, DACA beneficiaries, often called Dreamers, have been uncertain about their future as the program has been canceled, reinstated and partly rolled back by court rulings and administrative actions. The Trump administration tried to end it, and several states, led by Texas, have also challenged its legality.