(Reuters) – Joe Biden’s presidential campaign installed a television studio in his basement over the weekend so the Democratic front-runner could demand bolder action from President Donald Trump on the coronavirus crisis and speak directly to the country. 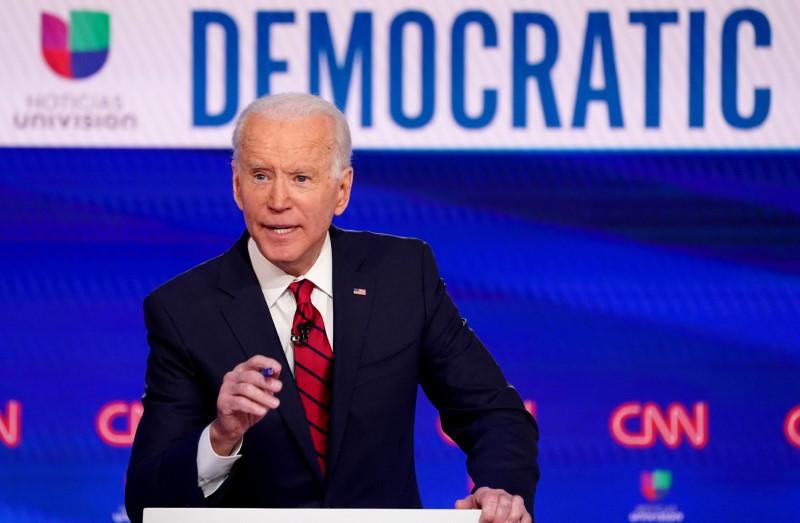 It was yet another sign of the upheaval the global pandemic has wrought on a presidential campaign that just a week ago seemed to be moving full steam toward a Nov. 3 general election matchup between Biden and Trump.

Instead of the former vice president wrapping up the Democratic nomination, the coronavirus has taken attention away from the 2020 White House race and threatens to blunt Biden’s momentum by postponing state nominating elections and indefinitely halting in-person campaign events and fundraisers.

By contrast, Trump, who initially played down the virus’ impact, has used his daily televised White House briefings on the crisis to project optimism about getting the pandemic under control and grab media attention.

The turn of events frustrates Democrats who were eager to move past the nominating contest’s intraparty fighting. It is forcing the Biden campaign to recalibrate quickly to find new ways to connect with voters and donors and compete for attention as Trump leads the national response to the crisis.

Before the spreading respiratory virus upended American life by shutting down a large swath of the economy and curtailing social activity, Biden’s crowds were growing larger. Donors once cool to his candidacy rushed to make contributions.

He had hired a new campaign manager and was thinking about running mates. With decisive wins in a series of state Democratic nominating contests through last Tuesday, he expanded his lead over his lone remaining competitor, U.S. Senator Bernie Sanders.

Although he was holding calls with reporters, donors and advisers from his Delaware home, Biden’s lack of a public event for several days meant he all but disappeared from television. Internet memes questioned his whereabouts.

After seeking advice from donors on how to improve Biden’s digital presence in light of the coronavirus, the campaign is responding to their feedback by boosting Biden’s appearances from his in-house studio.

Biden’s name recognition from decades in public life will help him stay relevant in the absence of regular TV coverage, Rendell said.

Several of the Biden campaign’s videos in recent days, including Monday’s speech, were widely viewed online. Still, there were growing pains. On Monday, Biden looked off to the side of the camera for a cue to start speaking and then gestured with his hand during the speech in apparent guidance to a teleprompter operator.

Biden’s campaign also is reaching out to consultants and other fundraising experts to seek ideas on how to raise money while people are stuck in their homes, according to a person familiar with the efforts.

One idea being considered is “relational organizing,” a technique that Biden’s onetime rival Pete Buttigieg relied on with some success during normal times, the person said. The plan relies on supporters to host virtual fundraisers, hoping to collect small-dollar donations from friends, neighbors and other people in their network.

“We’re trying to figure out strategies and how you keep people engaged in the process without offending them,” said one Biden fundraiser not authorized to speak for the campaign. “A lot of people are in shock.”

Biden’s campaign is also in talks with third parties about how it can expand its digital operations, according to another person familiar with the matter.

“You’re going to be seeing a lot more of me on television and on – excuse me, teleconferencing – as well as online,” Biden told donors during a call on Sunday.

Democratic supporters have stepped up their donations to Biden in recent weeks as it appeared increasingly likely he would be the party’s nominee. Biden has phoned or teleconferenced into three events with donors since Friday.

Biden supporter and former Paramount Pictures boss Sherry Lansing said all kinds of fundraising were going to become more difficult as people focus their charitable donations on coronavirus causes and as the faltering economy cuts into incomes.

Lansing said something would be lost by not having in-person events, such as the fundraiser she hosted at her Bel Air, California, home earlier this month, where dozens lined up to take pictures with Biden.

“When he shook their hands, he had something personal to say to them whether he knew them or not,” she said. “There’s nothing that can replace face-to-face human contact.”