WASHINGTON — As mayor of South Bend, Ind., Pete Buttigieg grew to view asphalt as his enemy. As governor of Michigan, Jennifer M. Granholm faced a Republican-led legislature intent on blocking her biggest infrastructure ambitions. As governor of Rhode Island, Gina Raimondo overcame early opposition to an infrastructure plan from moderate members of her own party.

All three are part of a group of five cabinet secretaries President Biden has selected to serve as the administration’s salespeople for the American Jobs Plan, which seeks to pour trillions of dollars into infrastructure and other new government programs.

“Every square foot of asphalt, from a mayor’s perspective, is a square foot you have to pay forever to maintain, to resurface, to fill potholes on it,” Mr. Buttigieg, now the transportation secretary, said in a recent interview. “There were roads that maybe saw one car every few minutes that were paved wide enough for four cars side by side. There’s a cost to maintaining that.”

The lessons in asphalt Mr. Buttigieg learned in Indiana informed how he is trying to sell Mr. Biden’s infrastructure plan across the country today. “The point is we design for the future and ask what we want to build, instead of redoing everything we’ve done in the past,” he said. In terms of making the case for the ambitious plan, he said, “there’s nothing like being able to say, ‘Here’s how we faced it in my community.’”

Along with Mr. Buttigieg and Ms. Granholm, the energy secretary, and Ms. Raimondo, the commerce secretary, the group includes Marcia L. Fudge, the housing and urban development secretary, and Martin J. Walsh, the labor secretary.

Their job is to push the infrastructure plan on Capitol Hill and across the country with voters. They were picked because they lead agencies that oversee the bulk of the proposals in the jobs plan, which covers broadband, public housing, climate change and job training, in addition to roads and bridges.

But they are also former mayors or governors who have tackled the challenges at the local level that Mr. Biden now faces nationwide.

In fact, they all tried — and sometimes failed — to sell their own infrastructure plans, either to a recalcitrant legislature or to resistant members of their own party.

As governor of Michigan, Ms. Granholm brought together business and labor leaders to try to pass a $1 billion investment in the state’s infrastructure, but failed in the face of a Republican-led legislature. Mr. Buttigieg learned the hard way that a Smart Streets program would take months of community outreach to Black business owners if he did not want to be accused of aiding gentrification. In Rhode Island, Ms. Raimondo oversaw a state ranked by CNBC as having the worst infrastructure in the United States in 2019, and had to negotiate with moderate Democrats on a plan that had big-rig trucks pay tolls to repair crumbling bridges. 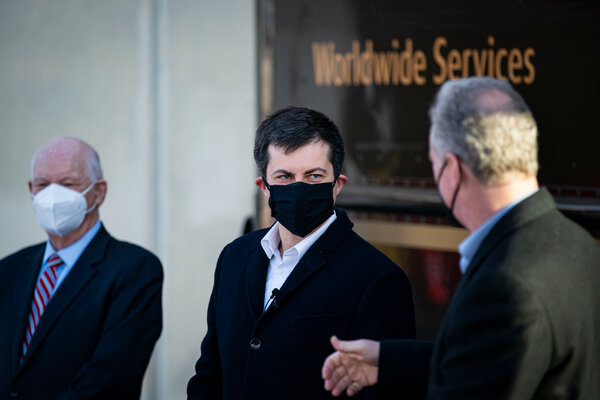 “When you work at the local level, you work in the realm of time frames, budgets and completions,” said Henry Cisneros, a former mayor of San Antonio who served as the housing and urban development secretary under President Bill Clinton. In Washington, he said, a discussion of an infrastructure bill can too often center on authorizations and appropriations.

“When you have people who have seen it all the way through, people in Washington are always surprised by the difference in the mind-set,” he added.

Take Ms. Fudge, who served as the mayor of Warrensville Heights, Ohio, from 2000 to 2008. “If I was working in my yard, it was nothing to someone to pull in and talk about what they did or didn’t like in the city,” she said. “We talk to people in a different way.”

As governor of Michigan from 2003 to 2011, Ms. Granholm had big ambitions to fix a state that had some of the worst roads in the country. She proposed nearly $1 billion for infrastructure improvements, to be paid for by debt refinanced at lower interest rates.

“Obviously no one wants to raise taxes ever,” Ms. Granholm said. “Anyone who is elected can tell you that.”

In recent days, she has been meeting with Republican lawmakers to discuss the 28 percent corporate tax rate that Mr. Biden has proposed — but has also said he would be open to compromise. “We understand we needed to have a competitive rate,” Ms. Granholm said. “There’s wiggle room.”

Infrastructure experts in the state said the political landscape made big change impossible.

“Her challenges were that she had a full Republican control of the legislature while she was in office,” said Mike Nystrom, the executive vice president of the Michigan Infrastructure & Transportation Association. “She did get some stuff done.” But, he said, “we did not get a long-term funding solution passed.”

That defeat, coupled with the challenge of leading a state through a global recession and the bankruptcy of the auto industry, taught Ms. Granholm the importance of having a federal partner.

“States bring a knife to a gunfight in this,” she said, “while other countries are clearly investing in their infrastructure, in their training of people. Michigan going up against China, who do you think is going to win? Having a federal partner in this is everything.”

In Rhode Island, Ms. Raimondo got a measure of help from the federal government when Mr. Biden, in a visit as vice president, joked that one of the bridges was so old that “you’ve had Lincoln Logs holding the damn thing up.” In getting her plan passed she weathered a lawsuit from a trucking association and criticism from the business community. The first time she put the plan forward, “it just died an unceremonious death,” she said.

“It was very similar, because the legislature at the time said, ‘Yes, we have to fix our roads and bridges; yes, we know bridges are going to fall apart,’” she said, but some officials did not want to raise any taxes or tolls. “So we just stayed at the table and said, ‘Give up how would you pay for it?’”

The final version of the plan called for less borrowing and lower tolls on the trucks. Marc Dunkelman, a fellow at Brown University who focuses on the architecture of U.S. communities, said the saga showed that Ms. Raimondo was “able to talk credibility to both Elizabeth Warren and Joe Manchin.”

“That will be a real benefit,” he said.

As labor secretary, Mr. Walsh shares responsibility for ensuring diverse hiring for the millions of jobs the White House says will be generated by Mr. Biden’s plan. In Boston, where Mr. Walsh served as mayor from 2014 to 2021, a federal civil rights complaint filed against the city found that 1.2 percent of more than $2 billion in public contracts went to Black or Hispanic businesses over a period of five years. Mr. Walsh responded by signing an executive order allocating 25 percent of city funding to businesses owned by people of color and women.

This year, the city government also canceled a roughly $25 million project that would have rebuilt Melnea Cass Boulevard in Roxbury, after residents opposed the removal of more than 100 trees in the mostly Black community.

“I believe Secretary Walsh really wants the best,” said Stacy Thompson, the executive director of LivableStreets, a transportation advocacy organization based in Cambridge, Mass. “I believe Pete Buttigieg really wants the best. It doesn’t mean they always got it right. In some cases they got it really wrong. And I hope they learned from it. We really need them to learn from it.”

Mr. Walsh acknowledged that residents described the plan as “environmental racism” and said part of the problem was that he had inherited a project that had run on for a decade.

“One of the things we’ll be talking about is that as this money gets approved, there’s shovel-ready projects,” Mr. Walsh said. “This other project in Boston dragged on 10 years. It’s way too long.”

The salespeople have their work cut out for them. But the less visible work at the local level is now generating grist for their conversations with stakeholders and lawmakers.

Mr. Buttigieg said he was constantly referring to his executive experience when meeting with Republican lawmakers on Capitol Hill, where he claims he has had productive conversations filled with good will despite public criticism of the infrastructure plan. In return, lawmakers tell him of their own experiences.

“Susan Collins shared a story about a community with a memorial for lives of fishermen that were lost,” he said. “She talked about building a breakwater with help from federal funds that has gone to save a lot lives. She’s sharing why she knows these things are important to her community.”