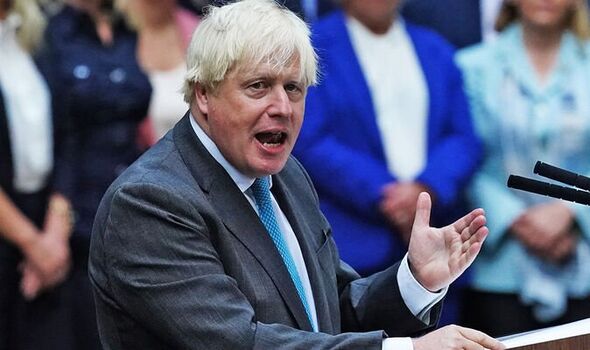 Boris Johnson is “definitely standing” in the Tory leadership contest and has more than 100 MP backers, according to an insider, with his camp confident “he will win with the numbers” in a battle against Rishi Sunak. A minister on the organising team for the former Prime Minister told Express.co.uk: “He will win with the members. It’s up to Rishi to make a deal now. We have the numbers, it’s a matter of ticking of the spreadsheet for tomorrow but that is what Jacob [Rees-Mogg] was able to announce Boris is definitely standing. He will not back out now.”

This comes with Mr Sunak confirming he is standing in the Tory leadership race to replace Liz Truss as Prime Minister.

The former Chancellor said in a statement posted on Twitter: “The United Kingdom is a great country but we face a profound economic crisis,” he said on Twitter.

“That’s why I am standing to be leader of the Conservative Party and your next prime minister.”

He added: “There will be integrity, professionalism and accountability at every level of the government I lead and I will work day in and day out to get the job done. I am asking you for the opportunity to help fix our problems.”

On Saturday, Mr Johnson and Mr Sunak reportedly held late-night talks over a possible power sharing deal, but it is understood that meeting ended in stalemate.

Mr Sunak was defeated by Ms Truss in the race to replace Mr Johnson in September after losing an election held by members of the Conservative party across the country.

But even before he declared today, he had received more support from Conservative lawmakers than his rivals – former Defence Minister Penny Mordaunt and Mr Johnson.

In July, Mr Sunak quit the Government after helping to trigger a rebellion that brought the Prime Minister down.