The Prime Minister waded in amid fury that his predecessor’s image was hidden behind wooden hoardings for its own protection. London’s Mayor Sadiq Khan took the controversial decision to cover up Sir Winston over fears that he may be targeted by anti-racism activists today. Earlier this week vandals daubed the bronze sculpture with graffiti, while other famous busts that are linked to historical racism or the slave trade featured on a “hit-list” drawn up by activists.

The threat to them was heightened when Black Lives Matter, which is behind the surge in protests across the world, planned a protest in central London today. It has been called off but other groups – including far-Right thugs – still plan to take to the streets.

As fears of violence and vandalism grew, Mr Johnson hit out at the “absurd and shameful” bid to tarnish Sir Winston’s legacy of triumph over fascism because of his outdated views.

The Prime Minister pointed out that Sir Winston saved democracy by protecting Europe from the Nazis in the Second World War. Mr Johnson tweeted: “The statue of Winston Churchill in Parliament Square is a permanent reminder of his achievement in saving this country – and the whole of Europe – from a fascist and racist tyranny.

“It is absurd and shameful that this national monument should today be at risk of attack by violent protesters.

“Yes, he sometimes expressed opinions that were and are unacceptable to us today, but he was a hero, and he fully deserves his memorial. “We cannot now try to edit or censor our past. We cannot pretend to have a different history.

“The statues in our cities and towns were put up by previous generations. They had different perspectives, different understandings of right and wrong. 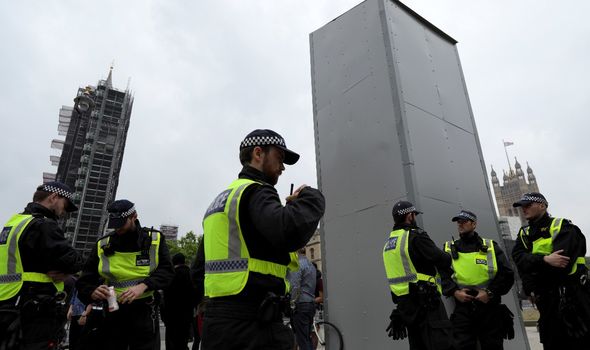 “But those statues teach us about our past, with all its faults. “To tear them down would be to lie about our history and impoverish the education of generations to come.”

Later in the day, Mr Johnson urged people not to join the protests or to use their anger as an excuse to the target the police.

The global wave of protests was sparked by the death of George Floyd, an African-American, while he was in US custody last month.

Mr Johnson said of the UK protests: “You’ve got a situation in which the statue of Winston Churchill, who is a national hero, has had to be boarded up for fear of violent attack. That to me is both absurd and wrong.

“You should not have a situation in which people, who are protesting on one basis, are violently attacking the police or public property.” He added: “What has happened with these demonstrations is that a tiny minority – actually it is a growing minority, unfortunately – have hijacked them.

“They are using them as a pretext to attack the police, to cause violence and to cause damage to public property. 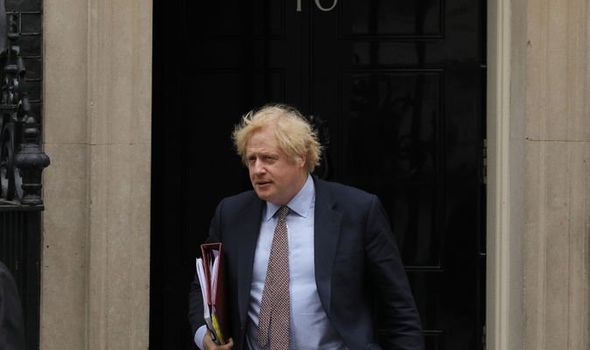 “So, unfortunately, my message to everybody is that, for all sorts of reasons, they should not go to these demonstrations.”

Meanwhile, Tory MP Andrew Bridgen called for Mr Khan’s resignation and accused him of giving in to the mob by ordering Sir Winston’s memorial to be covered.

Mr Bridgen tweeted: “Churchill’s famous words ‘we will never surrender’ is completely undermined by London Mayor Sadiq Khan’s appeasement of the mob. “It’s a national humiliation. How on earth can he justify this cowardice in face of a mob.”

Brexit Party chairman Richard Tice said of the covering-up: “This is wrong, wrong, wrong. Winston Churchill must reappear here in Parliament square, the mother of democracy, immediately.” Tory MP Bob Blackman called the boarding up of statues an “absolute disgrace” and branded Mr Khan the “do nothing Mayor” who “lost control of our streets”.

Other MPs expressed dismay that the Cenotaph – a war memorial erected in Whitehall after the First World War – was also boarded up. Statues of King James II and Nelson Mandela have been hidden from public view too.

Jacob Young, Conservative MP for Redcar, said on Twitter it was “so sad that rioters can’t be trusted not to attack the Cenotaph, so much so that they now feel the need to board it up”. Alexander Stafford, Tory MP for Rother Valley, said it was a “sad day” that “those that want to attack this symbol of freedom and liberty make me deeply ashamed”. 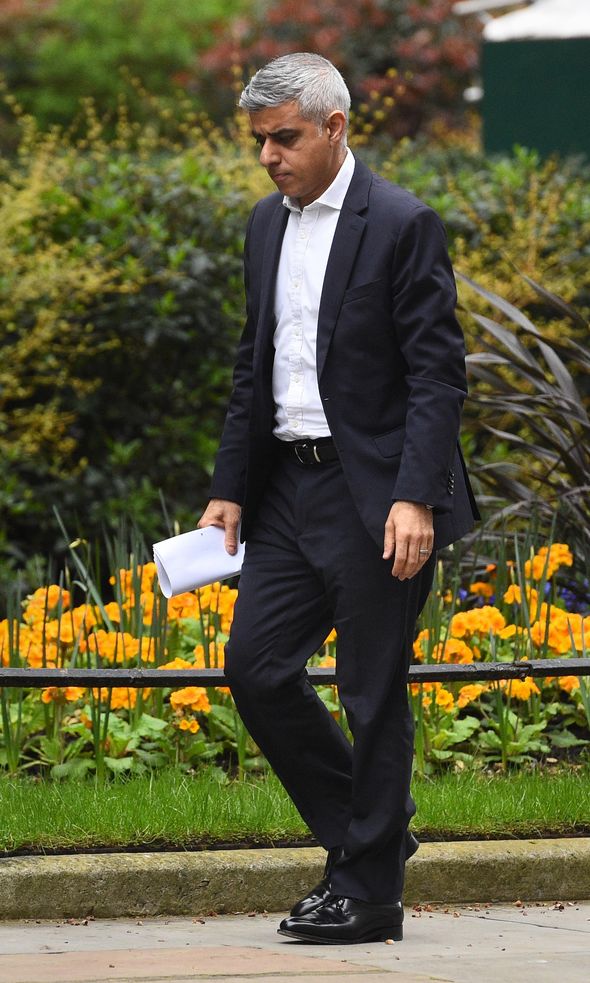 Sir Winston’s statue came into the firing line after weeks of outrage over Mr Floyd’s death at the hands of white Minneapolis policeman Derek Chauvin.

Mr Floyd, 46, was filmed gasping “I can’t breathe” as Chauvin pushed a knee into his neck for nearly nine minutes. Chauvin has since been charged with murder. In the furore that followed in the UK, activists from pressure group Black Lives Matter toppled a statue of slave merchant Edward Colston into Bristol’s city harbour.

Historians accept Sir Winston had outdated views. Controversies include defending the idea of a “higher grade race” and advocating poison gas against Kurds and Afghans. But academics stress that Churchill’s views were not “particularly unique” for his time or class, bearing in mind he was born in 1874 to one of Britain’s most aristocratic families.

Yesterday Mr Khan said he was protecting the monuments and called for people to avoid central London this weekend.

He said: “This moment must be a catalyst for systemic, lasting change to tackle the racism and inequalities that black people face today, in this country and elsewhere. Extreme far-Right groups, who advocate hatred and division are planning counter-protests, which means that disorder risk is high. Staying home and ignoring them is the best response.”

The far-right campaign to protect the monuments has been backed by former English Defence League leader Tommy Robinson.

Scotland Yard Commander Bas Javid said both sets of activists would be dealt with equally.