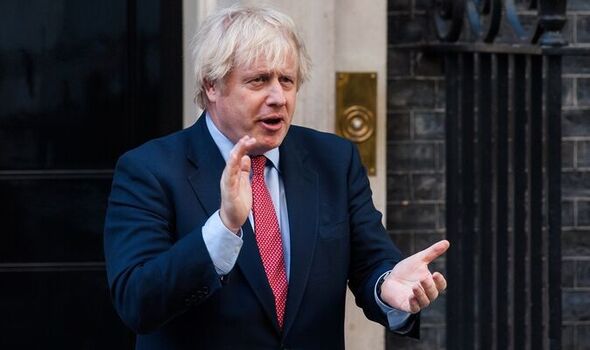 Supporters of Mr Johnson have condemned plotting by MPs who want him out, insisting he will stay in post even if he wins a confidence motion by just a single vote. Tory rebels are reported to be planning a “vote strike” to force Mr Johnson to quit. It is claimed they are threatening to obstruct parliamentary votes even if Mr Johnson survives a vote of no confidence.

And there is mounting speculation that such a vote could be held as early as Wednesday.

Mr Johnson is expected to win the 180 votes needed to keep him in office. However, critics have warned that anything less that a clear win would leave them with no option other than refusing to vote on key Government Bills.

However, Mr Johnson has come out fighting, claiming that “record numbers” of doctors and nurses are in place and the NHS now has “unprecedented” funding. A series of announcements are expected this week to show how the “Covid backlog” is being tackled, amid severe concern about missed diagnoses, treatments and operations.

He said: “The pandemic put unparalleled pressure on our NHS, but we are making excellent progress towards our goal of tackling the Covid backlogs.

“With record numbers of doctors and nurses, and a system backed by unprecedented government funding, we will continue to make sure patients receive world-class care whenever they need it.

“This week we will update on how we are driving down waiting lists and delivering more scans, checks and tests than ever before as we support the NHS in its biggest ever catch-up programme.” Mr Johnson is also planning a major housing announcement, as part of a concerted effort to move the spotlight on to his policy agenda. The Government has been working on plans to extend the right to buy, giving housing association tenants the right to purchase their homes.

Latest figures from NHS England show the number of people waiting two years for treatment has more than halved since February – falling from 23,778 to 9,146 last month. There are nearly 4,300 more doctors than last year, and more than 11,800 more nurses.

Mr Johnson’s team will be relieved if the focus shifts away from the Partygate scandal.

People across the party are waiting to learn if Sir Graham Brady, who chairs the 1922 group of backbench MPs, has received the 54 letters required to trigger a vote.

A supporter said: “If there is a vote of no confidence Boris would win. And unlike Margaret Thatcher, he wouldn’t quit.”

However, Mr Johnson’s critics remain determined to remove him, with one senior MP claiming the Prime Minister could destroy the party. The MP, who has submitted a letter to Sir Graham, said: “He is an existential threat.”

They said former Brexit secretary David Davis would be the right candidate to take over. Mr Davis is 73, but the source said: “Young cardinals like an old Pope.”

In a further blow, financier and Conservative donor Michael Tory demanded an “immediate change of leadership” and warned the party could be out of power for a decade.

Mr Tory, who is understood to have given £340,000 to the party since 2010, told The Times: “I can only resume donating if there is an immediate change. And it has to be now – before it’s too late to avoid a richly deserved obliteration at the next election.”

Conservatives who turned former Labour bastions from red to blue at the last election have urged the party to unify behind Mr Johnson.

Brendan Clarke-Smith, who won Bassetlaw for the Conservatives, called on the party to hold its nerve.

He said: “The Prime Minister has shown he is a winner, not just at the ballot box but also when delivering on the big issues – whether that’s getting Brexit done, our world- leading vaccination programme or standing up to Vladimir Putin.

“He has managed to gain support from all over the country and across all sections of society with his vision for levelling up the whole UK.

“We must go forwards together, not lose our nerve at this crucial period with unnecessary division.”

Mark Jenkinson, who ousted Labour from the Workington seat, said: “My constituents are clear to me, week in and week out, that our focus should be on delivery rather than Westminster navel-gazing.”

Lia Nici, who won Great Grimsby for the Tories at the last election, warned against attempts to “depose the most successful Conservative Prime Minister in a generation”, saying: “Removing Boris Johnson would only serve the interests of Labour and the liberal elite ‘blob’.”

A red wall MP did not hide his anger at “Tories in the south” whom he accused of trying to “overturn the Brexit decision by removing the Prime Minister”.

Suggesting they should “go and join the Lib Dem party”, he said: “The reason we got an 80-seat majority was to get Brexit done.”

Robert Hayward, a Tory peer and election expert, anticipates a confidence vote “by the end of the month”.

While he expected the PM would win, he cautioned that “people who are forced into a position of having a vote of confidence don’t finish up staying for long”.