Boris Johnson was told off by House of Commons Speaker Lindsay Hoyle after the Prime Minister attempted to ask Sir Keir Starmer whether he supported the reinstatement of Jeremy Corbyn’s membership to the Labour Party. The Speaker firstly reminded Mr Johnson he was the one supposed to answer questions, being during Prime Minister’s Questions time. But as the Prime Minister tried to hit back, Sir Lindsay threatened Mr Johnson with cutting him off.

The Speaker said: “I think I’ll point to the fact that it’s actually Prime Minister’s Questions, not the leader of the opposition’s questions.”

Mr Johnson argued his was a “reasonable question” to be put to the leader of the Labour Party.

“And thankfully we’ve got the sound, we don’t want to lose it.” 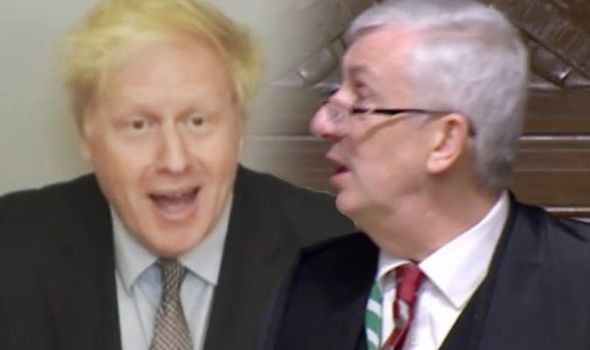 Sir Keir Starmer pressed Boris Johnson over the leaking from his Government of details of Covid-19 restrictions.

He said: “Over the summer, we saw repeated leaks about which areas would go into restrictions. The Prime Minister’s plans to go into a second national lockdown were leaked all over the national papers, resulting in a truly chaotic press conference and we’ve seen more leaking in the last 24 hours.

“This serial leaking is causing huge anxiety to millions of people about what’s going to happen next. Now I know there’s supposed to be an inquiry under way, but can the Prime Minister tell us: is he any closer to working who in his Government is leaking this vital information?”

Mr Johnson responded: “Mr Speaker, I’ve already told you that as soon as we have any information about anybody leaking, we’ll bring it to the House.

“But I may say, I think (Sir Keir) is really concentrating on trivia when what the people of this country want is to see his support, and the support of politicians across the House, for the tough measures that we’re putting in to defeat coronavirus.”