Writing on Twitter, ITV’s Royal Correspondent Chris Shipp said Mr Johnson met the monarch in between looking for new ministers and sacking levelling up minister Michael Gove. Mr Shipp asked “what on earth” the Queen and Mr Johnson discussed as Downing Street is in complete disarray following a mass rebellion by Conservative MPs.

He said: “Boris Johnson DID have his weekly audience with the Queen this evening (in between seeking new ministers and sacking Michael Gove).

“One wonders what on earth the Queen and the PM spoke about or quite what she asked him about what’s happening to Her Majesty’s Government tonight??”

The Queen had been staying in Wood Farm, a five-bedroom cottage on the Sandringham estate in Norfolk.

However, on Wednesday morning she was seen returning to Windsor Castle which is now her main residence. 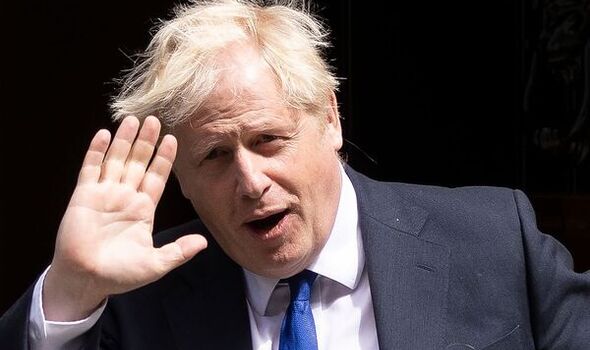 Despite a number of health problems in recent weeks including ongoing mobility issues Her Majesty appeared to be in good health.

However, it is believed that the monarch held her meeting with the Prime Minister on the telephone.

The Queen no longer lives permanently at Buckingham Palace which is only a short distance away from Downing Street.

He said: “The Queen is expected to hold her weekly audience with the Prime Minister tonight via telephone.”

In extraordinary scenes, around 46 MPS have resigned from Government since Tuesday evening in protest at Mr Johnson’s conduct and standards.

The resignations have been precipitated by Mr Johnson’s admission that he knew about allegations about MP Chris Pincher in 2019 before hiring him as a chief whip earlier this year.

It comes only weeks after the Prime Minister won a confidence vote from the Parliamentary Conservative Party.

Under the current rules, Mr Johnson cannot be challenged with another confidence vote for almost 12 months.

Mr Johnson dramatically sacked Mr Gove on the phone after his fellow Brexiteer is said to have told him to resign, reports state.

Supporters of the Prime Minister have labelled the Surrey Heath MP as a “snake”.

Mr Johnson has remained defiant with the former London Mayor adamant that he won’t resign.