Home » Politics » Both Candidates Agree: Trump’s Crowds Are Bigger, and They’re OK With That

While President Trump still thrills to the roar of a crowd, even during a pandemic, Joe Biden has found a new way to get audience feedback: through honking horns at his drive-in rallies. 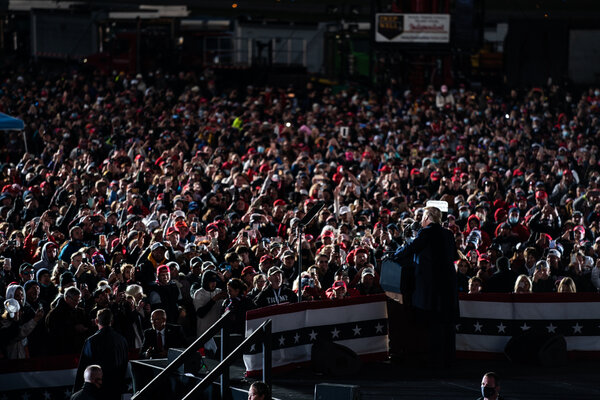 WASHINGTON — For President Trump, the only thing that really matters is the size of his crowds. For Joseph R. Biden Jr., the road to the White House is full of honking cars.

As the two candidates for president closed out the final weekend of the 2020 campaign, which is unfolding in the middle of a health crisis, their venues not only contrasted their radically different positions on the coronavirus pandemic but offered revealing windows into the core of their political identities.

Mr. Trump is defined by his obsession with the size of his rallies, an almost inevitable bookend to his boastful exaggerations about the number of people who attended his inauguration four years ago. For the president, campaigning is a show, and its success is defined by the ratings that come with it: the crowds.

Mr. Biden has abandoned that instinct for large turnout in favor of drive-in rallies that underscore a central message of his campaign: that he will be more responsible than Mr. Trump in the face of a deadly pandemic. Mr. Biden’s socially distanced rallies, which draw hundreds, not thousands, of people in their vehicles, are the physical manifestation of his willingness to sacrifice numbers for safety.

Both men put those competing identities on display as they dashed across battleground states over the weekend.

Mr. Trump was holding rallies in five states on Sunday after spending a full day in Pennsylvania on Saturday. As he crisscrossed the country, the president repeatedly marveled at the thousands of people who had turned out to see him and viciously mocked the smaller gatherings for his Democratic rival.

“And then you’d have like two cars honk — honk, honk,” Mr. Trump said in Washington, Mich., on Sunday, as he complained repeatedly about the cold wind and the snow that fell throughout his remarks. 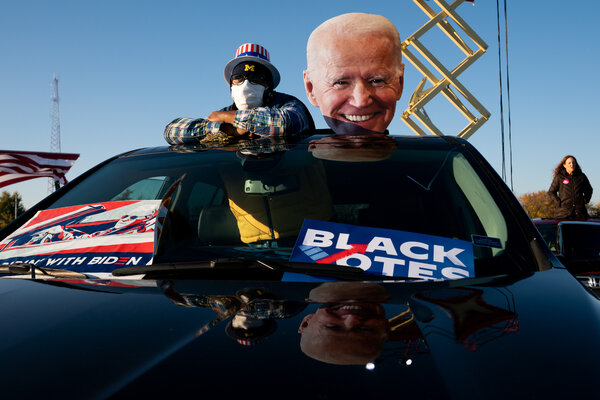 Mr. Trump bragged about attracting bigger crowds than Mr. Biden and former President Barack Obama, who campaigned together on Saturday. “I hate to say it, Obama doesn’t draw any better,” he said. “They went as a twosome and they had less people.”

Mr. Trump enters his rallies to pounding music and crowds roaring their approval — with few people wearing masks — as he throws Make America Great Again hats into the stands like T-shirts at a basketball game. Aides say that he feeds off the energy of his audiences, and that the rallies have convinced Mr. Trump that he will win despite polls showing him trailing in almost all of the competitive states.