The former Speaker of the House of Commons, widely blamed by Brexiteers for delaying the process of the UK exiting the European Union during his time in the position, did not hold back during his appearance on BBC1’s Question Time. Mr Bercow said: “It’s an absurd act of gunboat diplomacy, it’s a bit of jingoistic sabre rattling.

“And if you tell me or anybody does tonight, that the despatch of those ships, and the fact of election day to day are unrelated, I can say only that you won’t believe anything.

“It’s juvenile, it’s down market, it’s not constructive, it doesn’t advance the cause of the arguments that need to be resolved.”

Characteristically, Mr Bercow also tied the decision to the UK’s departure from the bloc, adding: “And the truth of the matter is that the problem flows as so many things persistently do from Brexit. 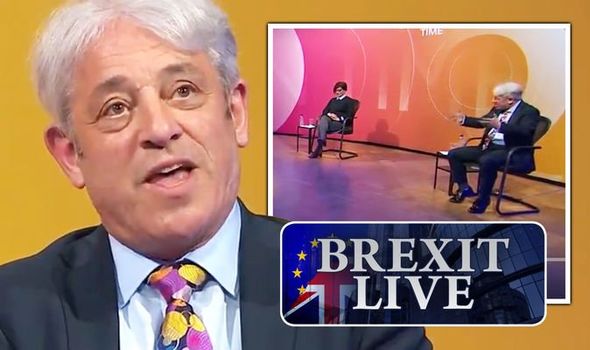 “And with the detail with the interstices of the system with the specifics negotiators have to deal with, it isn’t going to be addressed by a kind of Palmerstonian populism.

“And, frankly, Britain can do better than that.”

Diplomatic efforts with France will be stepped up to prevent a repeat of the Jersey fishing dispute, which saw French fishing boats threaten to blockade the harbour yesterday before pulling back.

The Royal Navy will continue to keep a watch on events but the two vessels deployed to the Channel Island were ordered back to port after the French protest ended.

[SCROLL DOWN FOR REGULAR UPDATES]

DON’T MISS
Museum of Brexit gets its first items – but when will it open? [INSIGHT]
EU ‘badgers’ UK to pay up settlements of Brexit divorce bill [REVEAL]
Brexit doom mongers dismantled as UK confidence up [SPOTLIGHT]

7.41am update: UK gets new lung cancer drug under international scheme thanks to Brexit deal

A lung cancer drug has become the first treatment authorised under an international scheme the UK was able to join after Brexit.

The nation was signed up to the US-led Project Orbis in January to work with other countries to review and approve promising cancer ­medicines quickly and efficiently.

Hundreds of patients are now expected to benefit from the new post-surgery treatment.

The UK’s involvement was revealed by the Daily Express in October, when Health Secretary Matt Hancock announced “teaming up with the fastest regulators in the world to get safe licences as fast as the science allows”.