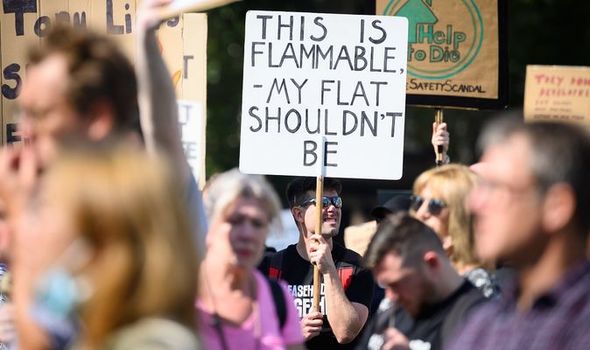 It came as the Housing Secretary confirmed plans for a £4billion fund to help carry out renovations in the wake of the deadly Grenfell Tower fire in west London. The cash will help tens of thousands facing huge repair bills through no fault of their own. Four and half years after the Grenfell tragedy exposed the dangers of cladding, Mr Gove said that no leaseholder living in a block above 11 metres would have to pay for fixing dangerous problems.

He told the Commons he had “an absolute assurance” from Chancellor Rishi Sunak that he was ready to impose taxes on the sector if they were not prepared to come forward with a solution.

Mr Gove said: “We will take action to end this scandal and protect leaseholders. We will make industry pay to fix all the remaining problems and help to cover the range of costs facing leaseholders. Those who manufactured combustible cladding and insulation – many of whom have made vast profits, even at the height of the pandemic – they must pay now instead of leaseholders.”

Cladding on flats and tower blocks became a major issue after the Grenfell Tower fire in 2017 which led to the deaths of 72 people. The controversial building material, which was said to improve the insulation and look of blocks, has been dubbed a “silent killer”.

Mr Gove has written to the building industry, giving a deadline of early March for companies to agree a fully funded plan of action. His letter asks the sector to agree to make financial contributions to cover the cost of repairing unsafe cladding on 11 metre (36ft) to 18 metre (59ft) buildings.

Dame Judith Hackitt, who chaired the Independent Review of Building Regulations and Fire Safety following the Grenfell fire, said the announcement would come as a “great relief to the many leaseholders”. She added: “Those who caused the problem now need to step up, take responsibility and show some leadership. This problem has gone on for too long and we need a rapid solution, not months of debate and negotiation leaving innocent leaseholders in further limbo.”

But Stewart Baseley, executive chairman of the Home Builders Federation, said that as well as developers and government, other parties should also contribute. He said: “[That] not least [would include] material manufacturers who designed, tested and sold materials that developers purchased in good faith that were later proved to not be fit for purpose.”