Home » Politics » Can you read? Row erupts as Tory peer told to grow up over Brexit betrayal claim

Lord Moylan made the comment about Labour as he responded to a tweet by Mujtaba Rahman, the managing director for Europe at Eurasia Group. Mr Rahman posted a thread with a series of predictions about the implications of Russia’s invasion of Ukraine on the EU.

Mr Rahman said Vladimir Putin’s brutal attack on Kyiv could lead to French President Emmanuel Macron’s European Political Community vision of a “wider circle” of European states who are “linked to EU but not part of it”.

He added that this could one day “offer a path for Labour to co-operate” with the bloc.

Lord Moylan replied to Mr Rahman’s tweet: “Interesting that he expects @uklabour to blaze the trail of betraying Brexit. I agree.”

But Mr Rahman furiously hit back insisting the Tory peer had misconstrued his tweet. 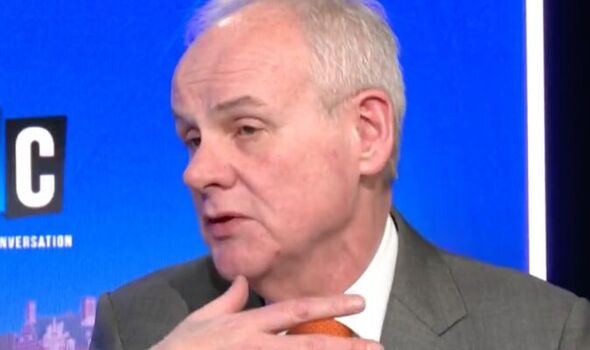 He said: “Are you illiterate? Can you read? This has nothing to do with ‘betraying Brexit’.

“The European Political Community is about co-operation with the EU – not membership.

“Either grow up, stop writing absurd nonsense across my tweets of I’ll block you. Your choice.”

Lord Moylan responded: “How can you be so naive? The EU mindset simply doesn’t do ‘cooperation’ with its near democratic neighbours. It does subordination. (Ask Switzerland.) 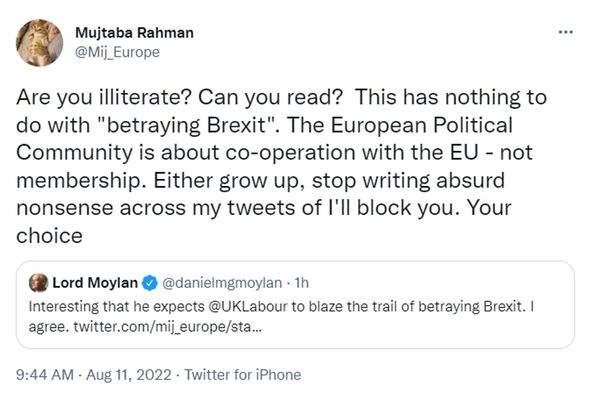 “The new/revived concentric proposal is all about that. You think it will attract @uklabour – I agree, precisely as a path back.

“A better question is how the EU is going to cooperate (as an equal) with a friendly, democratic, major power on its doorstep that simply will not be subordinated into concentric architecture that has the EU at its centre.

“Six years after the Brexit vote, Brussels has no idea.”

It comes after Sir Keir Starmer last month insisted that if he came to power he would not reverse the UK’s departure from the bloc.

The Labour leader made the comments as he set out a five-point plan to “make Brexit work” in a speech at the Centre for European Reform at an event at the Irish Embassy in London.

Sir Keir ruled out rejoining the EU, single market or customs union as he vowed to move on from “arguments of the past”.

The Labour leader said: “There are some who say, ‘We don’t need to make Brexit work – we need to reverse it’. I couldn’t disagree more.

“Because you cannot move forward or grow the country or deliver change or win back the trust of those who have lost faith in politics if you’re constantly focused on the arguments of the past.

“We cannot afford to look back over our shoulder because all the time we are doing that we are missing what is ahead of us.