People in northeast England will not be able to meet others outside their household from today – as Lancashire is also expected to be placed under tighter restrictions.

More than 10 million people across the UK are now in lockdown, after new restrictions in Northumberland, North Tyneside, South Tyneside, Newcastle-upon-Tyne, Gateshead, Sunderland and County Durham began at midnight.

Residents in these areas are banned from socialising with others outside their household or bubble, food and drink venues are restricted to table service only and all leisure and entertainment venues must close at 10pm.

Other areas under tighter lockdown restrictions include parts of Scotland, south Wales, the northwest of England, Yorkshire and the Midlands.

Health Secretary Matt Hancock is expected to make an announcement this morning which will outlaw socialising with different households in homes, private gardens, public parks, restaurants, and pub beer gardens.

People will be urged to only use public transport for essential trips – but the rules are not expected to include a complete ban on mixing with other households or a 10pm curfew for bars and pubs.

However, two-thirds of the seaside resort of Blackpool will not face the tougher restrictions.

The county has just seen its largest daily rise in new cases so far, recording 250 further infections on Thursday.

Meanwhile, there are also reports Merseyside and Leeds could be the next to be placed under similar restrictions.

Coronavirus cases have been rising across the UK, with a further 3,395 confirmed infections and 21 deaths reported on Thursday.

Addressing the further restrictions in the North East, Health Secretary Matt Hancock said there had been “concerning rates of infection”.

“We agree with the local councils that we must follow the data and act and the data says that we must act now so that we can control the virus and keep people safe,” he said.

“And I know that the people of the North East will come together to beat this virus, as defeat it we must.” 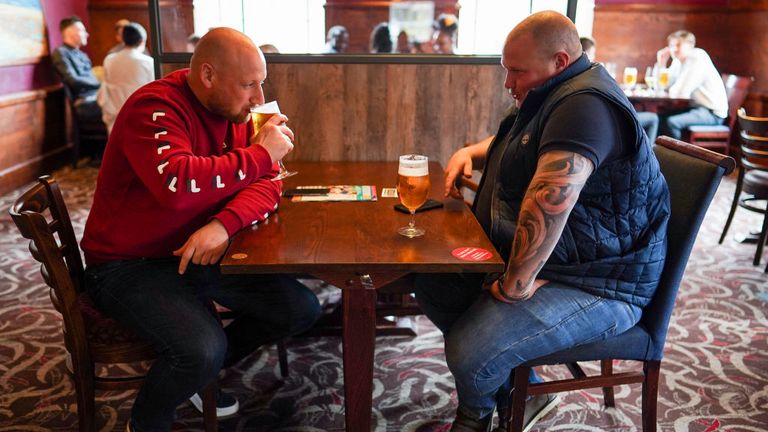 According to Sky News data, the two-week coronavirus infection rate per 100,000 in the seven local authority areas facing new restrictions are:

On Thursday morning, health minister Edward Argar told Sky News: “In the North East we are seeing a spike in infections. It is exactly what we have seen in the North West.

“We monitor that rate. Where we need to, we step in and take action.”

Mr Argar said, in northwest England, the rise in infections was due to people not adhering to social distancing rules with different households meeting up in close proximity.

“That’s one of the ways in which that transmission can increase.”